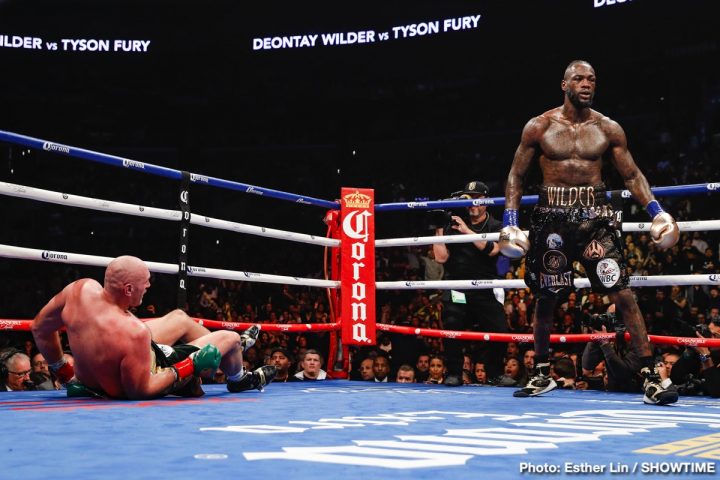 By Jeff Aranow: WBC heavyweight champion Deontay Wilder gave Tyson Fury a lot of credit for getting up to continue fighting after getting dropped HARD in the 12th round last Saturday night at the Staples Center in Los Angeles, California. At the post-fight press conference, Wilder (40-0-1, 39 KOs) showed class in reacting to the 12 round split draw the judges scored the Fury fight.

Wilder bore no ill will towards the three judges for failing to give him the victory. Wilder knocked Fury down in the 9th and 12th, and he felt that should have been enough for him to be given the win.

Afterwards, Wilder was happy his fight against the 6’9″ Fury lived up to the exceptions from the boxing fans had for it. The fight was televised on Showtime PPV, and it cost the fans $64.99 to order it in the U.S. That’s not cheap. The fans want entertainment for their money, and there were a lot of fights on the undercard of the Wilder vs. Fury card last Saturday that failed to impress the fans. But at least the boxing public saw a good main event between Wilder and Fury, even the outcome was hugely disappointing.

Wilder vs. Fury replay will be televised this Saturday, December 8 on SHOWTIME starting at 9:00 p.m. ET/6:00 p.m. PT. The boxing fans that didn’t order last Saturday’s Wilder vs. Fury fight on SHOWTIME PPV will now get a chance to watch the fight on regular SHOWTIME. Wilder-Fury is a candidate for Fight of the Year for 2018.

“One thing I’m happy about, this fight lived up to the hype,” Wilder said at the post-fight news conference in taking about his 12 round split draw against Fury. “You know, many a times we’ve seen fights being promoted and they talk a good game, you know, they got the hype going, and then when you get in the fight it’s not as hype as the talking was. But in this fight it actually was.”

The fight was entertaining at times, but there was a lot of non-action from the 6’9″ Fury that was less than interesting to watch at times. Fury spent a good portion of the fight trying to make Wilder miss.

Wilder accused Fury of slathering his body with baby oil during the fight to make himself slippery to keep from getting caught by the powerful Alabama native. Even though the 256 pound Fury had a 44 lb weight advantage over the 212 lb Wilder, he fought like he was the smaller fighter, moving constantly and not wanting to stand and fight. Wilder fell behind in the fight through the first eight rounds. Going into the 9th, Wilder started to unload with everything he had on his shots looking to knockout Fury with a single shot. This hurt Wilder’s punch accuracy, which was quite low in the fight, but it resulted in him knocking Fury down in the 9th and the 12th.

Wilder was trying to KO Fury with every punch he threw from the 9th until the end of the fight, but he missed a lot of his best shots. The two shots that resulted in Fury hitting the deck in the 9th and 12th were punches that were tremendous shots. Wilder doesn’t know how Fury got up from the knockdown in the 12th and neither do many of the boxing fans that saw the fight.

“I don’t know how he got up, though,” Wilder said. I don’t know why they ain’t start the count earlier, you know, but we don’t make no excuses. I started overthrowing my right hand, because I really wanted to get him out of there. It felt like he had baby oil on him too, he was slippery, but all in all I had a lot of fun,” said Wilder.

I don’t know if Fury had baby oil slathered all over his body last Saturday night, but it wouldn’t be surprising. Fury was looking for any edge he could get for him to win the fight with the powerfully built and much lighter Deontay. Fury didn’t have the same athleticism that that Wilder possessed, so he needed to gain an edge by using his slithery, snake-like defensive skills to keep from getting hit. Fury had so much sweat on him due to him still being overweight that it might have given Wilder the impression that he had poured baby oil on his upper body, but it probably wasn’t the case.

Fury looked like he was carrying around an extra 20 lbs of fat on his frame last Saturday night. He wasn’t as trim and tone as he was in his fight against Wladimir Klitschko in 2015. That’s not astonishing though, as Fury had started his his training for comeback at nearly 400 lbs. To take off 150+ lbs of fat was ultimately too much of a task with the time that he had. Fury could have taken all the fat off if he’d been given another month or two of training to burn off the weight, but he wasn’t going to be able to do in time for the fight against Wilder last Saturday night. Fury ran out of time, and needed to take the fight with a visible spare time and a thick coat of body fat

Mexican judge Alejandro Rochin scored the fight for Wilder 115-111, Canadian judge Robert Tapper had Fury winning 114-112 and British judge Phil Edwards scored it a draw at 113-113. Rochin obviously preferred the all-action style of Wilder over the slithery, defensive-minded style of Fury. The way the fight turned out, it came down to the style of fighting that the judges preferred. Rochin saw the Wilder vs. Fury fight much in the same way that a lot of boxing fans did in preferring Wilder’s brawling style over Fury defensive method of playing it safe. Fury wasn’t given a loss, but he didn’t do enough to win the fight with the way he chose to focus mostly on defense and not on offense. Fury might have lost track of the fact that he was the challenger and not the champion in the fight.

Some boxing fan saw Fury as the winner of the fight, but it was always going to be hard for him to get the nod with the judges given that he was fighting in Wilder’s home country of the United States. Getting knocked down twice made it even tougher for Fury to be given the decision. Fury had a lot going against him when it came to the scoring of the fight.

These are things that hurt Fury’s chances of winning last Saturday:

– Moving too much and not fighting

– Lack of punching power in comparison to Wilder

– Fury gassing out in the championship rounds

– Fighting in a foreign country

A rematch between Fury and Wilder would be in order. Both guys say they want to fight each other again, but it remains to be seen if it’s possible. Fury said he’ll go back home to the UK and get with his management to reconfigure what he needs for a second fight to take place. That means Fury will likely ask for more money. Whether his purse demands make sense or will be decided by Wilder’s management. Fury’s promoter plans on writing to the World Boxing Council to try and push for a rematch against Wilder. Deontay has a mandatory defense due against Dominic Breazeale. If the WBC orders that fight, then Fury will need to wait for a rematch after that contest. There’s no telling whether Wilder beats Breazeale. That’s a tough one. Breazeale is 6’7″ just like Wilder, and he’s got good punching power. It could be a hard fight for Wilder if he’s at his best. He can’t afford to struggle against Breazeale like he was doing against Fury last Saturday. If that fight gets made, it would be Wilder’s second in a row against a very tall opponent. Breazeale would be a good warm-up for Fury, who would help Wilder get ready for the 6’6″ Anthony Joshua.