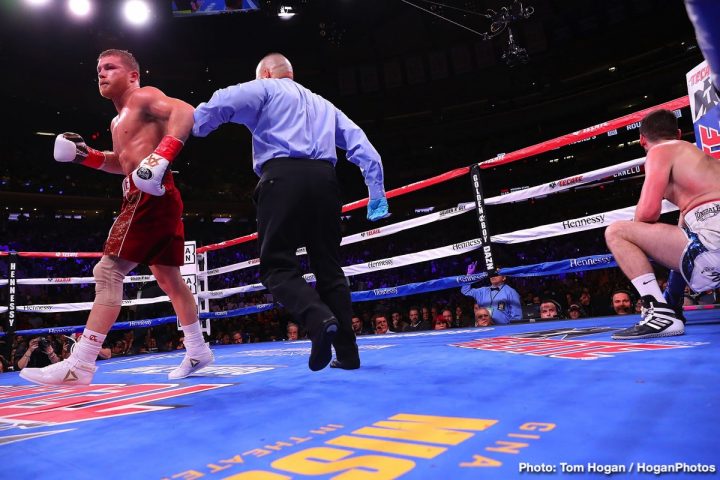 By Jim Dower: Saul Canelo Alvarez did what everyone expected him to on Saturday night in dominating WBA World super middleweight champion Rocky Fielding every second of the fight before stopping him in the 3rd round to possibly setup a third fight against Gennady Golovkin.

Canelo, 28, says if the boxing fans want the third fight with Triple G, he’ll give them what they want. But as far as he’s concerned, he already showed that he’s the better fighter by defeating Golovkin (38-1-1, 34 KOs) by a 12 round majority decision on September 15.

“I felt that it [the Canelo-GGG rivalry] ended on September 15, and I showed that I was best, but there were two great fights, there’s no secret. If the people want it, we can make it,” Canelo said after the fight. “What I always want to do is make the best fights, whether they’re for a world title or not. I’ve made great fights where it wasn’t for a world title.”

The problem with making a third Canelo vs. Golovkin fight is there’s not a huge demand for that fight right now. Even though the two fights were close, a lot of boxing fans are burned out on seeing Canelo fight Golovkin. They want to see Canelo fight other people, but right now there’s no one at middleweight that the fans really want to see him fight other than Jermall Charlo and GGG to some extent.

Golden Boy Promotions allowed Daniel Jacobs inside the ring tonight after the fight, which is a huge hint about who they plan on matching Canelo against next. Like the Fielding fight, there won’t be a lot of interest from the casual and hardcore boxing fans in a Canelo vs. Jacobs fight. The reason for that is obvious. Jacobs lost to Golovkin in 2017 by a 12 round decision. Since that fight, Jacobs hasn’t looked good in winning his last three contests against Sergiy Derevyanchenko, Maciej Sulecki and Luis Arias. Jacobs almost lost to derevyanchenko and Sulecki.

“Right now, what I can tell you is I want to make the best fights for the public,” Canelo said.

If Canelo is serious about wanting to fight the best for the fans, then he needs to fight these guys: Jermall Charlo, Callum Smith, David Benavidez and Jose Uzcategui. Gilberto ‘Zurdo’ Ramirez is moving up to light heavyweight, so he’s out as far as a possible opponent for Canelo’s next fight. The most courageous thing for Canelo to do would be to fight Callum Smith. However, the fact that Jacobs was let inside the ring by Golden Boy Promotions tonight after the Canelo-Fielding fight suggests that they’ve already made their mind up about who he’s going to fight next on May 4 on Cinco de Mayo.

Fielding looked embarrassingly bad tonight in getting bounced around the ring like a rubber ball by Canelo for the short fight. Fielding was getting knocked repeatedly by Canelo, and he seemed to lose what ever senses he had coming into the fight after the first knockdown in round one. Fielding was standing straight up like a bowling pin in front of Canelo, letting him tee off on him with body and head shots.