Canelo not sure if he’ll go back down to 160 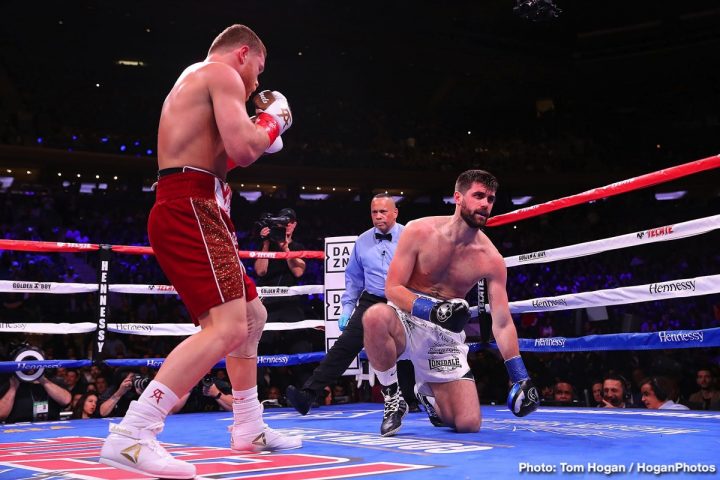 By Mike Smith: Saul Canelo Alvarez (51-1-2, 35 KOs) surprised fans by saying he’s now sure if he’ll move back down to middleweight [160 lbs] after his superb 3rd round knockout victory over WBA ‘regular’ super middleweight champion Rocky Fielding (27-2, 15 KOs) on Saturday night at Madison Square Garden in New York. Canelo felt good and looked great in destroying Fielding in a four-knockdown performance on DAZN. The ratings are likely going to be through the roof for the streaming giant, as Canelo’s fight with Fielding was free.

Fielding gave it his best shot, but he couldn’t stay on his feet from the withering body attack from Canelo. If the referee hadn’t stepped in to stop the fight in the 4th round after the fourth knockdown of the contest, the fight might have turned into a comedy with Fielding going down numerous times. Canelo couldn’t keep Fielding down, because he was hitting him with single shots to the body and head. Fielding wasn’t getting hit by hots he didn’t see or hard combination punches that would make it difficult to get back up.

“We have to see that. I have to talk to my team, enjoy the holiday. I’ll talk to my team, but right now, without a doubt the best fights,” Canelo said when asked which weight class he’ll fight at in his next fight on May 4.

There’s no point in Canelo going back down to 160. He already beat the fighter that was considered to be #1 in that weight class in Gennady Golovkin. By going back down to middleweight, it would be a letdown for the Mexican star in facing guys that are perceived to be lesser fighters than GGG. Staying at super middleweight would give Canelo the opportunity to show that he’s the best fighter in that division by defeating the top dog Callum Smith at that weight. Canelo showed tonight that he could beat a very good fighter in 31-year-old Fielding, and prove that the weight is not a big deal for him. It was only eight pounds difference between the two weight classes, and Canelo showed that his boxing ability is too good for guys that have more size than him.

What Canelo wants to do is give the boxing fans a fight that interests them. Canelo personally says he’s not interested in fighting Gennady Golovkin again after proving he’s better than him last September. It’s now up to Canelo, his promoters at Golden Boy Promotions and the fans in which division he fights at. The biggest fight out there for Canelo right now might be WBA Super World super middleweight champion Callum Smith (25-0, 18 KOs). He’s established himself as the best fighter at super middleweight after winning the World Boxing Super series tournament last September.

If Canelo does move back down to 160, it’ll be hard for him not to fight Golovkin again. Although the Kazkahstan fighter lost his last fight to Canelo, he still remains highly popular, and there are enough boxing fans that still want to see the two fighters face each other again to make it a successful event.

Giving the boxing fans what they want will be entail some risk on his part, as it would mean that he’ll need to remain at super middleweight to face unbeaten Callum Smith on May 4, either at the T-Mobile Arena in Las Vegas, Nevada or in the UK in front of a packed crowd in a large stadium in Liverpool. There would be a lot of interest in a fight between Canelo and Callum Smith. First off, it would be a revenge match for Callum, since Canelo beat his brother Liam Smith by a 9th round knockout two years ago in September 2016. That was when Liam held the World Boxing Organization junior middleweight title. Callum has always been considered the best fighter of the Smith brothers. If Canelo can prove that he’s better than Smith or some of the other super middleweight champions, it would be a big accomplishment for him. Canelo’s promoters at Golden Boy will likely resist having him stay at super middleweight. They would obviously know the kinds of problems Callum Smith would bring to Canelo. Moving back down to middleweight will mean that Canelo will face one of the champions like Daniel Jacobs or Demetrius Andrade.

The super middleweight division is a weak one once you get past Callum. Canelo can win a title and stay a champion for a long time in that weight class. There are fewer talented fighters than at middleweight. At 160, Canelo has to worry about guys like Gennady Golovkin, Jermall Charlo, Demetrius Andrade, Daniel Jacobs, Sergiy Derevyanchenko, Rob Brant and Billy Joe Saunders. Some of the top junior middleweights will soon be moving up to 160, like Jarrett Hurd, Jermell Charlo and Jaime Munguia. The middleweight division is going to be stacked for a long time to come. Canelo would be better off staying at 168, and becoming a big fish in a small pond.