Brook agrees to fight Khan at 147 with rehydration limit 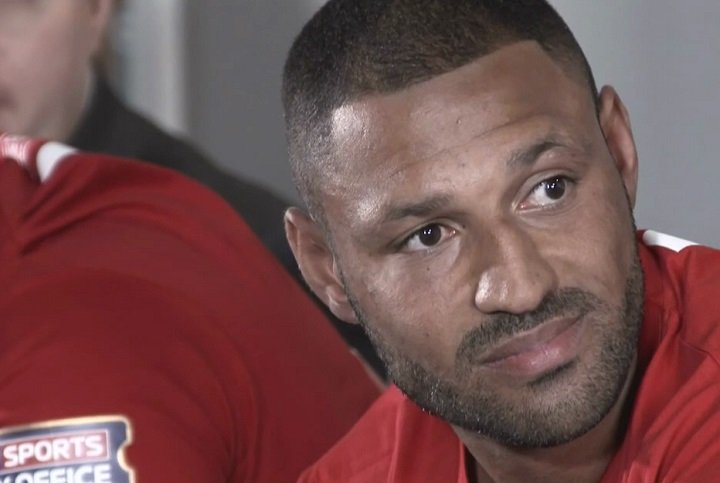 By Scott Gilfoid: In a sign of desperation on Kell Brook’s part, he’s agreed to fight Amir Khan at 147 with a 10 pound rehydration limit that he’s been asking for following last night’s victory by the ‘Special One’ over Michael Zerafa (25-3, 14 KOs) at the Sheffield Arena in Sheffield, England.

“I will go down to welterweight, I will do the rehydration, we will do the deal live on television,” Brook said to Sky Sports about him agreeing to the 10 pound rehydration limit that Khan is asking for from him.

Brook’s promoter Eddie Hearn says they’re not going to wait around for Khan. If he doesn’t agree to a fight against Brook, then he’ll move on and possibly challenge WBA Super World junior middleweight champion Jarrett Hurd next. Brook is now the mandatory for Hurd so Hearn can easily setup the fight if that’s what Kell wants.

If Brook didn’t intentionally look bad against Zerafa, then the only other proper explanation to explain why he was so terrible against him was his decision to boil down to 150 lbs for the fight. Brook losing weight to get to 150 pounds for the Zerafa fight likely took a lot out of him. Brook is basically a small middleweight at this point in his career. For a middleweight to drain down to fight at 150, it would take a lot of them. It doesn’t matter who they are. Brook would have been strong last night if he had weighed in at 160 lbs last Friday at the weigh-in rather than coming in at 150 lbs. Draining down to 150 took something away from Brook’s performance against Zerafa if he didn’t purposefully take it easy on him in order to get the Khan fight.

The combination of the 147 lb weight limit and the 10 lb rehydration clause is going to do a number on Brook when/if he faces Khan. Brook is going to be weakened with those two weight requirements against Khan. That doesn’t mean Brook will lose. He still could win, but he’s not going to be at his best.

As horrible as Brook fought last Saturday night against Zerafa, he still beat him by a wide 12 round unanimous decision by the following scores: 118-110, 119-109 and 117-111. Boxing News 24 gave Brook the win by a 11 rounds to 1 score. The only round Zerafa came close to winning was the 12th. The rest of the rounds, Brook landed enough hard shots to win them. It still looked like Kell was carrying Zerafa the way fighters do in taking it easy on a sparring partner in camp. The champions don’t normally smash their sparring partners. They use them for practice. Brook fought like he was inside the ring with a sparring partner last night. Since Brook has never fought like this before during his career, one can only think that he purposefully held back against Zerafa in order to give Khan the self confidence that he’s now a safe opponent for him to fight. If Khan didn’t have his spider sense turned on last night, he might believe that Brook is as bad as he looked against Zerafa, and will want to fight him.

Whether that was on purpose on Brook’s part or a sign that he’s over-the-hill at 32 is debatable. As the saying goes, ‘You’re only as good as your last performance,’ and for Brook, he’s looking something awful right now. If Khan (33-4, 20 KOs) has been holding back agreeing to the Brook fight for fear he’ll get knocked out by him, he could feel comfortable at looking at how he performed last Saturday night against the 26-year-old Zerafa. Brook doesn’t capable of beating any of the top welterweights, let alone a talented champion like Jarrett Hurd at 154.

Brook’s promoter Eddie Hearn is hoping his performance against Zerafa will lure Khan to agree to face him now.

“I think if I was Amir Khan, I’d be on the phone to take this fight,” said Hearn to skysports.com.

Brook’s lackluster performance was a little too bad in the eyes of this writer. It looked painfully obvious that Brook was holding back and missing with his shots on purpose in order to look dreadful against a guy that was no threat to beating. Zerafa lacked the power to hurt Brook so it wasn’t a situation where it would be risky to his health in staying in 1st gear for the full 12 rounds. The performance by Brook was similar to how Hurd (23-0, 16 KOs) fought fringe contender Jason Welborn (24-7, 7 KOs) last week on December 1 on the undercard of Deontay Wilder vs. Tyson Fury at the Staples Center in Los Angeles, California. Hurd looked like he was taking it easy on the 32-year-old Welborn to get rounds in and to take it easy in his first fight following shoulder surgery. However, after Welborn landed some better than expected shots in the 3rd and 4th rounds that got Hurd’s attention, he suddenly turned it on in round 4 to get a quick stoppage. It’s unknown whether Hurd would have taken his time and let the Welborn fight go into the later rounds or not if he wasn’t fighting so hard. Welborn forced hurd to shift from 1st to 4th gear in the 4th. Once Hurd did that, Welborn was quickly wiped out. Last night, Brook looked like he was taking it easy on the Australian Zerafa in not going for the coup de grace to finish him. Zerafa was the ideal opponent for Brook to KO, but for some reason the ‘Special One’ was holding back. The only logical reason Gilfoid can think of for Brook holding back is he was trying to lure Khan into fighting him by fighting poorly against a mediocre fighter. Khan would have done well against Zerafa last Saturday night had he been inside the ring with Brook. Zerafa looked slow, weak and easy to hit. In other words, Zerafa was the perfect opponent for Khan.

“Kell knows that was below par, and he’s had a long time out of the ring,” Hearn said. “After Khan boxed (Samuel) Vargas, Kell became the favorite, and check with the bookmakers after this one, Khan will become the favorite.”

Oh brother, Hearn sounds like he’s dreaming now. Even after Brook’s horrendous performance against Zerafa last night, the odds-makers are still likely going to have him as the favorite in a fight against Khan. It was just one bad performance by Brook, not four or five poor ones in a row. For Brook not to be seen as the favorite against a struggling welterweight with a history of suffering knockouts like Khan, he would need to look poor in a series of fights. The odds-makers aren’t going to change their predictions for a Khan-Brook fight based on just this one fight for Brook. They’re going to want to see Brook look dreadful over a series of fights before they start changing their odds. Now if Brook faces Hurd next for his WBA junior middleweight title, and he gets knocked out by him within six rounds, then maybe they’ll consider making Khan the favorite over Kell. There’s no way that Brook would have half-step against a talent like Hurd. If Brook were to fight in 1st gear the entire fight against Hurd, he’d get blasted to smithereens straightaway. Hurd would make easy work of Brook.


« PHOTOS: Loma vs. Pedraza, Dogboe and Lopez vs Menard – RESULTS