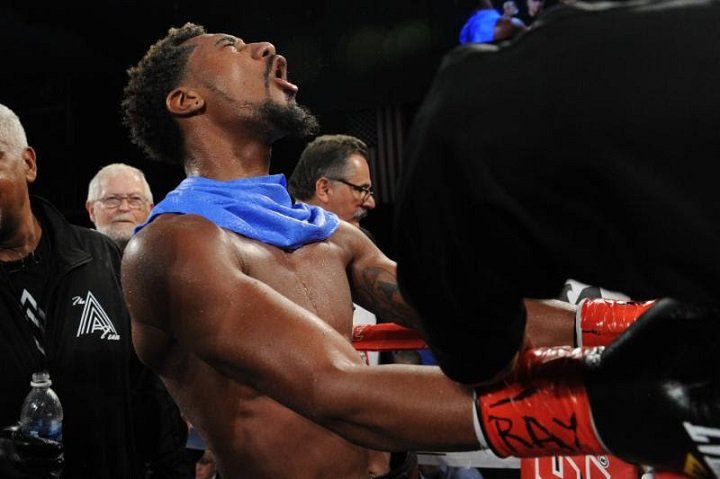 By Mike Smith: The World Boxing Organization has reportedly granted new WBO middleweight champion Demetrius ‘Boo Boo’ Andrade (26-0, 16 KOs) a voluntary defense for his next fight in February in his Providence, Rhode Island. Andrade will likely be the headliner on the February card on DAZN. Andrade needs to be fighting good opposition, not bottom dwellers if he wants to increase his popularity.

This is good news for Andrade’s promoter Eddie Hearn of Matchroom Boxing USA DAZN, as he wants to have him take a couple of fast fights against lesser opposition to get the rust out of his system, and to help build him up before he looks to angle him to fight Saul Canelo Alvarez, Daniel Jacobs and Gennady ‘GGG’ Golovkin. Hearn didn’t say who he plans on matching Andrade against next in February, but it’s very likely going to be one of these fighters from the WBO’s top 15:

The toughest options for Andrade out of that bunch is Sulecki and Culcay. Those would be tough fights for Andrade, especially Sulecki. Andrade had problems beating Culcay last year, so he might option. Hearn likes to match fighters from his own country against guys from his Matchroom Boxing stable. That means we could see Andrade defend his WBO middleweight title against 36-year-old Martin Murray (37-4-1, 17 KOs), who has fought for world titles an unbelievable four times during his 11-year pro career. Murray was supposed to fight previous WBO middleweight champion Billy Joe Saunders earlier this year, but Billy Joe suffered an injury and had to pull out of the fight. Matching Andrade against Murray would help increase interest from the UK boxing fans in seeing him fight. The DAZN fights are shown in the UK, so Andrade will be seen by a lot of British boxing fans potentially if he faces Murray.

Hearn would like Andrade to defend against Saunders, but he’s now suspended for the next six months, and he won’t be able to fight for three months after that. Saunders will be out of the ring for nine months.

For Andrade to increase his popularity enough to get fights against Canelo, GGG and Jacobs, he’s going to need fight in a more exciting style than what we saw from him against Kautondokwa. Andrade looked good at times, but he spent the second half of the fight on the run, looking tired, scared and unwilling to stand his ground. It was later revealed that Andrade had re-injured his left shoulder during the fight. But this wasn’t the first time that Andrade fought defensively in the second half of one of his fights. We saw the same thing from him in his fights against Alantez Fox and Jack Culcay. Andrade almost lost the Culcay fight after he gassed out, and gave up most of the later rounds. Andrade’s stamina and his fighting style is not a crowd-pleasing style that it needs to be for him to become a star. Assuming that Andrade won’t be able to improve his stamina, then he’s going to have problems if Hearn is able to get him a fight against Canelo, GGG or Jacobs. That might not matter though. Just getting the fight will give Andrade a big payday, so it won’t matter if he loses. But as far as Andrade being able to hold onto his WBO title to have a long reign, it’s not going to happen unless Hearn keeps him away from the talented fighters at 160.