Joshua says Whyte could be next opponent if he beats Chisora 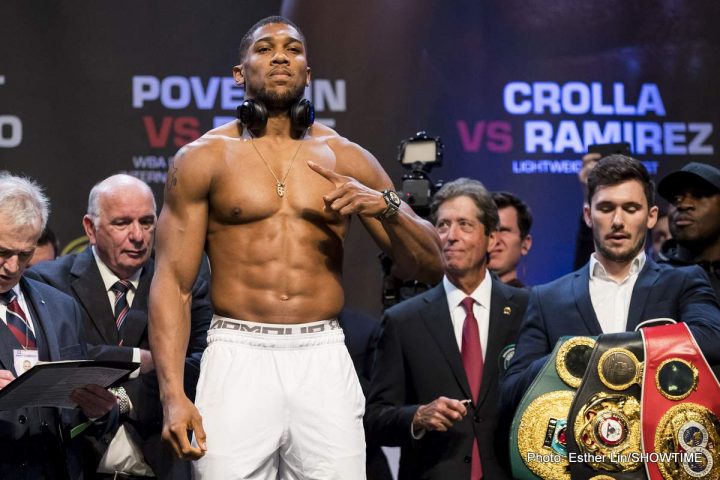 By Scott Gilfoid: Anthony Joshua says Dillian Whyte could be his next opponent or April 13 at Wembley Stadium if he defeats Dereck Chisora in their rematch on December 22, and if WBC champion Deontay Wilder doesn’t fight him on that date.

This is the first time that Joshua has come out and said that Whyte will likely be his April 13 opponent if he defeats Chisora. Until now, it’s been Joshua’s promoter Eddie Hearn who has been talking about Whyte being the one that would be facing Joshua at Wembley Stadium on April 13 if he defeats Chisora. The fact that Joshua is now confirming what Hearn is saying, it makes it academic. Joshua is on board with Whyte instead of a talent like Deontay Wilder or Luis Ortiz for his next fight.

Just why Joshua prefers Whyte over Wilder and Ortiz is the big question? Is Joshua afraid of those two talents? I mean, it’s plainly obvious that Whyte would have lost his last fight to Joseph Parker if the referee that worked the fight was on the ball. Joshua might as well be fighting Parker again because he was the winner on the night in the eyes of a lot of boxing fans that kept score. They noted the blown head-butt knockdown in the 2nd round and the numerous fouls that Whyte got away with. Wilder’s chances of fighting Joshua on April 13 are slim and none.

Since Joshua (22-0, 21 KOs) and Wilder are miles apart in terms of the purse split for their proposed unification fight, it’s likely that Whyte, 30, will be the guy that faces Joshua on the 13th of April.

Like a politician, Joshua says he wants the 35-year-old Chisora and Whyte to win the fight. Joshua isn’t willing to come out and say which of the two that he truly wants to fight, but it’s not hard to guess that he is hoping that Whyte is the guy that has his hand raised at the end. Whyte has been bringing in good money lately for his fights against Lucas ‘Big Daddy’ Browne, Joseph Parker and Robert Helenius. Chisora isn’t the same kind of money maker as Chisora

“Dillian, I want him to win because I want to box him again,” Joshua said to skysports.com. “Come April 13, if Wilder doesn’t step up, they’re my two options.”

Joshua, 28, isn’t entirely happy with the way he performed against Whyte in their fight in December 2015. Whyte rocked Joshua in the 2nd round with a big left hook to the head. Additionally, Joshua gassed out after two rounds, and he wasn’t able to get his second wind up until the 7th round. The way that Joshua faded against Whyte was similar to how he emptied his tank in the 6th round against Wladimir Klitschko in 2017, and it took him four rounds before he was able to replenish his diminished energy stores.

Joshua wants the Wilder (40-0, 39 KOs) fight, but his unwillingness to direct his promoter Eddie Hearn to increase the purse for the American fighter has kept the fight from happening. There was recently a glimmer of hope that Wilder could make a deal to face Joshua on April 13, but Hearn blew away any hope of the fight taking place by saying that Wilder would only get 20% of the revenue if his December 1 title defense against lineal heavyweight champion Tyson Fury (27-0, 19 KOs) brings in less than 300,000 pay-per-view buys. Hearn offering Wilder only an 80-20 purse split for the Joshua fight for April 13 means that Wilder would be receiving less than the 34% that Joseph Parker received for his fight against Joshua on March 31.

Joshua, 28, isn’t saying whether he’ll face Chisora on April 13 if he beats Whyte. Hearn is saying that he will look to match Jarrell ‘Big Baby’ Miller against Joshua on April 13 if Whyte loses to Chisora. Miller will need to win his fight against Bogdan Dinu, which seems very likely. Hearn promotes Miller as well as Whyte. So in all likelihood, Joshua will be facing one of Hearn’s Matchroom Boxing fighters on April 13. Wilder is the least likely to get the fight with Joshua. Hearn hopes Tyson Fury beats Wilder on December 1, because he thinks Joshua-Fury is a bigger fight in the UK than Joshua-Wilder.

Hearn would be right about that. However, Joshua vs. Fury wouldn’t interest the American boxing public, as neither of them are well known with the casual fans in the U.S, and it’s not a fight that could be sold to the fans. It would bring in subscribers to DAZN, but not likely a lot of them. Joshua needs to fight in the U.S for him to become a name with the American public, and it doesn’t appear that will happen anytime soon. Joshua’s promoter Hearn wants to have him fight against Jarrell Miller in the U.S, but that’s likely going to be a one off deal. Joshua will likely fight in the U.S once for the Miller fight and then not fight for ages until a he faces Wilder in a rematch. Joshua and Hearn are insisting that the first fight with Wilder take place in the UK for some reason, even though it would probably make more money in the U.S.

“Just be realistic on the negotiations because that’s your issue not mine,” Joshua said to skysports.com about him wanting Wilder to not ask for too high of a purse split for the fight between them.

It’s interesting that Joshua sees the purse split for the Wilder fight as HIS problem and not his own as well. It’s as if Joshua is disengaged mentally from what’s going on with the negotiations with Wilder, and with what needs to be done for the fight to get made. This isn’t a one-way situation.

It’s going to take give and take by both fighters for the Wilder-Joshua mega-fight to get made. Wilder wants a 50-50 split for the Joshua fight. A lot of boxing fans believe Deontay, 32, will be in the position to ask and receive 50% split if he destroys Tyson Fury in a fast knockout on December 1 in their fight on Showtime pay-per-view at the Staples Center in Los Angeles, California.

By the same token, if Wilder vs. Fury brings in huge PPV buys that dawrf the revenue that Joshua has been making for his fights against vulnerable fighters like Joseph Parker, Carlos Takam, Alexander Povetkin and Eric Molina in the UK on Sky Box Office PPV, then that’s going to put him and Hearn in the position where they’ll need to give Wilder the money he’s asking for if they want the fight to get made. The thing is, it doesn’t look like Hearn and Joshua want any part of fighting Wilder. If they did, they wouldn’t be offering him flat fees, which come out to an 85-15 split. That’s a sign that Wilder need not apply for a fight with Joshua. Of course, that’s not going to prevent Joshua and Hearn from name-dropping Wilder’s name like mad in order to give the appearance of interest in fighting him. As long as Joshua’s boxing fans continue to believe that a fight between him and Wilder is just around the corner, they’ll continue to buy into mismatches like Joshua vs. Whyte.