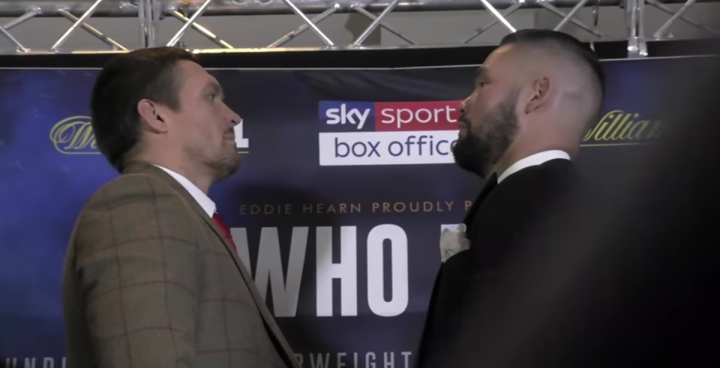 By Scott Gilfoid: Tony Bellew’s huge fight against Oleksandry Usyk is eight days away for November 10, and he’s ready to pull off a big upset in front of his fans at the Manchester Arena in Manchester, England. Bellew (30-2-1, 20 KOs) knows what he’s up against in facing the 31-year-old Usyk on Sky Box Office. Bellew rates Usyk as the No.2 cruiserweight in the history of the sport.

With the news announcement of the Dillian Whyte vs. Dereck Chisora fight this week and the attention from boxing fans on the Deontay Wilder vs. Tyson Fury fight, not much attention has been on the Bellew-Usyk fight. It’s as if it’s not taking place at all. Bellew is trying to get the attention of the boxing fans by making bold predictions. It’s very likely that he knows what’s in store for him next week when he gets inside the ring with IBF/WBA/WBC/WBO cruiserweight champion Usyk.

Bellew, 35, has the punching power to beat Usyk, but he’s going to need to land enough of those shots to get the job done. Usyk is going to land a lot more shots on Bellew than he’s been hit with for a long time. The reason for that is Bellew hasn’t been fighting good opposition for a while. Haye was injured, old shot when Bellew fought him twice and a row. Bellew’s wins over Makabu, Cleverly, Ivica Bacurin, Dos Santos and Masternak were victories over less than the best.

Bellew believes the fight will be won based on him having more confidence than the guys that Usyk has fought since turning pro. Bellew sees it as a fight that will be won based on self-belief. That’s an old fashioned idea that is often thrown a around. Unfortunately, most fights are won by guys that were blessed with more talent than their opponents. Bellew likely has more power than Usyk, but he doesn’t have the natural size that he possesses. Usyk is a natural cruiserweight. For his part, Bellew looks like a chunky light heavyweight, not like a cruiserweight. He’s clearly not a natural cruiserweight in terms of his frame, and he’s not used to getting hit a lot by cruiserweights despite having fought in the division from 2014 to 2016. Bellew hasn’t fought at cruiserweight since his fight against BJ Flores in 201

“Believe you me, I will get to Oleksandr Usyk and break his heart and take his soul,” Bellew said.

Bellew’s best weapon in his arsenal is his left hook that he likes to throw. It’s a formidable weapon when he’s got an opponent that is close enough for him to land it with full force. David Haye put himself at the mercy of Bellew’s left hooks last May by straying too close to his wheelhouse, making himself a target for those shots.

Bellew is also more than willing to bend the rules at times to land his power shots. We saw that in his fight against bottom dweller BJ Flores, who he nailed with a low blow followed by an uppercut in which he was holding the back of his head in their fight in 2016.

If Bellew is willing to cut corners by taking the fight into the mud against Usyk on November 10, he could beat him as long as the referee just stands by and watches the action without doing his job and taking points off from Bellew. You never know what you’re going to get in terms of officiating in fights. The match will be taking place in Manchester, England. One would hope that Matchroom Sport promoter Eddie Hearn finds a good referee that is a professional and doesn’t let fouling go unpunished during the contest. You can argue that Hearn has a lot to gain by Usyk winning this fight in impressive fashion. Look at it this way. If Usyk whips Bellew in fine fashion in knocking him out the way Adonis ‘Superman’ Stevenson did in 2013, then that will help build the Ukrainian star’s popularity for a later fight against Hearn fighter Anthony Joshua for 2019 or 2020.

The better Usyk looks the better it’ll be for Hearn, as he promotes him and he’s still young at 31. If Bellew wins by roughing Usyk up and potentially bending the rules enough for him to get the victory in his home country, there’s no real gain. Bellew plans on retiring anyway. He’s at the end of his career. In other words, there’s not going to be a Bellew vs. Joshua fight. If anything, there would be a rematch between Bellew and Usyk, likely in a neutral country.

I can’t see a second Usyk-Bellew fight taking place in the UK if the first match is tainted by a poor referee that fails to enforce the rules, and or horrible judging. What reason would there be for a second fight to take place in the same location when the first one was ruined by controversial scoring an inept referee? It would be like the mistake Gennady Golovkin and his team made in going back to Las Vegas, Nevada to fight Saul Canelo Alvarez in the same city and in the same venue as the first fight, which basically the entire world saw GGG win.

Let’s the referee and judges do a good job on November 10 and don’t ruin the fight either way. Supposing that Usyk wins a controversial decision or he gets away with fouling that leads to him winning, his win will be tainted and he won’t be able to move forward with his career on a positive note. Many boxing fans will likely say that Usyk got away with a robbery in Manchester due to him being the next star in Hearn’s Matchroom stable. That’s why it’s important to get quality judges and a competent referee that works the fight. If this was a knockout artist like Murat Gassiev or Yunier Dorticos fighting Bellew on the night, then it probably wouldn’t matter how awful the referee and judges were. Those guys would make sure that the officiating and judges have no say so in the outcome of the fight. Unfortunately for Usyk, he’s not a huge a huge puncher. He’s a pure boxer, who wins his fights by outclassing his opponents over 12 rounds. When Usyk does KO an opponent, he does so by battering them endlessly over the course of his fights. Usyk hasn’t shown the ability to KO the good cruiserweights though. He couldn’t knockout Mairis Briedis, Michael Hunter or Krzysztof Glowacki. Heck, Usyk almost lost to Briedis. I don’t put Bellew in the same class as any of those talents though, but he’s a good enough fighter

Bellew believes his punching power will carry deep enough in the fight for him to stop Usyk in the later rounds if the contest goes that far. I’m not sure if that’s true. Yeah, Bellew has knocked out some guys like David Haye, Ivica Bacurin and Edison Miranda in the late rounds. But those were not exactly super talents, were they? Haye was a good slugger during the prime of his career, but by the time he fought Bellew in 2017 and 2018, he was over-the-hill. Assuming that Bellew is counting on trying to score a knockout late in his fight with Usyk, he might be too punch drunk by that time in the fight to try and land anything big. I mean, Bellew is going to take a lot of shots from Usyk during the course of the fight, and it’s likely that he’s going to be worn out and fighting on fumes by the 10th round if he makes it that far.

What we don’t know about the Usyk-Bellew fight is how well Bellew will look after he drains down to 200 lbs to make weight on November 9 for the weigh-in. Bellew hasn’t fought at cruiserweight in the last two years since 2016, and he’s been eating well rather than having to watch his weight.

If Bellew ends up sacrificing muscle rather than fat, then he’s going to likely be weight drained when it comes to the fight. I hate to say it but Bellew won’t have a chance of beating a talent like Usyk if he’s weight drained on November 10. If Bellew is smart, he’ll have been taking off the weight slowly, losing that stubborn flab that he’s carrying around. I mean, Bellew is still essentially a light heavyweight, but he’s put on fat to fill out to fight at cruiserweight. It’s easy to put on muscle for slender type of fighters. He’s going to need to lose enough of the fat for him to safely make the 200 lb limit without draining himself for the Usyk fight, and it’s unclear whether he can do that.

Usyk was willing to fight Bellew at heavyweight. It didn’t matter to him if his four cruiserweight titles were on the line for this fight, since he plans on vacating them anyway so that he can go after a big money fight against IBF/WBA/WBC/WBO heavyweight champion Anthony Joshua. Bellew should have agreed to fight Usyk at heavyweight instead of cruiserweight. Bellew’s promoter Eddie Hearn wished the fight had been made at heavyweight, reason being that he knows how hard it’s going to be for Bellew to take the weight off to make 200 lbs and he doesn’t want him to be fighting on fumes on November 10. Not only will that be bad for Bellew, it’ll also be bad for the boxing fans to see him getting batted around the ring like a baseball by Usyk.

Above all, Hearn wants to put on exciting fights that entertain the boxing public. That might not happen if Bellew is drained, weak and tired from having taken off so much weight to get down to the agreed upon weight of 200 lbs. Believe me; Usyk gains nothing in succesfully defending his cruiserweight titles against a Bellew if he’s weight drained and looking like a shell of his former self. Usyk has already arguably beaten five cruiserweights that are better than Bellew in the last two years since 2016 in beating Krzysztof Glowacki, Michael Hunter, Mairis Briedis, Marco Huck and Murat Gassiev. Even Thabiso Mchunu might be better than Bellew, and Usyk beat him with ease. If Bellew is weight drained, he’s going to be even more vulnerable against a talented cruiserweight like Usyk than he already is.

It won’t even be sporting if Usyk doesn’t have an able-bodied opponent inside the ring with him. Usyk might as well have already moved up to heavyweight to take on the talented fringe contenders in the division to help him get ready for the Joshua fight rather than wasting time fighting a guy that can no longer make the cruiserweight limit without weakening himself.