Ricky Burns vs. Scott Cardle on Usyk-Bellew card on Nov.10 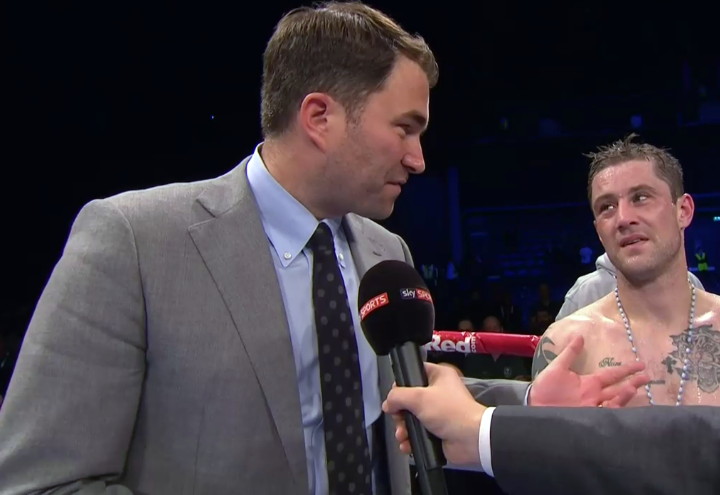 By Scott Gilfoid: Ricky Burns will be facing former British lightweight champion Scott Cardle (23-2-1, 7 KOs) on the undercard of Oleksandr Usyk vs. Tony Bellew next Saturday night on November 10 on Sky Box Office at the Manchester Arena in Manchester, England.

Burns comes into the fight with Cardle having lost two out of his last three fights. Burns has recent losses to Anthony Crolla and Julius Indongo. Burns fought well enough to deserve a draw against Crolla last year in October 2017. The fight took place in Crolla’s hometown of Manchester, so it was an impossible situation for Burns. In Burns’ last fight, he defeated Ivan Njegac by a 4th round stoppage.

This is a big step down for the 35-year-old Burns (42-7-1, 15 KOs) to face a domestic level fighter like 29-year-old Cardle, who was knocked out in the 2nd round by Lewis Ritson on March 24. Cardle was completely out of his league in taking on Ritson (17-1, 11 KOs), and he was wiped out almost immediately. Cardle came back from that loss in beating journeyman Michael Mooney (8-53-2, 3 KOs) by a six round points decision last August. Cardle’s confidence had to be pretty shaken by his loss to Ritson for him to fight a journeyman like Mooney.

Cardle was supposed to be facing Joe Corina, but he pulled out of the fight due to a hand injury.

“There’s some big fights to be made in the lightweight division and a win here in front of such a large PPV audience will put me further in the frame for next year,” said Burns to skysports.com.

There was a time not too long ago that Burns was considered one of the best fighters in the 130 and 15 lb weight classes. Burns was a good fighter during his prime in those weight classes, but he wasn’t able to stay at the top long for long. Burns’ best wins during his prime was against Michael Katsidis, Ramon Martinez, Kevin Mitchell, Paulus Moses and Jose A Gonzalez.

Burns would like a rematch with Crolla at some point. The two of them would be a good fight at this point if they could stage it at a neutral venue. Going back to Manchester again would likely put Burns in the position where he might need a knockout to make sure he gets his hand raised. Crolla fought just once in 2018 in beating Edson Ramirez by a 10 round decision last March.

Cardle has world title hopes, but the fact that he was blown out in just 2 rounds by Ritson, it shows that he just doesn’t belong in the ring with any of the world champions at lightweight. Cardle needs to stay at the domestic level if he knows what’s good for him, owning to the fact that he keeps failing when he faces a halfway decent opponent. First it was Robbie Barrett who schooled Cardle in 2017, and then it was Ritson. One can only imagine what would happen to Cardle if he fought a halfway decent lightweight contender like Teofimo Lopez, Devin Haney, Rances Barthelemy, Ray Beltran, Richard Commey or Yvan Mendy. Those guys would likely make easy work of Cardle. If Cardle wants to fight anyone, he needs to avenge his losses to Ritson and Barrett.

The boxing fans are hoping that the main event between Usyk and Bellew lives up to the billing for the fight. Usyk (15-0, 11 KOs) seems like he’s having fun getting ready for the fight. Usyk, 31, is taking the fight light, as he knows he’s way above the aging 35-year-old Bellew in the talent department. On paper, Bellew is completely over-matched against Usyk.

Bellew’s fans are hoping he can pull off the upset, but the odds are against him in a major way. We’re talking lottery odds. No matter how much bold talk Bellew does, he’s out of his league in this fight. Bellew should really be starting at a lower level at cruiserweight instead of going straight to the top in facing Usyk. It doesn’t matter that Bellew is a former World Boxing Council cruiserweight champion. He didn’t fight anyone good to win the vacant WBC title in 2016, and he didn’t fight one good contender during his three years in the division.

Bellew should have had to earn the Usyk fight by cutting his teeth on fighting Murat Gassiev, Mairis Briedis or Yunier Dorticos. At least if Bellew beat one or more of those guys, the boxing fans would say that he earned the title shot and he wasn’t just getting the fight because he’s promoted by Eddie Hearn, the same promoter that guides the career of Usyk.