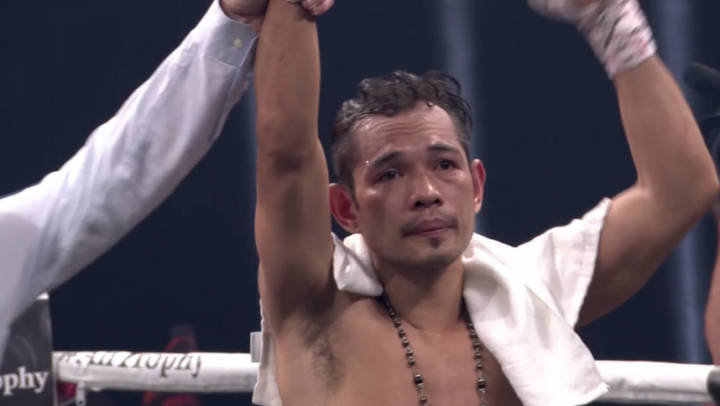 By Jim Dower: Nonito Donaire (39-5, 25 KOs) dethroned previously unbeaten WBA Super World bantamweight champion Ryan Burnett (19-1, 9 KOs) by a 5th round stoppage on Saturday night in the quarterfinal of the World Boxing Super Series 118 tournament at The SSE Hydro in Glasgow, Scotland. Burnett suffered a debilitating back injury during the fourth that resulted to the fight being halted at the start of the 5th.

It’s still unclear what the extent is with Burnett’s back injury that he suffered.

Burnett took a knee in the 4th after throwing a shot. He clutched at his back like he’d pulled a muscle. Burnett’s back continued to give him problems for the remainder of the round after he got back to his feet. It was too easy for Donaire to hit Burnett after he was back on his feet. Donaire landed a crushing right hand at the very end of the round that had Burnett looking stunned. It was obvious from the way the round ended that the fight was either going to be stopped in the corner or during the next round unless Burnett made a miraculous recovery from his back injury.

Boxing News 24 gave Burnett round two but that’s it. Donaire got the better of Burnett in rounds 1, 3 & 4. In the rounds Burnett appeared to lose, he eased off in the last 20 seconds and was worked over by Donaire against the ropes. Burnett took some vicious shots each time he backed up against the ropes. In Burnett’s past fights, he’d done the same thing against his opponents and not had problems, but tonight, he was worked over by Donaire each time he did that.

The fight was officially stopped one second into the 5th. Burnett was taken out of the ring on a stretcher after the fight.

“Age ain’t nothing but a number,” a triumph Donaire said after the fight.

Burnett, 26, suffered a back injury in late in the 4th round after attempting to throw a right hand. Donaire had landed a a shot seconds before the injury to Burnett occurred.

Donaire’s power seemed to take over after the first two rounds, which were close. Donaire started to unload on Burnett beginning in the 3rd round, and he continued to land huge shots in the 4th.

After the injury occurred in the 4th, Burnett got up and backed up to the corners where he took some vicious head shots from Donaire.

First off, I want to acknowledge and thank God and my Archangels for everything they put before me tonight. 🙏 Next I would like to send prayers of healing to Ryan Burnett and thank him for sharing the ring with me. I know he'll heal up and be back in the ring soon! pic.twitter.com/cJoOulLnVW

Burnett landed huge shots in rounds 2 and 3 early on, but it was Donaire who finished both rounds with tremendous shots. In both rounds, Donaire caught Burnett against the ropes and teed off on Burnett with punches that would have knocked out most fighters in the bantamweight division.

The way the fight was going, it didn’t look Burnett was going to be able to last too much longer even if he didn’t suffer a back injury. Donaire was punching too hard, and he had taken over the fight. There was no way that Burnett was going to be able to take the punishment for a full 12 rounds. Burnett’s punches weren’t powerful enough to bother Donaire. While Burnett did land some occasional power shots that got Donaire’s attention, they weren’t coming in on a consistent enough basis for him to have a chance of scoring a stoppage. As hard as Donaire was hitting, Burnett would have needed a knockout, as he couldn’t take getting hit with the shots that the Filipino star was hitting him for long without getting knocked out in a clinical fashion.

This was the first fight of Burnett’s career in which he faced tremendous puncher, and he wasn’t ready for it. Burnett will likely attempt to get a rematch with Donaire at some point, but it would be better for him to take his time. Getting back into the ring with Donaire so soon wouldn’t be the smartest thing for Burnett to do. Right now, Burnett needs to figure out what caused the back injury, and make sure that it doesn’t happen again in the future. There’s no point in Burnett facing Donaire again if his back is going to go out on him after four rounds.

The way that Burnett suddenly suffered a back injury in the 4th was reminiscent of how former WBO super featherweight champion Nicky Cook suffered a back injury in the 1st round in his fight against Ricky Burns on July 16, 2011, resulting in the fight being stopped in the 1st round midway through the round. Cook never fought again. Hopefully this isn’t going to be the case with Burnett. When fighters suffer back problems during their fights, the immediate question is whether this is something that has happened to them during training camp and/or previous fights. If Burnett injured his back while training for the Donaire fight, then it might explain why he hurt it during the bout tonight. It would be a shame if Burnett’s career ends the way Nicky Cook and former middleweight Dmitry Pirog’s careers ended due to back problems.

There wasn’t much for Donaire to get excited about after the fight. He didn’t gloat about the victory, because he knew that winning in that way wasn’t what he wanted.

“As a warrior and as fighter, to go that way wasn’t what I wanted,” Donaire said after the fight. “But a win is a win.”

At Donaire’s age, he wasn’t going to throw the victory back. Donaire moves on with the victory, and he’s now a world champion once again as the new WBA Super World bantamweight champion. A win for Donaire over Zolani Tete will take him to the final of the World Boxing Super Series tournament where he very likely meet up with Naoya Inoue. That would be an interesting fight to see Donaire and Inoue trading power shots. It would be the first time in Inoue’s career where he would be tested by a big puncher. The way that Donaire was punching tonight, he’d have a good chance of stopping Inoue.

Donaire’s next fight will be against WBO bantamweight champion Zolani Tete (28-3, 21 KOs) in the semifinal of the World Boxing Super Series tournament. Tete hits hard, but he’s vulnerable in the chin department. Donaire hits really hard, and he might have too much power for the 30-year-old Tete. Eight years ago, Tete was knocked out by Moruti Mthalane in 2010. Tete has a 12 fight winning streak, but he’s not fought anyone in Donaire’s class in terms of talent. In Tete’s last fight, he squeaked by Mikhail Aloyan in beating him by a 12 round unanimous decision by the scores 114-111, 115-110 and 114-111. You can’t rule out a win for Donaire over Tete. Donaire has faced much better opposition throughout his career, and he’s accomplished much more. Tete is 30, and he’s far behind where Donaire was at when he was the same age.

WBA ‘regular’ bantamweight champion Naoya Inoue figures to meet the winner of the Tete vs. Donaire fight in the final of the WBSS tournament. Inoue will be facing IBF champion Emmanuel Rodriguez in early 2019 in the semifinal of the World Boxing Super Series in early next year.