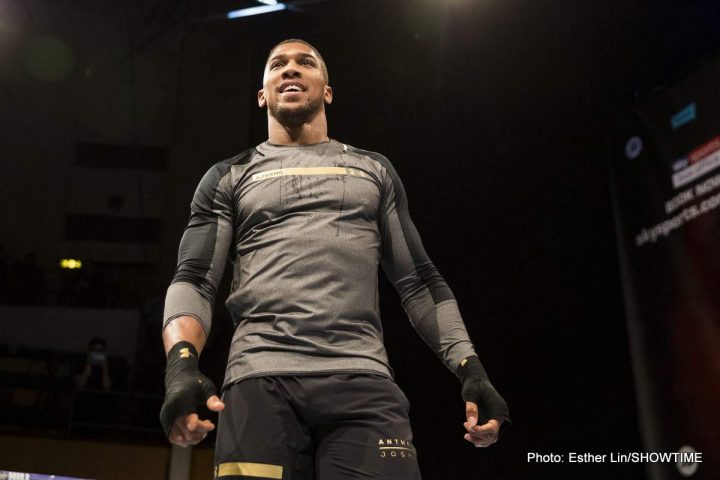 By Tim Royner: Eddie Hearn says there are two possible “wildcard” opponents that he’s looking to possibly match Anthony Joshua against on April 13, with one of them being more a surprise than the other, according to IFL TV.

Undisputed cruiserweight champion Oleksander Usyk would be the biggest shocker for Joshua to fight on the 13th of April. Usyk, 31, has never fought at heavyweight before, and he’s coming off a less than impressive showing against Tony Bellew. The boxing pubic would still like to see Joshua and Usyk fight, but it might not be a fair one due to the 2012 Olympic gold medalist from Ukraine never having fought at heavyweight before.

Hearn would be doing a rush job of matching Usyk against Joshua in his first fight at heavyweight on April 13. Joshua stands a better chance of beating Usyk now than he would after he acclimatizes himself to the heavyweight division in two fights.

There’s a lot of speculation about Hearn’s two wildcard potential opponents for Joshua. Many boxing fans believe that Hearn has Jarrell ‘Big Baby’ Miller or Wladimir Klitschko. It’s unlikely the 42-year-old Klitschko will be the one. He’ll have been out of the ring for two years by the time Joshua fights on April 13. It was bad enough that Wladimir hadn’t fought in two years when he fought Joshua in 2017. Even with that spell of inactivity, Wladimir almost beat Joshua.

A real wildcard for Joshua to fight would be Deontay Wilder. That would be the last opponent that boxing fans would suspect that Hearn would match against Joshua on April 13. Luis Ortiz is another wildcard possibility for Joshua. Hearn has never been eager to match Joshua against Ortiz and Wilder. It’s easy to see why. Joshua could lose to those fighters. He won’t lose to Jarrell Miller, Dillian Whyte, David Allen or Dereck Chisora. Those are heavyweights in Hearn’s stable of Matchroom fighters that he can plug in for Joshua to fight.

It seems that Hearn has got the message from the boxing public about them not being eager to pay to see a retread fight between Joshua (22-0, 21 KOs) and Whyte (24-1, 17 KOs) on April 13 at Wembley Stadium in London, England. The reason for that is obvious. Joshua dominated Whyte in six of the seven rounds of their fight in 2015, and there’s not much suspense about a second fight. If Whyte had been competitive throughout the contest with Joshua three years ago, it would make sense for Hearn to put them back together for a second go. It would look bad in the eyes of the boxing public if Hearn throws Whyte back in with Joshua. That would look like a self-serving move on his part in order to make it a Matchroom Sport in house fight.