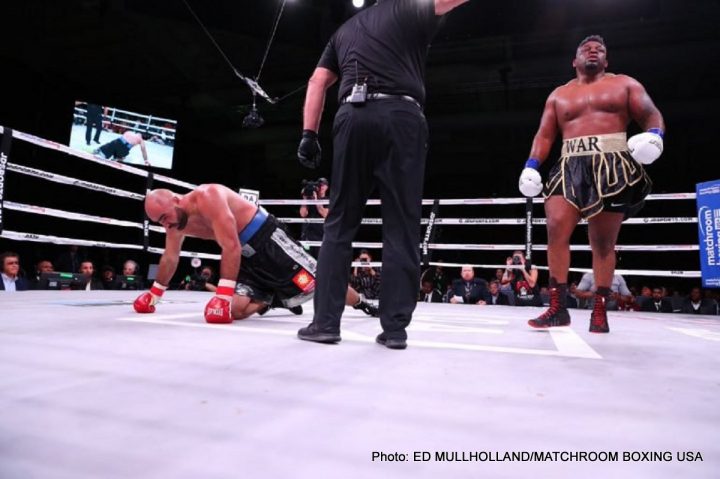 Miller, 30, dropped Dinu in the 4th round with a big right hand to the head. The 6’5″ Dinu got back to his feet, but was knocked down once again. The fight was then stopped by referee Bill Clancy. The time of the stoppage was at 2:45 of round 4.

The win keeps Miller alive for a chance of fighting IBF/WBA/WBO heavyweight champion Anthony Joshua on April 13. Joshua’s promoter Eddie Hearn said this week that Miller and Dillian Whyte both have a chance of fighting Joshua. Hearn was hoping the World Boxing Association would allow tonight’s Miller vs. Dinu fight to be for the vacant WBA ‘regular’ heavyweight title. The WBA rejected that idea. In hindsight, it’s a good thing the WBA title wasn’t on the line tonight, as Dinu looked poor and clearly didn’t belong inside the ring with Miller. The WBA would be better off sanctioning a better fight than that for their ‘regular’ heavyweight title.

Middleweight contender Gabriel Rosado (24-11-1, 14 KOs) fought to controversial 12 round draw against Luis Arias (18-1-1, 9 KOs). The scores were 116-112 for Rosado, 116-112 to Arias and 114-114. Boxing News 24 saw Rosado winning the fight by a 117-111 score. Rosado was getting the better of Arias in most of the rounds, landing the harder shots throughout and hurting him. It was outcome. Rosado has had bad luck lately when it comes to winning decisions. Last year, he lost a questionable decision to Martin Murray in Liverpool, England.

Rios, 32, looked like a world champion in battering Saul Canelo Alvarez’s brother ‘Inocente’ Alvarez in every round of the fight before the match was stopped in the 9th. The fight was halted at 0:38 of round 9 by referee Thomas Taylor. Alvarez was hurt in the 8th round, and he barely was able to survive the round. The referee gave Alvarez a break in allowing it to continue without stopping it. A lo of referees would have stepped in and halted the match due to the punishment Alvarez was taking. Alvarez needs to consider retiring.

There’s a good chance that Rios will fight Josh Kelly (8-0, 6 KOs) next if he wins his fight on December 8 against former WBA welterweight champion David Avanesyan. Kelly’s promoter Eddie Hearn of Matchroom Boxing is said to be interested in having him fight Rios. It’s a good fight for Kelly, who is a defensive fighter, and not a great one for the easy to hit Rios. If Kelly stands in front of Rios and tries to slug the way Alvarez did tonight, then ‘Bam Bam’ will have a chance to win the fight.

It’s too bad tonight’s card failed to have any competitive match-ups.