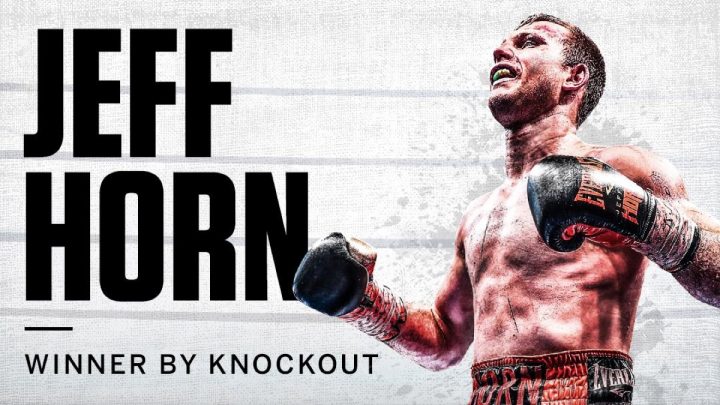 By Chris Williams: Jeff Horn (19-1-1, 13 KOs) looked great in destroying 43-year-old former WBA super middleweight champion Anthony ‘The Man’ Mundine (48-9, 28 KOs) in the 1st round on Friday night in middleweight action in a 12 round scheduled fight at the Suncorp Stadium in Brisbane, Australia. Horn, 30, jumped all over the inactive Mundine the opening seconds of the round, nailing him with hooks, left hands and big right hand blasts to back him up against the ropes. Horn then nailed the older fighter Mundine with a hard left to the head that put him down.

Referee Phil Austin then stepped in and halted the fight. The official time of the stoppage was at 1:36 of round one. The fight was contested at a catchweight of 156.5 lbs. With the win, Horn captured the World Boxing Organization Oriental and vacant WBA Oceania middleweight titles. After the fight, Mundine spoke of wanting to retire from boxing.

It took Jeff Horn less than two minutes to knock out Anthony Mundine in their middleweight bout. pic.twitter.com/1fxBwio7Kd

This was supposed to have been a competitive fight. Although the 30-year-old Horn was a lot younger than the 43-year-old Mundine, he was the smaller guy and facing a fighter that was known for having excellent punching power. Mundine obviously is no longer in the prime of his career, but he still possesses a lot of punching power despite being an older fighter. However, the difference in hand and foot speed was the key to Horn winning the fight so effortlessly tonight. Horn was a lot quicker than Mundine, and once he started nailing him with shots, it was clear that the fight was not going to last long.

In his prime, Mundine would have been a big problem with the 5’9” Horn, but that was a long time ago. Mundine hasn’t been at his best since 2008. He’s arguably 10 years past his prime, and Horn caught him at the right time to beat him. The loss of hand speed was the most noticible thing about Mundine’s performance tonight. He was so much slower than once was. While some fighters still look good in their early 40s, Mundine isn’t one of them. He’s lost too much of his game for him to be competitive even against vulnerable welterweights like Horn. When a fighter like Mundine can’t compete with a struggling welterweight like Horn, it’s time to reevaluate what he wants to do with his career.

The loss for Mundine was his 9th of his career, and his 6th in the last eight years. Mundine is now losing to guys that he likely would have wiped out in his prime. Besides Mundine’s loss tonight to Horn, he’s suffered recent defeats at the hands of Danny Green, Charles Hatley and Joshua Clottey. Mundine was also beaten by Daniel Geale in 2013. Geale was a good fighter back then, but he caught at the right time in his career with him 38-years-old and no longer at his peak.

With the win, the victory opens up a lot of questions about where Horn can go from here. He’s a natural welterweight, but the way he looked in losing to former unified light welterweight champion Terence Crawford by a 9th round knockout last June, it suggests that it might not be a good idea for him to move back down to 147. Horn is huge for welterweight anyway, and he probably should be fighting at least in the 154 lb weight class if not 160. Horn looked monstrously heavy last July in defeating Manny Pacquiao by a controversial 12 round unanimous decision in Brisbane, Australia. Horn in a lot of boxing fans at the Suncorp Stadium tonight in Brisbane. With all the ticket sales and PPV money that is available for a fight against Horn, it might be tempting for one of the non-Top Rank welterweights like Errol Spence Jr., Danny Garcia, Shawn Porter, Keith Thurman or Amir Khan to fight him in Brisbane. However, it’s still unlikely to happen due to the politics of boxing. Horn is promoted by Top Rank, and those other fighters are with Al Haymon at Premier Boxing Champions. They’re on different networks. Horn is with ESPN, and those guys are with Showtime or FOX.

It’s believed that Horn’s last fight at full strength at welterweight was his match against Pacquiao last year. Since that fight, Horn has looked drained after making the weight for his last two fights at 147 against Terence Crawford and Gary Corcoran. It might be a good time for Horn to move up to at least 154 to fight in a weight class that is more designed for his actual frame. It might have been good idea for Horn to take advantage of his size to melt down to 147 to beat up smaller guys than himself for the first five years of his pro career, but at 30-years-old, he’s clearly not able to make the weight at welterweight and be at full strength like he was from 2013 to 2017. Horn should up to junior middleweight to take on the top 154 lb fighters

These are the likely options for Horn if he stays at welterweight:

Luis Collazo – after he faces Crawford

Most of those guys are Top Rank stable fighters that they could potentially stick in the ring with Horn. other than Crawford and Kavaliauskas, there’s nothing interesting there for Horn to fight. It would be a tough sale for Top Rank to try and match Horn and Crawford back up against each other. It obviously wouldn’t be a good idea for them to make that fight, but it was arguably a poor idea to match Crawford against Collazo and Benavidez. If they’re willing to have Crawford fight those guys, then a rematch against Horn wouldn’t be surprising. If Top Rank could put together fights for Horn against Al Haymon’s fighters, then he would have a lot of great options in fights against Khan, Shawn Porter, Danny Garcia, Keith Thurman and Errol Spence. That’s not likely to happen. For that reason, it would be better for Horn to move up to 154 or 160 and look for fights in those two divisions against the best guys Top Rank can find for him.

Jermell Charlo – Not likely due to him being managed by Haymon

There are obviously a lot more options for Horn at 154 and 160 than if he stays at 147, and finds himself unable to get fights against the popular welterweights other than Crawford. The question is can Horn fight at junior middleweight and middleweight against the top guys? He showed that he can beat a big puncher from the 168 lb weight division in Mundine tonight. If Horn can do that against a guy as big as Mundine, then perhaps he’s got the talent to compete against the best from 154 to 168. Horn certainly has the frame to fight in all three of those weight classes. He’s a huge fighter, and capable of adding a lot of weight to fight at middleweight and super middleweight. Horn is already a junior middleweight in size. He doesn’t need to do anything to fight at 154. He’s already as big as anyone in the 154 lb weight class in terms of weight.

« Manny Pacquiao is back on the job

Nathan Gorman: Tyson Fury Will Make Him Miss And Make Him Pay »