Canelo wants to return to MSG after Fielding fight 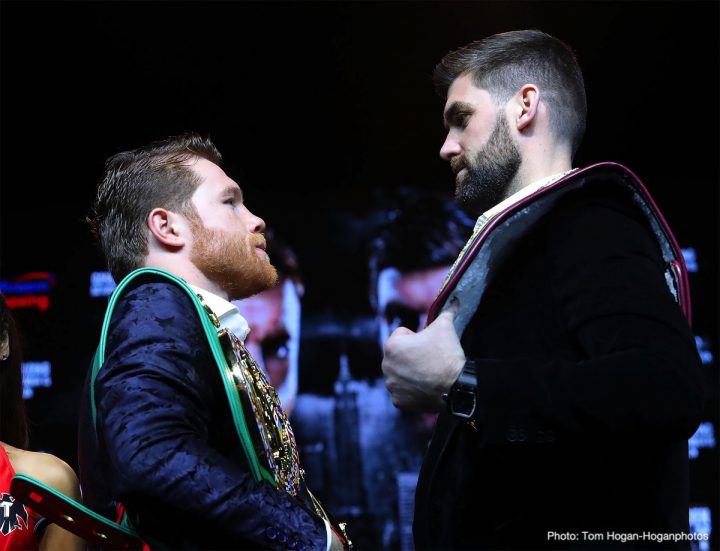 By Jeff Aranow: Saul Canelo Alvarez says he’s interested in returning to Madison Square Garden in New York to continue to fight at that venue in the future after he challenges WBA ‘regular’ super middleweight champion Rocky Fielding there on December 15.

It’s anyone’s guess what has made Canelo want to come back to New York, as he obviously has a good thing going with him fighting almost exclusively in Las Vegas, Nevada. Is it guilt on Canelo’s part to want to fight outside of Las Vegas in a place like New York? With many people thinking Canelo is given gift decisions when fighting in Vegas, him deciding to fight in New York could be seen as a way of distancing himself from continual criticism from boxing fans.

If Canelo changes his favorite fighting city from Las Vegas to New York, boxing fans can’t say he’s being given favorable treatment by the judges in Las Vegas. Of course, if the New York judges start giving Canelo controversial decision wins in that city, the criticism of the Golden Boy star will begin again from fans with them perceiving he’s being pampered by the judges.

Canelo (50-1-2, 34 KOs) is perceived by a lot of fans as being almost unbeatable when fighting in Las Vegas, perhaps dodging as many as three losses by fighting in that city. It’s believed by many boxing fans that Canelo can’t be beat by decision when fighting in Vegas. His two fights against Gennady Golovkin and his 2014 match against Erislandy Lara all took place in Las Vegas, and it’s thought by many that he deserved defeats in those three fights.

A victory for Canelo over WBA World super middleweight champion Rocky Fielding (27-1, 15 KOs) on December 15 will make him a three-division world champion. Canelo has won world titles at 154 and 160. A victory over the 31-year-old Fielding gives the Mexican star his third division world title.

Canelo fighting in New York would be taking him away from the areas where his boxing fans are situated. Most of Canelo’s fan support is centralized in three states in the United States, in California, Nevada and Texas. If Canelo can build a large fan base in New York, he would be repeating what Gennady Golovkin did in becoming a big name in the East Coast. But for Canelo to become a star in New York, he’s going to need to stop being involved in controversial decisions that favor him, and he’ll need to fight better opposition than Fielding.

This a major step down for Canelo from his last fight against GGG. It’s fine if this is a one off for Canelo, but it’s not okay if he’s going to continue to take easy opposition. It’s already being talked about by a lot of boxing fans that Canelo’s fight next May on Cinco de Mayo will be against David Lemieux. That’ll be a disappointing choice if that’s who Alvarez faces. Lemieux isn’t considered to be a top five contender at middleweight Lemieux is being put in a prime position to get the fight against Canelo in early 2019 by fighting on the Canelo-Fielding card on December 15 against Tureano Johnson.

It would mean a lot more if Canelo was fighting a good super middleweight for his fight on December 15. It’s a nice move that Canelo is fighting in a different city for only the second time in the last three years since 2015. Canelo would receive a lot more appreciation from fans if he was fighting Callum Smith, David Benavidez, Gilberto Ramirez, George Groves or Jose Uzcategui. Those guys would be risky fights for Canelo, and he might lose to them. Fielding is a fight that is seen as a sure thing win for Canelo, It’s far less certain that Canelo would beat Smith, Benavidez, Ramirez, Uzcategui, Groves or even Chris Eubank Jr. Those are very tough outs for anyone in the sport, especially someone moving up in weight from the middleweight division.

To have a positive experience in New York, Canelo is going to need to make sure he can deal with the height, weight and punching power of the 6’1″ Fielding. Canelo’s punches are probably not going to be able to do much against a fighter like Fielding, who is used to being hit harder by bigger guys in the super middleweight division. Moreover, Fielding will likely rehydrate into the mid-180s, which will give him a slight weight advantage over Canelo.

It’s a rare thing for Canelo to be the smaller fighter in terms of weight nowadays. He packs on the weight when he rehydrates. If Canelo bulks up to the 180s for the Fielding fight, it could even things out a little. You can’t rule out Canelo coming into the fight with Fielding looking like a light heavyweight. Boxing fans saw the incredible transformation Canelo made with his physique before his first fight against Golovkin in 2017. It was like seeing the transformation Sylvester Stallone made with his own body when he went from Rocky 2 to Rocky 3. Canelo was not only bigger for the GGG fight, but he was cut up like a body builder. It’s hard for fighters to get defined without losing tons of mass/weight, but Canelo was able to pull it off somehow.

If Canelo can do the same thing against Fielding, he might be at the same weight as him on the night in the 180s. It’ll be difficult for Canelo to go back down to 160 though if he bulks up into the 180s. He might find himself in the same boat Roy Jones Jr. found himself in after he bulked up to heavyweight to fight John Ruiz in 2003, and then dropped back down to light heavyweight, where he was knocked out by Antonio Tarver in the 2nd round in 2004. Jones was never the same fighter after that. He would later be knocked out by Glen Johnson, Danny Green, Denis Lebedev and Enzo Maccarinelli. When fighters start jumping up in down in different weight classes, they sometimes mess with their body chemistry and wind up weight drained and not the same fighter they once were.

“I’m taking a risk by entering into a comfort zone of a champion and his weight, that’s a risk, and that risk makes it even,” Canelo said. “It makes it interesting [fighting a larger fighter]. I know that Rocky is used to receiving punches from another weight class and I know that he’s taller. It’s not an easy fight, and I’m preparing for the best Rocky Fielding and to make sure that there are no surprises,” Canelo said.

Fielding will be the slower fighter of the two, but if he uses his height and reach, he could in theory box Canelo from the outside all night long without getting hit a lot. Canelo is only 5’8″, and he’s going to look out of place inside the ring on December 15. The fight won’t be in Las Vegas. Golovkin wasn’t given a decision over Canelo when he jabbed him all night long from the safety of the outside, but Fielding might have different luck. He’s fighting Canelo in New York, and perhaps the judges see things differently in the East Coast compared to in Las Vegas.