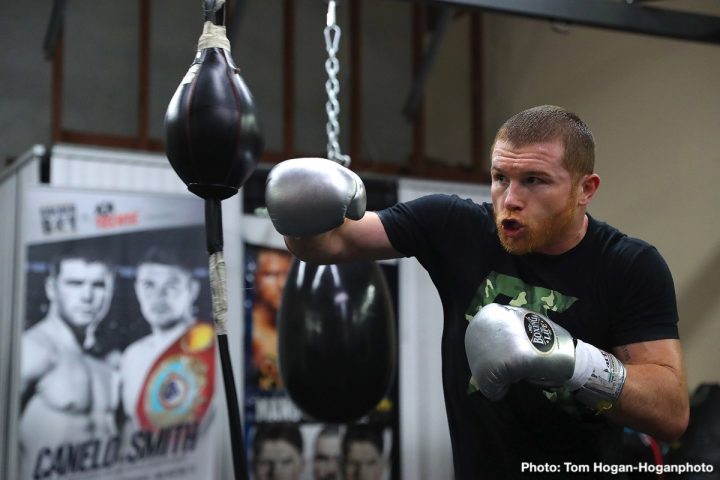 By Logan Garcia: Saul Canelo Alvarez says he won’t fight Floyd Mayweather Jr. below 160 lbs if a chance comes up for him to face the American superstar a second time. Canelo (50-1-2, 34 KOs) is now firmly established as a middleweight at 28-years-old, and it would prove too hard for him to drop back down to 154 lbs or lower to try and give Mayweather a weight handicap.

It would be a miracle if Mayeather did come back to challenge Canelo for his World Boxing Council middleweight title. Mayweather doesn’t need to do that. He can make big money fighting MMA guys with no boxing skills. There are enough casual fans out there willing to pay big money to see Mayweather’s fights for it to continue to be worth it for him to make those novelty matches. Mayweather doesn’t need to face a boxer when there’s an unlimited number of MMA fighters that want to face him.

Canelo doubts that Mayweather will bother fighting him at age 41. Canelo doesn’t think Mayweather wants any part of a second fight with him now that he’s in his prime, and has a lot of experience under his belt from fights against Gennady Golovkin [x 2], Miguel Cotto, James Kirkland, Erislandy Lara, Amir Khan, Liam Smith, Julio Cesar Chavez Jr., and Alfredo Angulo.

“I can’t go down further than 160 pounds. If that fight were to take place, it would have to be at 160 pounds,” Canelo said.

Even if Canelo wanted to drop down below 160 to fight Mayweather, he couldn’t do it. Canelo is too old now to fight below 160. His body isn’t going to let him fight below 160. If anything, Canelo should think of moving up to 168 on a permanent basis after the fight with WBA ‘regular’ super middleweight champion Rocky Fielding (27-1, 15 KOs) on December 15 at Madison Square Garden in New York. At 168, Canelo could be involved in big fights against Callum Smith, David Benavidez, Gilberto ‘Zurdo’ Ramirez, Jose Uzcategui, Caleb Plant, George Groves and Chris Eubank Jr. There would be at least seven big fights for Canelo if he stays at super middleweight. If Canelo drops back down to 160, he has important fights against Gennady Golovkin, Daniel Jacobs, Rob Brant, Jermall Charlo and Demetrius Andrade. That’s only five fights.

Five years ago, Canelo lost to Mayweather by a 12 round majority decision in 2013. Canelo was 21 at the time, and not in his prime. He made the mistake of agreeing to fight Mayweather at a 152 lb catchweight, and it was hard for him to make the weight. Canelo was so drained at the weigh-in for the fight that he needed to sit down. In hindsight, it was a mistake for Canelo to agree to the weight.

Mayweather would likely press for Canelo for a weight reduction below 160 if the two were to negotiate a fight. Mayweather hasn’t said anything about ever wanting a second fight against Canelo, but it’s likely that he would push to have the weight well below 160 lbs.

“I’m a more complete fighter now. I would be much more competitive,” Canelo said of a second fight against Mayweather. “I have a lot more experience. I have improved a lot, so it would be different.”

It wouldn’t be beneficial for Canelo to fight Mayweather right now in large part due to his advanced age. Fighting someone as old as Mayweather takes away any credit that Canelo would receive in beating him. Mayweather being retired since 2016 further increases the likihood that Canelo wouldn’t be given any credit from the boxing world by beating an older guy like Mayweather. Although Mayweather’s fight last year in August 2017 against Conor McGregor was sanctioned as a professional fight by the Nevada State Athletic Communion, it wasn’t a good enough opponent for it to be considered a true fight in the eyes of a lot of boxing fans. Mayweather picked out a guy with no skills in boxing and the Nevada Commission sanctioned the fight.

Mayweather used his jab from the outside to pick Canelo off all night long, and he didn’t bother throwing power shots that would have left him open to counter shots. Mayweather did throw an occasional right hand and left hook, but he went into the full defensive mode after getting clipped by a hard shot from Canelo in round 9. It was a boring fight. Mayweather had to make it boring, because he didn’t have the size or the punching power to beat Canelo in a conventional fight. The Two of the judges were fine with Mayweather’s safety first style of fighting.

It would be very different. After Mayweather, we’ve faced very good fighters,” Canelo said. “We fought Miguel Cotto, GGG twice. It will be different, and he’s a more complete fighter now with more experience. If this fight were to happen again, we would defeat him, no problem.”

It might not be a super easy fight for Canelo to defeat Mayweather if he’s had a full training camp under his belt, but it would still be a fight that Alvarez would be a huge favorite. Mayweather’s legs looked gone in his last fight a years ago against McGregor, and his hand speed wasn’t the same. It’s not surprising though. When you’re as rich as Mayweather is, it’s not easy to stay sharp. Mayweather has been traveling around the world, enjoying himself for the last several years, and no longer taking boxing seriously. You’ve got to give Mayweather a lot of credit for spotting McGregor to fight last year inside the boxing ring. Mayweather didn’t even need to fight a good fighter for him to get a tremendous payday. McGregor was good enough to attract interest from the casual boxing fans, who mistakenly thought that it was going to be an exciting fight where each of them had a chance to win. In reality, only Mayweather had a chance of winning that fight against McGregor.