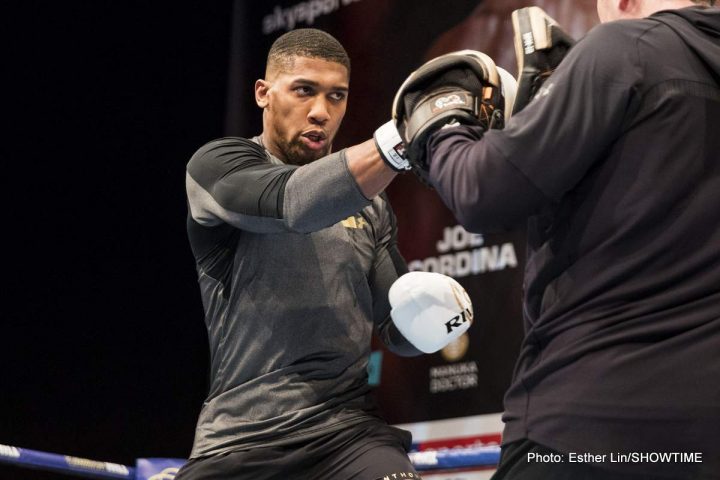 By Allan Fox: Oleksander Usyk is in the target sights of IBF/WBA/WBO heavyweight champion Anthony Joshua following his win over Tony Bellew last Saturday night in defending his cruiserweight titles. Joshua sees Usyk (16-0, 12 KOs) as an interesting fight for the near future.

Usyk hasn’t moved up yet to heavyweight, but he’s expected to do that for his next fight after defending his IBF, WBA, WBC & WBO titles for the final time. Usyk has Joshua as the guy that he wants more than anything. There’s also WBC champion Deontay Wilder that holds a title, but he’s not as important to Usyk as Joshua. That’s the fight that Usyk wants for obvious reasons. Joshua has more titles than Wilder, he’s viewed as the best in the division, and there’s more money for Usyk in fighting him.

It sounds like Joshua is whistling a different tune now that Usyk has beaten fellow Matchroom Sport fighter Bellew. Before the fight, Joshua had spoken about how he wanted Bellew to beat Usyk. But now that Bellew has come up empty, Joshua has quickly changed his tune and is talking about being interested in fighting him.

Hearn notes that boxing great Evander Holyfield was able to move up from cruiserweight to heavyweight and find great success. Hearn thinks that it was harder for Holyfield to succeed because he needed to do it on toughness rather than skills. Hearn might not be aware of how skilled Holyfield was. He wasn’t just a tough fighter with power. Holyfield also had fine boxing skills. He beat the likes of Mike Tyson twice, George Foreman, Larry Holmes, Buster Douglas, Michael Dokes, Pinklon Thomas, Bert Cooper, Ray Mercer, Riddick Bowe, Alex Stewart, John Ruiz, Bobby Czyz and Michael Moorer. It was only the huge heavyweights like Lennox Lewis and Bowe that gave Holyfield problems while he was in his prime. It wasn’t until Holyfeld was past his prime that he started losing to the average sized heavyweights. Usyk is fortunate that the current heavyweight scene isn’t permeated by the same talents that existed when Holyfield was fighting.

“The challenge for Usyk is the size. It’s going to be very difficult for anybody to out-skill him, but [Evander] Holyfield did it, but he did it actually with toughness, which is even harder than to do it with skill,” Hearn said.

Bellew caused a stir last weekend when he proclaimed Usyk as the best cruiserweight of all time after losing to him by a 8th round knockout, but the knowledgeable boxing fans believe Holyfield is still the best of all time.

Hearn says Usyk will take 2 fights at heavyweight before facing Joshua. There are a number of heavyweights that Hearn will be looking to match Usyk up against before he puts him in with Joshua. Hearn isn’t going to just give Usyk a title shot against Joshua. Usyk is going to need to earn the fight against Joshua. Usyk could come apart when he steps it up against the much bigger fighters than himself in the heavyweight division. Rehydrated, Usyk looked to be 210 lbs at the most last Saturday night against Bellew. For Usyk to have a chance of beating the larger heavyweights like Dillian Whyte, Jarrell ‘Big Baby’ Miller and Joseph Parker, he’s going to need to add some weight and develop his punching power. A loss for Usyk against one of those heavyweights will ruin his shot at facing Joshua. If Usyk can’t beat those heavyweights, then he needs to think about moving back down to cruiserweight. It would be pointless for Usyk to fight Joshua if he can’t beat the contenders in the division.