WBC on board with Canelo facing Fielding for 3rd division title 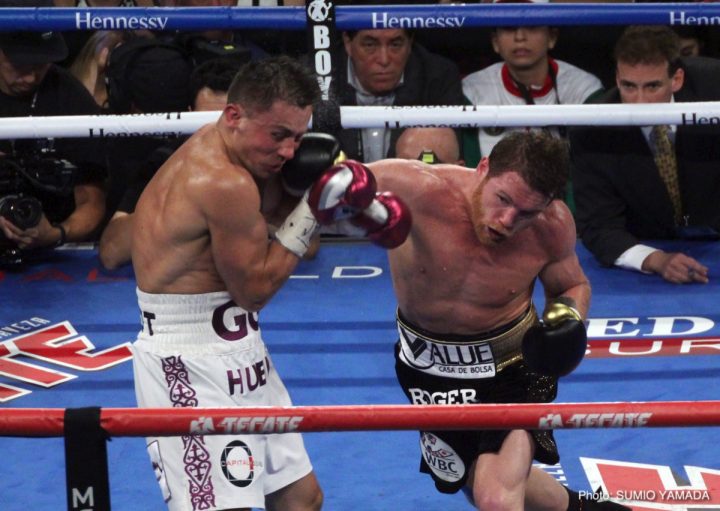 The perception from a lot of boxing fans is Canelo is ducking his WBC mandatory Jermall Charlo and a third fight with Gennady Golovkin, who is seen as having beaten him twice in a row in Las Vegas, although judges failed to give the Kazakhstan fighter the wins.

”It’s an opportunity that comes, it would be a spectacular close of the year and the WBC is in full support because we have agreed with it,” World Boxing Council president Mauricio Sulaiman said to ESPN Deportes. ”I am happy because Canelo is at home (with the WBC). We agree on this fight at 168 pounds. He will represent the CMB.”

In their meeting last week at the 56th annual convention, the WBC granted Canelo permission to take a voluntary defense in his next fight in December against the opponent of his choice. It was believed at the time that Canelo would make that defense against David Lemieux on December 15.

To the surprise of many, Canelo decided to move up to 168 to challenge WBA super middleweight champion Fielding. This means that the contenders in the WBC’s top 15 are seeing their careers being put on hold potentially with Canelo, the WBC’s 160 lb champion, moving up to 168 to take what amounts to be a legacy type of fight to add another division title to his resume. Canelo will probably vacate the WBA ‘regular’ super middleweight title if he wins the title. He’s not expected to keep the title. This is clearly a fight just to give Canelo a chance to add to his resume without him staying at the weight. If Canelo kept the belt, he would need to fight WBA Super World super middleweight champion Callum Smith sooner or later, and that would be a difficult match-up for him. Smith is 6’3” with huge power in either hand. He looks like a light heavyweight after he rehydrates, and he’s dangerous. To show you how dangerous Smith is, he knocked Fielding in the 1st round in 2015. Smith tore through Fielding in treating him like a speed bump.

The 31-year-old Fielding is promoted by Eddie Hearn of Matchroom Sport/DAZN. It’s a win-win situation for Hearn to have Fielding fight a popular star like Canelo, because it’s a fight that could wind up DAZN if he’s lucky. Canelo’s promoters at Golden Boy still need to decide which platform they’ll show the Canelo vs. Fielding fight. In the UK, the fight will be broadcast on Sky Sports. In the U.S, Canelo-Fielding has the possibility of being broadcast on one of these networks/platforms: DAZN, HBO, Showtime or ESPN. Canelo can make Hearn a happy camper if he agrees to have his fight with Fielding shown on DAZN. Hearn would like nothing better than to sign a long-term agreement with Canelo to have his fights streamed on DAZN. However, it’s not likely that Hearn could afford to pay Canelo the money he would need to pay him to get him to sign with his Matchroom Boxing USA/DAZN promotional company. It would require that Hearn dig into the big money he’s getting from DAZN for him to have a chance of signing him.

“With great excitement, I announce my next fight, next December 15 at the MSG in New York, taking on another big challenge in my career and representing the WBC as the 160-pound champion,” Canelo said on his social network. “Now I’ll fight for the world title for 168 pounds. vs Rocky Fielding, current WBA champion.”

Up until now, only one fighter that was born in Mexico has won a world title at super middleweight. Gilberto ‘Zurdo’ Ramirez captured the WBO 168-pound title in beating Arthur Abraham in 2016. Canelo, 28, will be the second fighter from Mexico to win a world title at super middleweight if he gets past Fielding on December 15. It obviously won’t be nearly as interesting if Canelo took on one of the lions in the super middleweight division like Callum Smith, Jose Uzcategui or David Benavidez, but for some reason he and his promoters at Golden Boy Promotions chose Fielding instead of them. Perhaps it’s just a coincidence that Fielding is seen as the weakest of the champions at 168, but I don’t think matters to Canelo and Golden Boy. Canelo-Fielding is more about a resume-padding fight by giving him a title in his third weight class. Fighters do this kind of thing all the time nowadays. Manny Pacquiao won world titles in eight divisions by often fighting guys that weren’t viewed as the best.

Alvarez will be returning from his second controversial decision against middleweight champion Gennady golovkin last September in Las Vegas, Nevada. The controversial 12 round decision win for Canelo over GGG has polarized the boxing world with many fans furious about the Golden Boy appearing to get a decision win in a fight that he should have lost. Golovkin wanted a third fight to avenge his loss, but Golden Boy and Canelo aren’t interested in facing him at this time. They want Fielding in December. At the same time, the WBC organization has ordered Golovkin to face interim WBC middleweight champion Jermall Charlo in order to take care of Canelo’s WBC mandatory challenger, who at this time is Jermall. The WBC wants Golovkin and Charlo to square off to pick out the next mandatory for Canelo. However, there’s no guarantee that Canelo will defend against the winner of the Golovkin vs. Charlo fight, so it could be a pointless endeavor for the two to face each other. Canelo’s track record on defending against his mandatory challengers isn’t a great one, as he vacated his WBC middleweight title in 2016 after the WBC ordered him to fight Golovkin.