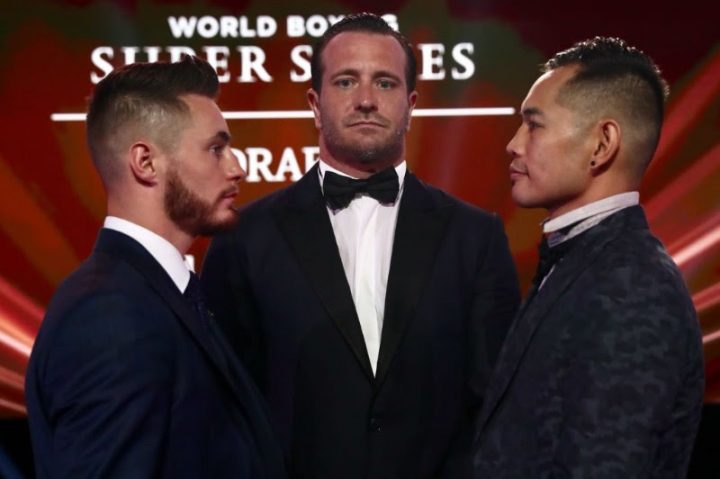 By Mike Smith: Ryan Burnett (19-0, 9 KOs) and former four division world champion Nonito Donaire (38-5, 24 KOs) will be fighting this Saturday night in the World Boxing Super Series bantamweight tournament on the undercard of the Josh Taylor vs. Ryan Martin card at The SSE Hydro in Glasgow, Scotland.

Donaire was a terror when he was fighting at bantamweight. It was a weight class that really highlighted his punching power. What we don’t know is whether Burnett is one of those fighters who is fighting out of his natural weight class. In other words, if Burnett someone that rehyrates to close to 140 lbs after he makes the 118 lb weight limit, then Donaire might have problems with his size, because he doesn’t rehydrate that much for his fights.

Burnett, 26, will be defending his World Boxing Association Super World Bantamweight title against the 35-year-old Donaire, who will be turning 36 on November 16. The vacant World Boxing Council Diamond Bantamweight strap will be on the line for the fight. The WBC Diamond strap is of less importance for the two fighters. What’s important is for one of them to win the fight so they can move forward into the semifinals of the World Boxing Super Series.

This is a fight that has gotten less attention than it otherwise would if it wasn’t taking place on the undercard of the Taylor-Martin fight. The focus from the boxing public is the Taylor vs. Martin fight more so than the Burnett vs. Donaire fight, which is just as important.

Burnett vs. Donaire fight boils down to these areas:

– Speed: Even at 35, Donaire is still the faster of the two by far. Burnett isn’t a speed guy. He’s more of a boxer with moderate power.

– Power: Donaire is the bigger puncher of the two. Burnett is a finesse type of fighter, who scores his knockouts by landing an accumulation of shots over the course of his bouts.

– Experience: Donaire by far is the more experienced of the two fighters. Burnett will need to stick around the game for a long, long time to get the kind of experience that Donaire possesses. Even then, Burnett will need to succeed for many years for him to fight the type of guys that Donaire has fought. Donaire has fought the likes of Vic Darchinyan, Guillermo Rigondeaux, Omar Narvaez, Wilfredo Vazquez Jr., Jorge Arce, Toshiaki Nishioka, Simpiwe Vetyeka, Nicholas Walters, Cesar Juarez, Jessie Magdaleno, Carl Frampton, Fernando Montiel, Volodymyr Sydorenko, Hernan Marquez, Manuel Vargas, Rafael Concepcion, Raul Martinez, Moruti Mthalane and Luis Maldonado. In contrast, the only names that Burnett has on his resume are Lee Haskins and Zhanat Zhakiyanov. The experience advantage that Donaire has is so huge that it’s not even fair. Donaire is so far ahead of Burnett in the experience area that it’s hard to see the Irish fighter winning the fight aside from him being the younger fighter fighting in his part of the world.

– Hometown advantage: Burnett will have an advantage in the fight due to him being from the UK. Although Burnett isn’t from Scotland, the boxing fans will likely be favoring him rather than Donaire, who was born in the Philippine and lives in the United States.

– Size: This area goes to the 5’7 1/2″ Donaire by a long shot over the 5’4″ Burnett. Donaire is the much taller fighter of the two, and he has a two inch reach advantage to go with his taller height. Donaire’s superior size could result in Burnett choosing to hold all night long. Hopefully, that doesn’t happen for the sake of the boxing fans tht watch the fight. Burnett has to show that he can do more than grapple for 12 rounds.

– Ring IQ: Donaire has proven repeatedly in the past that he’s one of the smartest fighters in boxing. Burnett hasn’t shown the same intelligence. Burnett did zero adapting in his fight against Zhanat Zhakiyanov last year. Burnett came out holding and spent the entire fight with his arms wrapped around the Russian fighter, not letting him throw punches.

Donaire is fighting for the first time at 118 n seven years since 2011. No one knows whether Donaire will be able to make the weight without draining himself. He moved up from 122 to 126 five years ago after suffering a one-sided 12 round unanimous decision loss to Guillermo Rigondeaux in 2013. In hindsight, it was a the wrong move for Donaire, because he hasn’t performed as well at featherweight.

Burnett won the WBA Super World bantamweight title last year in November 2017 in beating champion Zhanat Zhakiyanov by a 12 round unanimous decision in Belfast, Northern Ireland. The fight was ugly to watch, owning to the fact that Burnett used a strategy of grappling with the much harder punching Zhakiyanov for three minutes of each round. Only periodically, Burnett would throw a few fast shots and then dive forward and wrestle Zhakiyanov to keep him from throwing anything back. It disappointing to see Burnett resort to holding Zhakiyanov, considering that he at least could have tried to prove that he could beat him in real way without using a spoiling tactic of wrestling for the full three minutes of each round. For the boxing fans that remembered seeing how much grappling Andre Ward did in his first fight against Sergey Kovalev in 2016, Burnett did far more wrestling against Zhakiyanov, and he got away with it without being penalized or disqualified. The referee gave Burnett a huge break in not penalizing him for his spoiling tactics. You’d hate to see Burnett fall back into using the same tactic when he gets inside the ring with Donaire on Saturday, but you can’t rule it out. This is another fighter that Burnett will be fighting that has much more power than he possesses.

Before Burnett’s win over Zhakiyanov, he defeated Lee Haskins last year to win the IB bantamweight title in June 2017. That was a far better performance by Burnett than the clinch-filled fight we saw from him against Zhakiyanov. Rather than holding onto the IBF title, Burnett vacated the title after the International Boxing Federation ordered him to face Emmanuel Rodriguez. You can understand completely why Burnett would want to vacate the title in order to avoid a very complicated fight against Rodriguez that he might have lost. Burnett would have had to come up with a different game plan than just holding all night to beat Rodriguez, because he knows how to fight guys that try and spoil their way to victories. Burnett kept the WBA title, which was the easier one to retain because there wasn’t a risky fight being ordered for him like there was for his IBF title. In Burnett’s only defense of his WBA title thus far, he defeated fringe level contender Yonfrez Parejo (21-3-1, 10 KOs) by a 12 round unanimous decision earlier this year on March 31 in a one-sided contest on the undercard of Anthony Joshua vs. Joseph Parker in Cardiff, Wales.

There’s no question that Burnett’ win over Haskins was a nice performance by him. Burnett showed excellent power and boxing skills last year. What’s odd is why Burnett chose to spoil for 12 rounds against Zhakiyanov, a fighter that he at least should have tried to bet by standing and trading with the Russian fighter. But then again, it’s quite possible that Burnett and his management realized that he lacked the punching power to stand in front of Zhakiyanov for 12 rounds.