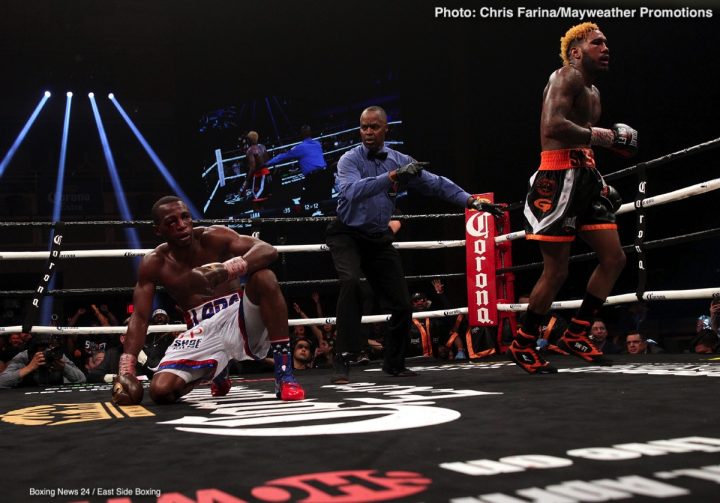 By Dan Ambrose: It’s official that Jarrett Hurd (22-0, 15 KOs) will be returning to the ring on December 1 to face Jason Welborn (24-6,7 KOs) on the undercard of Deontay wilder vs. Tyson fury on Showtime pay-per-view at the Staples Center in Los Angles, California.

A victory for Hurd could put him in with World Boxing Council junior middleweight champion Jermell Charlo (31-0, 15 KOs) in a unification fight, as long as he wins his next fight on December 22 against Tony Harrison at the Barclays Center in Brooklyn, New York. Charlo and Hurd are expected to duel in the first half of 2019 in a unification fight on Showtime. Charlo and Hurd have been trading barbs back and forth for a long time. It’ll be good for them to finally face each other.

Hurd, 28, is taking a low level fight against Welborn due to him coming off left shoulder surgery. Hurd injured his shoulder in beating WBA Super World junior middleweight champion Erislandy ‘The American Dream’ Lara last April in a unification fight.

Hurd’s management are bringing him back slowly from surgery by having him fight 32-year-old Welborn, who holds the British middleweight title following his back to back victories over Tommy Langford. Welborn is a good domestic level, but unfortunately for him, he’s facing what could be the best fighter in the 154 lb division in Hurd. Welborn is obviously many levels below Hurd in the talent department, but it’s for a good cause. Hurd’s management don’t want to match him tough in his first fight back from surgery. To boot, it’s important that the card have more UK fighters due to Tyson Fury competing in the main event against WBC heavyweight champion Deontay Wilder. The card will be shown in both the U.S and UK, so it’s a good idea for Hurd to face a British fighter like Welborn, even if it’s a mismatch of major proportions.

Welborn is coming into the fight with a nice winning streak of five fights since his loss to Craig Cunningham two years ago in 2016. It was a surprise at the time that Welborn lost to Cunningham, as a lot of boxing fans expected him to win that fight at the time. Cunningham was going through a hot streak in his career at the time, beating Welborn and Anthony Ogogo in back to back fights. Cunningham’s career has since cooled off with him losing his last two fights to Lukas Ndafoluma and Jack Culcay.

“I will be fighting Jarrett Hurd for the IBF, WBA,IBO world titles on the Fury-Wilder undercard on December 1 live from staples Center on Showtime Boxing PPV Hurd-Welborn#👊 TIME To SHINE #2018 My year #believe#TW😇

Welborn isn’t doing any trash talking or making any bold predictions about his fight against Hurd. It’s just as well, because he’s not likely to win the fight.

In looking at Hurd’s resume, one would need to go far into the early part of his career to find an opponent in the class of Welborn. Hurd has been facing quality opposition in the last two years, beating Erislandy Lara, Austin Trout, Tony Harrison, Oscar Molina, Frank Galarza and Ionut ‘Jo Jo’ Dan. Hurd has been getting better with each fight. Two years ago, Hurd wasn’t viewed as a fighter on his way to winning a world title. However, things have changed with Hurd’s wins over Harrison, Trout and Lara. Hurd is now seen as the top fighter in the light middleweight division by many boxing fans.