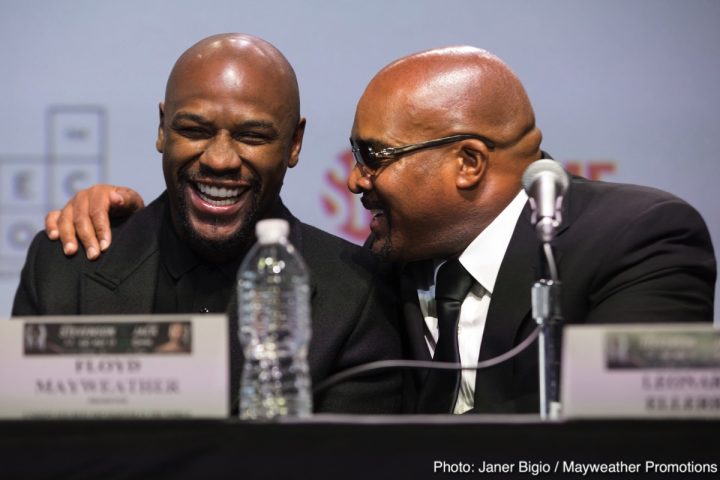 Mayweather beat Paacquiao by a 12 round unanimous decision three years ago in September 2015. The scores were 116-112, 116-112, and 118-110. Unknowing to the public, Pacquiao came into the fight with a right shoulder injury that hindered his effectiveness. Manny’s shoulder problem has since been taken care of with surgery, and he’s come back and looked good in winning three out of his last four fights. The only loss on Pacquiao’s resume since his Mayweather fight was a controversial 12 round unanimous decision to Jeff Horn last yearn in the Australian’s hometown of Brisbane.

Mayweather says he wants the rematch with Pacquiao, and you have to believe him. Mayweather was doubted by boxing fans when he said he was interested in fighting UFC star Conor McGregor, and he turned around and fought him in August 2017. The fight pulled in 4.4 million buys and was hugely successful. Mayweather-McGregor didn’t break the PPV record of 4.6 million buys that Mayweather-Pacquiao pulled in from 2015, but it was close enough to that number to make both fighters a lot of money.

”This year would be a challenge,” Espinoza said in trying to get the Mayweather vs. Pacquiao 2 fight put together for a PPV bout. ”Not that we haven’t pulled off stuff in a short time like we did with Mayweather and [Conor] McGregor, but I do think we’ll be seeing the rematch between Mayweather and Pacquiao in a fairly short order,” Espinoza said.

It would be a really bad idea for the Mayweather-Pacquiao2 rematch to take place in 2018, since it would need to compete with all the big fights that are already scheduled to take place in December. Deontay Wilder vs. Tyson Fury is one of the important fights that will be taking place in December. There are a lot of big fights taking place in the UK that will take away interest from a Mayweather vs. Pacquiao second fight. It would be better for Mayweather and Pacquiao to face each other in the first half of 2019 when there’s nothing going up against it to take away the PPV buys.

”I understand that people doubted it with the way it was announced in a viral video, but I think that was just Floyd taking advantage of the opportunity and marketing it in the way he markets things,” Espinoza said.

Mayweather made an announcement recently on video that he would be facing Pacquiao in a rematch, but then he disappeared and didn’t continue to talk about the fight. That’s what made a lot of boxing fans think he was just pulling their leg about wanting a second fight with Manny. For Mayweather to show that he’s serious about wanting a rematch with Pacquiao, he’s going to need to talk about it more in the media.

”2019 sounds perfect,” Espinoza said about the timeline for when Mayweather vs. Pacquiao 2 will likely be taking place. ”after I get a little bit of sleep after this event, we’ll go at Mayweather-Pacquiao 2 right away.”

Mayweather will have been out of action for two years when/if he faces Pacquiao in 2019. That’s obviously not a good thing for Mayweather to be out of the ring for that long, but his boxing fans will still pay to see him. It will obviously hurt the PPV sales that Mayweather hasn’t fought in two years, but enough fans will pay to see it for the fight to bring in a lot of PPV sales that will satisfy both fighters. Mayweather says he wants a 9-figure payday for the Pacquiao rematch. It’s likely that Pacquiao will be looking for a similar sum. Whether there will be enough revenue for both fighters to make the kind of money they want to make from a Mayweather-Pacquiao2 fight is the big question. Well have to see if the fight will do the huge numbers that we’ve seen from Mayweather’s fights in the past.

Espinoza wants to assure the Showtime subscribers that they will not be getting out of the boxing business the way HBO did recently by announcing they will no longer be televising the sport after 2018. Espinoza say boxing brings Showtime a lot of value, and they remain committed to the sport.

”Absolutely,” Espinoza said when asked if Showtime is still committed to boxing. ”One thing I quibble a little bit with HBO’s statement is the suggestion that boxing didn’t provide value. I don’t know about their subscribers, but from our standpoint, we’re not going anywhere. Boxing brings tremendous value to our network. It drives our business, and we’re going to be in the sport for a long time to come,” Espinoza said in confirming that Showtime doesn’t plan on leaving the boxing business like HBO recently did.

This is good news for Showtime’s subscribers that they don’t plan on discontinuing their televising of boxing, because a lot of fans tune in to Showtime to watch the sport.