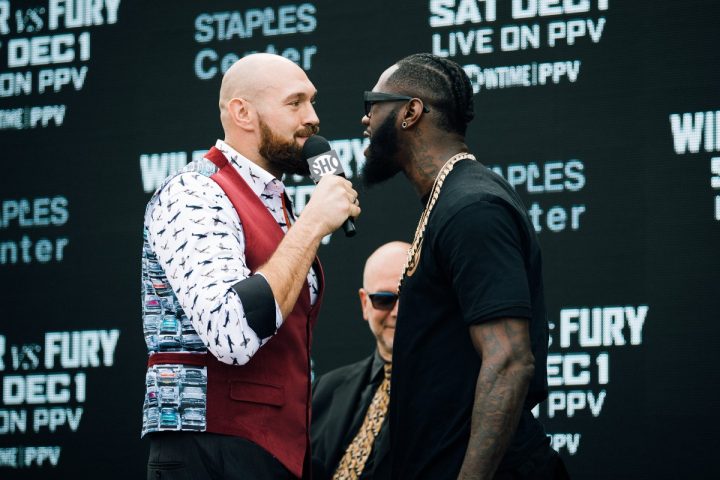 By Tim Royner: Deontay Wilder says he could make between $59 million to $100 million for his mega-fight against Tyson Fury on December 1 on Showtime pay-per-view at the Staples Center in Los Angeles, California.

The difference in the cost of the PPV in the U.S compared to the UK is one reason why Wilder feels that he’ll make more money fighting the 30-year-old Fury than he will when/if he ever faces IBF/WBA/WBO heavyweight champion Anthony Joshua, who wants his first fight against Deontay to take place in England. Wilder says there’s a cap on the money fighters can make in the UK.

If Wilder makes $100 million for the Fury fight, then that would be a considerable bump up in pay from the $1 million to $2 million that he’s been making for his fights. Of course, Wilder hasn’t been fighting on PPV, and he’s also not been fighting big names during his career. We don’t know how much money Wilder would have been making in the past if he’d been fighting popular guys like Fury and Joshua. It’s taken this long for Wilder to get one of the British heavyweights to face him. Perhaps the Wilder vs. Fury fight will bring in $100 million like Deontay is talking about. It’s still too early to predict the amount of money the fight will pull in.

”Most definitely,” Wilder said to TMZ when asked if his fight with Tyson Fury will bring him more money than a fight against Joshua in England. ”We don’t have no cap on the revenue. Whatever it makes, it goes up. Our pay-per-view here, we can go $59 [million] up to $100 [million]. Their pay-per-view sells for no more than $20 bucks, period, flat-line,” Wilder said.

Wilder (40-0, 39 KOs) could make more money fighting Fury from U.S PPV sales, because he’s likely getting a better percentage cut of the revenue against him than he will fighting Joshua. Moreover, Fury is doing a great job of attracting interest in the Wilder-Fury fight with his theatrics. Joshua tends to show no emotion at his press conferences, and he often says very little. The promotional side of Joshua’s fights are largely done by his promote Eddie Hearn with him giving all the interesting quotes. Joshua might as well be a cardboard prop that is put in the conference halls during the news meetings with the press. It’s Hearn and Joshua’s opponents that are frequently doing all the hard work in promoting his fights with interesting sound bites.

“At this point in time, we’re good. He’s a coward,” Wilder said about Anthony Joshua not wanting to fight him. ”We already know what he is. He don’t want to fight.”

Joshua wants to fight Wilder, but the fight hasn’t been made because of the tough negotiating tactics by Hearn. He hasn’t wanted to give Wilder a percentage split of the revenue for the fight with Joshua. The $15 million flat fee offer Hearn tried to get Wilder to agree to recently was embarrassingly low compared to what the fight can pull in. If Wilder had signed for the fight with that figure, Joshua would have walked away with as much as $85 million compared to Wilder’s $15 million.

“This is the biggest fight in the world,” Wilder said about his December 1 fight against Tyson Fury. ”This fight right here is going to bring a lot of revenue. If me and Joshua have to fight in England, then we’re [Wilder-Fury] are going to do way better numbers than we’re going to do in England for the simple fact that England has a cap on their money. It’s a certain amount of limit [of money] you can make and that’s it. In America, there’s no limit. People always think the money is in Europe, but it’s not. The mega-money is here because of the cap on it [in Europe],” Wilder said.


« Terence Crawford: Pacquiao is NOT a champion in my eyes