Loeffler sifting through offers for GGG 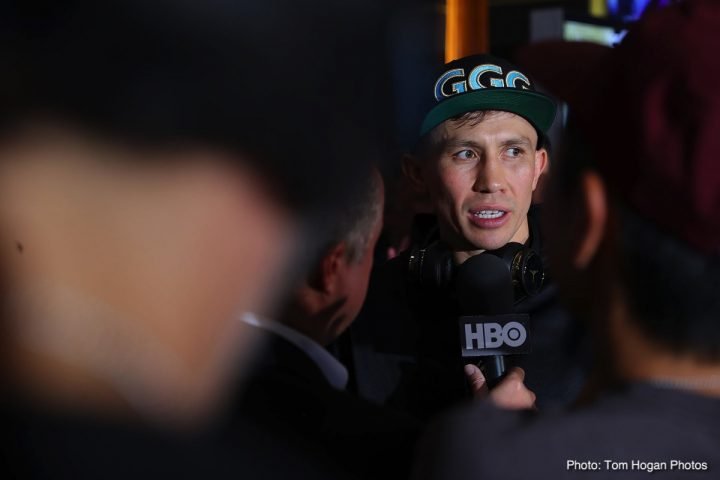 He’s not saying which network platform is likely to sign the 36-year-old Golovkin 38-1-1, 34 KO), but he feels confident that he’ll end up in a nice spot. According to Matchroom Boxing USA promoter Eddie Hearn, Triple G has no other choice but to sign with DAZN if he wants to get the trilogy fight against Canelo Alvarez that he so badly craves.

“We’re receiving a lot of offers, very significant offers. So I am sifting through them to make sure we get the best deal possible for Gennady,” Loeffler said to ESPN.com.

Loeffler is talking with DAZN, ESPN and Showtime. Loeffler is going to make sure that Golovkin signs with the best platform that pays and gives him opportuntieis for big fights. Hearn believes that DAZN will soon have the top middleweights signed with them, which means that if Golovkin wants to fight Canelo, Daniel Jacobs, Demetrius Andrade, Jermall Charlo, and David Lemieux. Charlo still hasn’t signed with DAZN, but Hearn believes he soon will so that he can make money and have access to fighting the other guys. Out of the list of fighters that are currently with DAZN, only Canelo is someone that GGG would likely have any interest in fighting. He already beat Daniel Jacobs last year, so there’s no point in Golovkin fighting him again. Jacobs was on the run most of the fight, and made it boring to watch. Jacobs also skipped the IBF mandated secondary weigh-in on the day of the fight so that he could rehydrate. Andrade isn’t a big name, so there’s no allure for Golovkin to fight him. Jermall is an unknown, and not worth fighting. Although the World Boxing Council ordered Golokin to face Charlo in order to take care of Alvarez’s mandatory challenger, he’s not agreed to that.

“There’s a different platform that is not involved in boxing right now that has expressed interest in Gennady,” Loeffler said. “So we’re talking to all of those platforms. We want to make the right deal for Gennady. We want to make sure Gennady gets a deal representative of the value that he brings to a [broadcast] partner.”

The way that Loeffler is talking, he doesn’t sound concerned about Golovkin needing to be with DAZN for him to get a fight against Canelo. The fight is going to happen whether Golovkin is with DAZN or not, because it’s too big for it not to happen. Like I said, the only middleweight that the DAZN has that is worth Golovkin fighting is Canelo. Hearn’s fighters Jacobs and Andrade lack the popularity for it to be worth it for Golovkin or Canelo to face them. I don’t think Golovkin cares about titles any longer at this point. There’s more money to be made for Golovkin targeting fighters like Ryota Murata and Canelo than wasting time fighting the likes of Andrade, Charlo, Billy Joe Saunders and Jacobs.


« Mayweather wants Khabib and McGregor in 2019