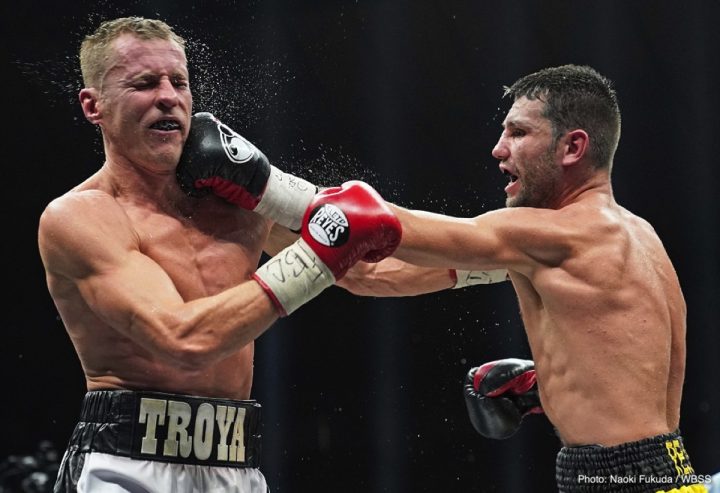 By Jeff Aranow: Kiryl Relikh (23-2, 19 KOs) retained his WBA World light welterweight title in beating #1 WBA Eduard Troyanovsky (27-2, 24 KOs) by a 12 round unanimous decision on Sunday night in their quarterfinal fight in the World Boxing Super Series 140 pound tournament at the Arena in Yokohama, Japan.

Relikh, 28, defeated former IBF light welterweight champion Troyanovsky by the scores 115-113, 115-113 and 115-113. Boxing News 24 saw Relikh winning by a 116-112 score. Relikh did enough to get the ‘W’, but he failed to distinguish himself in fighting cautiously and at a slow pace, which kept the 38-year-old Troyanovsky in the fight.

Troyanovsky came on a little in the championship rounds to make the fight closer than it should have been, but it was still a clear victory for Relikh. Troyanovsky looked scared in the first eight rounds, as if he was just trying to survive the 12 round fight without getting knocked out by the heavy-handed Relikh. If that was the idea, it worked for Troyanovsky, as he didn’t get hit with any of Relikh’s big shots while he was still fresh in the early rounds. When Troyanovsky finally did start to go on the attack in the 8th, Relikh was no longer punching with the same kind of power he had earlier. However, Troyanovsky appeared to be hopelessly behind by that point. Obviously the judges had their own ideas, as all three of them saw it as a close fight for some reason.

The blueprint was already there for Relikh to follow in how to beat the Russian Troyanovsky if he’d watched his previous 1st round knockout loss to Julius Indongo in 2016. Indongo went after Troyanovsky with power shots in the opening round of that fight, and immediately took him out. Relikh tried a different approach in boxing Troyanovsky, and fighting at a slower pace and not going after him the way that he needed to for him to knock him out.

Relikh is going to need to be a lot better for him to get past the other WBSS contestants in Regis Prograis and Josh Taylor. Those are the talents that are expected to meet up in the final of the tournament. Relikh has the punching power to beat them, but he needs to look a lot better for him to beat guys in that class than what we saw tonight.

Undefeated WBC light flyweight champion Ken Shiro (14-0, 8 KOs) defeated challenger Milan Melindo (37-4, 13 KOs) by a 7th round knockout in the World Boxing Super Series light flyweight tournament. The fight was stopped due to a cut that Melindo had suffered in the 6th round. The official time of the stoppage was at 2:47 of round 7.

The defense for Shiro, 26, was his fourth. He looked good in beating a game but limited 30-year-old Melindo, who comes from the Philippines.