By Tim Royner: Callum ‘The One’ Johnson (17-1, 12 KOs) says he would like a second shot at facing IBF light heavyweight champion Artur Beterbiev (13-0, 13 KOs) after losing to him by a 4th round knockout last Saturday night at the Wintrust Arena in Chicago, Illinois. Johnson hurt the seemingly invincible Beterbiev in the 2nd round with a left hook that put him on the canvas briefly.

Johnson, 33, says he “froze” in the moment and chose to let him escape because he was overthinking and not just going on cruise control the way he needed to for him to finish the hurt Beterbiev in the 2nd round. Beterbiev wasn’t going to wait around for Johnson to gain enough confidence to beat him, so he started boxing him from the 3rd round.

Beterbiev knocked Johnson out in the 4th round upon catching him with a shot when he made the mistake of charging straight into his left hand. This was the first time Johnson had stepped up against an elite level fighter in his eight-year pro career.

“I did well. I had my moment,” Callum Johnson said to IFL TV about his fight against Beterbiev. ”I just came up short against a better guy last night. I think with a little more activity, I could have done better and maybe got him out of there when I had the chance. I froze when I done him in the 2nd round. I sort of froze when I didn’t follow up with it and I didn’t throw anything, and then he got back into the fight. He caught me in the 4th and that was it,” Johnson said.

It’s a fight that Johnson wasn’t fully prepared for mentally. He hadn’t been matched against any of the top contenders or champions before during his career. Whether that was his fault or his promoter Eddie Hearn’s fault. He wasn’t put in against anyone that could gt him ready for what he had to deal with in Beterbiev. Frank Buglioni was not any kind of a good warm-up opponent to get Johnson prepared for a fighter in the class of Beterbiev.

“In the not too distant future, I’d like to get in there with him again,” Johnson said of wanting a rematch with Beterbiev. “I’d like to get couple of more fights in, stay active, and maybe win the British and European titles, and then get another fight with him. I do believe on my day if I perform the best I can perform, I can beat him. I think I proved that even last night, but I don’t think I performed at my best. I think it was one of those fighters where whoever landed first [would win]. He landed first, I landed second, and then it was all done. I’m proud of myself. He got his shots off and was the better man on the night. I’ll fight anybody in the world as long as it makes sense financially. Nobody wanted to fight him. Nobody has ever taken him in deep waters like that. It was a four-round slugfest, and four rounds where no one knew who was going to win. I’ve got the physical ability. I’ve got the skills. I’ve got the strength, and the power. I think last night was the final hurdle needed to plot in my brain that I can go with the big boys. I have the ability to beat those boys. Mentally last night did me a world of good, even in defeat. It hasn’t dented my confidence at all. If anything, it’s lifted my confidence. I’m determined to get the world title and get back in as soon as possible,” Johnson said.

As long as Johnson isn’t dropped too far in the International Boxing Federation’s top 15 ranking, he might get another title shot against Beterbiev in the future. However, it’s more likely than not that he won’t unless his promoter Hearn matches him against someone ranked highly in the division and he’s able to beat them. A win for Johnson over the likes of Marcus Browne, Badou Jack, Sergey Kovalev, Joe Smith Jr. or Sullivan Barrera.

”I thought it was a little bit borderline,” Johnson said about being knocked down in the 1st round by Beterbiev after having his head caught in the ropes. ”My head was through the ropes. The ref shouted, ‘Break,’ and the next thing I’m on my ass. I was coming out of the ropes and he put one on me, but what can you do? The refs in there to ref the fight, and he scored it a knockdown. I’ve got the ability and the power to be with anybody in the world to beat anyone in the world and I think I proved that a little bit. I didn’t finish it off, but on a different night, I could have done a bit. I think the occasion got to me. I think I was a little bit stiff in my performance,” Johnson said.

Johnson failed to protect himself when got entangled in the ropes in the 1st round. When Johnson freed himself from the ropes, Beterbiev was waiting for him and he landed a big shot that dropped him. Ideally, the referee would step in and do something to keep Beterbiev off of him, but he didn’t do it, so there wasn’t much that Johnson could do. That’s not why Johnson lost the fight.

“When I did put him over, I sort of froze,” Johnson said. “I just froze. I was sort of overthinking everything. It’s a learning experience. This is the first time I’ve been at this kind of level. Against a fighter I was up against. I was up against the most feared fighter in my division. I didn’t fear him, but I think the occasion got to me. I’ll fight anybody in the world. When I’m inside the ropes, I don’t care who it is, I’m going to try and take their heads off. It’s that simple. I tried to take his head off, and nearly did, but it didn’t quite workout for me, and he wound up taking my head off. I felt like I was pushing him back and bullying him. I felt stronger than him. He can obviously punch very hard. It didn’t feel like he was punching super hard, but he obviously must have done because when he landed, he put me over. I felt like I was pushing him back. I was belting him a lot, and he just caught me on the back at the top of the temple, and I went over and he dazed me. Who knows? In a round or two, I might have put him over. I was proud of myself. I’ve enhanced my career. I know my own ability, and I know I didn’t perform the best I can. I had my moments and almost got him out of there, and he took his moment and got me out of there,” Johnson said.

Beterbiev had enough power to knock Johnson out, and that’s the important thing. Johnson is going to need to improve his defense skills in the future if he wants to beat Beterbiev in the rematch. If they fight each other right now, Beterbiev wins once again because he’ll box him from the outside and not take any chances in getting nailed by one of his big shots in the first two rounds. 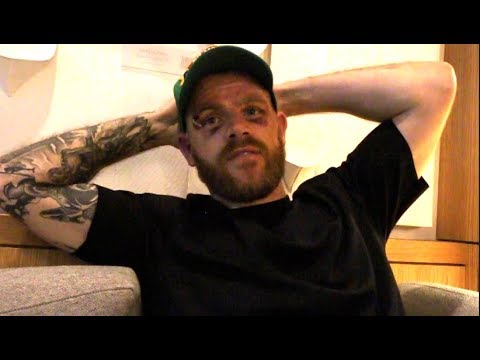