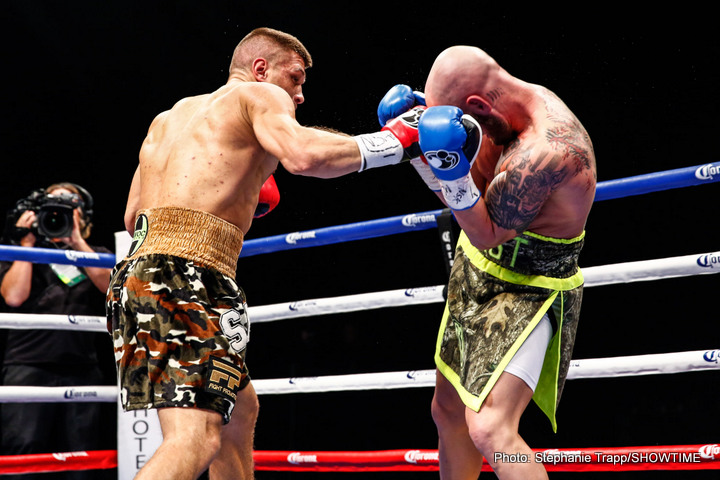 By Allan Fox: Sergiy Derevyanchenko (12-0, 10 KOs) stands in the way of Daniel Jacobs (34-2, 29 KOs) from capturing the vacant IBF middleweight title, and moving forward to face Saul Canelo Alvarez (50-1-2, 34 KOs) in May of next year. A loss for Jacobs to Derevyanchenko would be a huge setback for the New Yorker, who can’t afford to get beaten if he wants to face Alvarez in 2019.

Daniel Jacobs is being positioned by his promoter Eddie Hearn to face Saul Canelo Canelo Alvarez for May 2019. Alvarez has been quiet on the subject of his May opponent, but his promoter Oscar De La Hoya has mentioned Jacobs, Callum Smith and Jermall Charlo as possibilities for Canelo.

The Lou DiBella-promoted Derevyanchenko has nothing that stands in the way of him getting the Canelo fight if he beats Jacobs. The only question is would Golden Boy want to take a chance of another tough fighter working Canelo over. Canelo has arguably been beaten twice by Gennady Golovkin, but was seen as being saved by the Nevada judges in his favorite fighting city of Las Vegas. If Derevyanchenko does a job on Canelo too, it would be a big blow to his career. This is why you have to ask the question of whether Derevyanchenko has a realistic chance of getting the Canelo fight if he defeats Jacobs on Saturday night. Whatever the case, Derevyanchenko will still be the new International Boxing Federation middleweight champion if he beats Jacobs, and that can’t be taken away from him. If Golden Boy chooses not to let Derevyanchenko get a chance at fighting Canelo, it won’t be the end of the world for the 2008 Ukrainian Olympian. He can defend the IBF title against all comers, and eventually get a big fight if he holds onto the title long enough for that to happen.

Derevyanchenko, 32, isn’t being mentioned as having a chance for the Canelo fight if he beats Jacobs, but you never know. A win for Derevyanchenko over Jacobs will certainly increase his chances of getting a fight against the Mexican star. As of now, Derevyanchenko has virtually no shot at fighting Canelo next year, but that could change if he demolishes Jacobs on Saturday night on HBO. An impressive win for Derevyanchenko will get the attention of Golden Boy Promotions, who need a fighter that they can match against their flagship star Canelo in early 2019.

Jacobs will soon be one of Hearn’s DAZN fighter once he finishes his final fight with HBO this Saturday night against the unbeaten Ukrainian talent Derevyanchenko. Jacobs stands to gain a big, big payday fighting Canelo in May if he can get to that fight in one piece without suffering another defeat. Gennady Golovkin and Dmitry Pirog have beaten Jacobs in the past to stop him from moving on to bigger things with his career. Could it be that Derevyanchenko will be the next guy that sends Jacobs down to defeat? It won’t be the end of Jacobs’ career if he loses to Derevyanchenko on Saturday night. His promoter Hearn will be able to help him back up by setting him up with some mismatches against soft opposition to get him back to his winning ways, but it might take him awhile before he’s under consideration for another fight against Canelo Alvarez. Those type of fights don’t come around too often, and you can’t afford to blow the chances by getting beaten.

Canelo has a fight to get out of the way on December 15 against WBA World super middleweight champion Rocky Fielding (27-1, 15 KOs) at Madison Square Garden in New York. The fight is largely seen as a walk in the part for Canelo. It’s a forgone conclusion that Canelo beats Fielding and then moves forward to his fight in May 2019. Jacobs and his promoter Hearn want the Canelo fight in May, but they need to get Derevyanchenko out of the way before they can punch their ticket for the Alvarez fight, and it’s not going to be easy. Derevyanchenko has looked sensational in his last four fights, beating Tureano Johnson, Dashon Johnson, Kemahl Russell and Sam Soliman.

Beating Jacobs won’t be an easy thing for Derevyanchenko, and he’s well aware of that after having sparred with him many times. Jacobs slugged with his last opponent Maciej Sulecki for 12 rounds in beating him by a wide 12 round unanimous decision last April in New York. Bitten by criticism from boxing fans that he ran from Golovkin for most of their fight last year, Jacobs came out slugging against the light-hitting Sulecki. Jacobs was trying to KO Sulecki with every punch, and this resulted in the fight being an exciting contest with a lot of two-way action. In the end, the fight appeared to be decided by a 12th round knockdown for Jacobs. However, Jacobs was fighting an opponent without any punching power to speak of, so he didn’t need to worry about getting hurt like he’d been in his losses to Pirog and Golovkin. Derevyanchenko is a different story, however, because he has heavy hands and is capable of knocking Jacobs out. Derevyanchenko’s punching power is arguably better than Dmitry Pirog, and he was able to knock Jacobs out in the 5th round in 2010. If Derevyanchenko is able to connect with his punches against a stationary Jacobs, there’s a good chance that he’s going to send him down to his third career defeat. That’s why there’s a good chance that Jacobs will be on his bike in this fight, boxing from the outside and not taking chances unless he feels confident that he’s not going to get hit with anything big in return. Derevyanchenko has likely planned for a situation where Jacobs will be circling the ring constantly, fighting defensively most of the time and not trying to trade at all. Derevyanchenko will need to have quick feet for him to cut off the ring on Jacobs to make him fight because he’s going to do whatever he can to try and avoid getting forced into a dog fight.

It’s going to be interesting to see what Golden Boy and Canelo does if Derevyanchenko comes out victorious in beating Jacobs in their fight on HBO Boxing on Saturday. Will Canelo fight Derevyanchenko in May or does he decide that he doesn’t want any of that hard work?