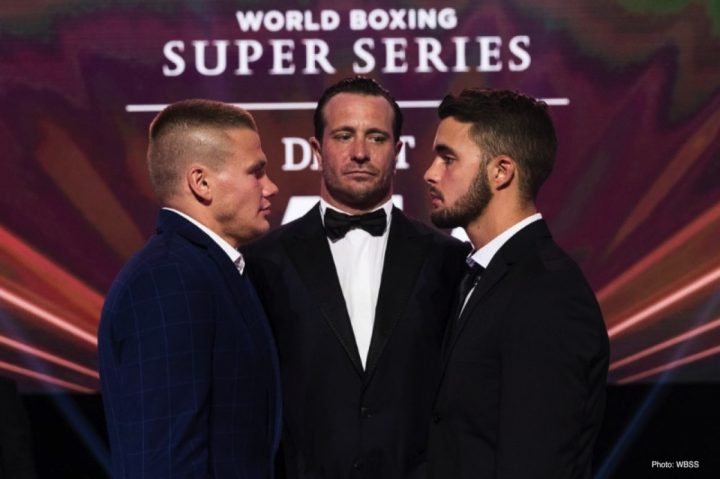 By Ian Aldous: This Saturday night, the World Boxing Super Series continues its momentum with more super-lightweight quarter-final action. Anthony ‘Can You Dig It’ Yigit (21-0-1) and Ivan Baranchyk (18-0) battle for the vacant IBF 140lbs world championship, live on DAZN. Former 2012 Olympian, Yigit, represented Sweden at the games and has gone on to produce a stellar professional career thus far with his biggest fight less than a week away. Last week, Yigit took some time to talk with me over the phone about his career and impending challenge.

IA: First of all, it’s the opportunity of a lifetime: a world championship fight in the World Boxing Super Series. Tell me how you found out about it?

AY: Actually, it dates back to the first season of the World Boxing Super Series, when my countryman, Erik Skoglund, was fighting in it. I was so excited for him to fight in it and when I spoke to my promoter, Mr Sauerland, he told me that they were trying to make a lightweight WBSS for the next season and I said that I was quite interested to join. He said that I had good chance of doing it, but afterwards it turned out to be super-lightweights and that was even better for me because that’s the weight class that I’m already highly-ranked in. When I spoke to my promoter, he told me that I would probably get a spot for it. I kind of knew (I was in), but up until it was all said and done and written on paper – nothing was 100% sure. Once we put our name on the contracts – that’s when I could relax and focus on the fights that were going to come.

IA: After your last fight with Joe Hughes over here in the UK, you spoke about dropping in weight, is that right?

AY: That was my thoughts up until they said that the WBSS was going to be at super-lightweight and you don’t want to pass up on an opportunity to fight in this tournament or for the world title.

IA: The man standing in your way is Ivan Baranchyk. Have you seen many of his fights and how hard of a test do you expect him to be?

AY: I’ve seen, I think, three or four of his fights and I think it depends on how I box on the night. I think it can be a really hard test or it can be a really easy test, it depends on how I use my wits in the fight because he is a tough opponent and if you go to war with him – he’s going to stick it to you, you know? If I box cleverly, which I know I can, I’m a fast fighter as well, I think that I can make it quite a one-sided fight.

IA: You’ve defended the European title twice now, do you feel like this is perfect timing for you to advance to world level opposition?

AY: Yes, definitely. Once you get the European title and defend it twice – and I also got named by the EBU as the champion of the year – I feel like there’s nothing more for me to pursue on a European level. The only thing standing in my way is the world title, that’s where we want to get. I just think that it all came so naturally and it all fell into place. So, yeah, I do believe that this is the best way to go.

IA: You’ve been to the UK twice to win and defend the European belt, have those big wins helped prepare you for fighting away from home in the U.S on Saturday night?

AY: I’ve always been an away fighter. I’ve fought Germans in Germany, I’ve fought Danes in Denmark and Englishmen in England. Me fighting abroad on enemy turf isn’t anything new to me. I’m here in the States, I’ve been here two weeks training here in (the) New Orleans boxing club and they’re all very friendly. There is one more guy that’s going to fight on the show and I feel we’re part of their team now and that feels good, you know? I do believe I’ll get some support here, but I’m used to it (being the away fighter) anyway and I’m just coming here to box. At the end of the day, it’s just me and Baranchyk in the ring. It doesn’t matter who’s supporting or not.

IA: I was going to ask how have you found it in New Orleans so far, but you’ve pretty much answered that already.! It sounds like you’re enjoying it?

AY: I have, they’ve been so friendly. Everyone’s been so nice to me. The neighbourhood is kind of rough, but the people here are so kind-hearted. The boxing gym is actually quite fresh – everything is new in there. They opened it in 2015, so it’s quite new. Everything is good. The people there are so hungry, they’re good fighters. I just feel like I’m among good people and I feel like this will be the best place for me to prepare for this fight.

IA: For those in the U.S who might not have seen you fight before, how would you describe yourself as a fighter and your fighting style?

AY: I think I would describe myself as quite explosive. (My) fighting style is all-round. I’ve got good footwork and I can stand and fight, I can move around. I have some nice angles. One of the good things about me is when you watch one of my fights on youtube, you can never be sure that’s the way I’m going to fight (next time), because I always fight differently depending on what opponent I get. I’m an all-round fighter, but I rely on speed and explosiveness or a high volume of punches.

IA: The winner of your bout will battle the winner of Josh Taylor vs. Ryan Martin. Who are you picking to win?

AY: I think Josh Taylor will win that one, but it’s because I’ve seen Taylor fight, I haven’t seen Ryan Martin fight that much.

IA: Taylor was ringside for your last fight and a potential bout for your European title was talked about. Was it ever close to getting made?

AY: Not really, but it was because I never had the intent of fighting him outside of the WBSS, because I knew at that time that the WBSS was going to happen. Me fighting Josh Taylor is a huge risk because he is such a great fighter. If I came (into the tournament) with a loss, maybe I wouldn’t have gone into the WBSS, so I had to think smart, you know? When I knew it was going to be at super-lightweight (this season of the WBSS), I knew if I’m going to be there – Josh Taylor is going to be in there as well. That’s the perfect platform for us to fight.

IA: I believe you’ve also sparred with him and fought him as an amateur?

AY: As amateurs, I fought him in the pre-Olympics (London International Invitational) or something like that. They had this tournament before the Olympics in London and I fought him in the finals (Taylor won 13-10). It was a tough fight and he was a very skilled fighter back then and he’s developed so much since then – I noticed when I sparred him as a professional. When I moved to London, I trained there for one and a half years, I was going to help him out because he had a fight coming up and he needed some southpaw sparring. So, I sparred him twice, I think, and it showed he developed so much as a fighter. He’s got the whole package, so I believe he’s the strongest opponent I’ve got in the tournament. If I beat him next – I think nothing’s going to stop me from getting to raise that Ali Trophy.

IA: Who are you picking to win the main event on Saturday, Regis Prograis or Terry Flanagan?

AY: I think Regis is a great fighter, but his style is so brutal, you know? He can take a punch – he gives two punches and I just think he’s going to be too much for Flanagan. I just think that Flanagan is coming up from lightweight to super-lightweight and I haven’t seen him fight much, but he is an ex- world champion, but I just don’t think he has the strength to stand up to someone like Regis Prograis who relies on brute force, you know?

IA: Finally, what can we expect from Anthony Yigit on Saturday night?

Baranchyk vs. Yigit and Prograis vs. Flanagan – WBSS super-lightweight quarter-finals, emanate from the U.N.O Lakefront Arena in New Orleans. Tickets are available from just $30 via worldboxingsuperseries.com. The fight night will be broadcast in the U.S live on DAZN.