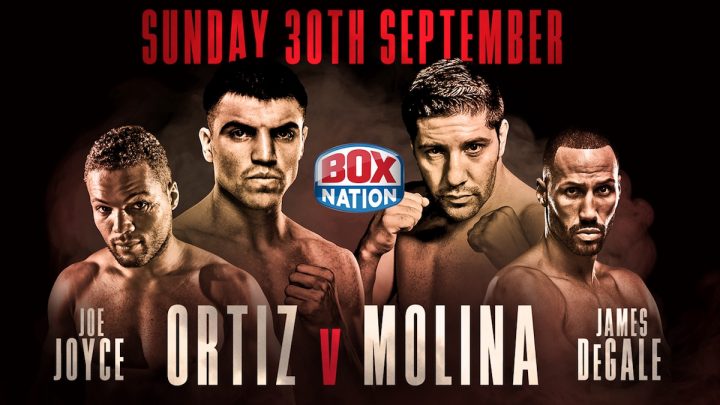 By Mike Smith: This Sunday’s fight between Victor Ortiz and John Molina Jr. has been canceled for this Sunday, but the fight card will still take place on Premier Boxing Champions on Fox Sports 1 on September 30. The main event is now featherweight contender Brandon Figueroa facing Oscar Escandon in a 10 round fight.

This was originally scheduled as the co-feature on the card, but it’s now been moved to the main event at the Citizens Business Bank Arena in Ontario, California.

Ortiz, 31, was pulled from the card due to him being charged with three felony sexual assault charges in Oxnard, California. Ortiz was arrested, but he’s since been released on $100,000 bail. What’s left of Ortiz’s boxing career is not looking good with these charges hanging over him. Ortiz was having problems with his career long before his recent legal problems. Ortiz lost to Floyd Mayweather Jr. in 2011, and he’s lost since then to Andre Berto, Luis Collazo and Josesito Lopez. In his last bout, Ortiz fought to a 12 round draw against former two division world champion Devon Alexander.

Molina Jr. (30-7, 24 KOs) loses out by Ortiz being pulled from the card. The organizers of the card attempted to find him an opponent, but they eventually scrapped the idea. Molina, 35, put in a hard training camp for the fight and he instead winds up with nothing to show for his work. Molina didn’t know Ortiz was going to be arrested and charged with three sexual assault charges, plus a forcible rape charge. It’s bad luck for Molina.

“Bad news — the fight has officially been canceled, obviously due to uncontrollable circumstances from Team Ortiz. Team Molina was ready,” said Molina on his Instagram on Wednesday. ”We’ll be in the ring real soon. Again, this is boxing and sometimes you don’t know the circumstances that are going to unfold. But we were definitely ready. Thanks for all the love and support and I’ll see you guys in the ring real soon.”

This is a major negative for Molina, because he hasn’t fought since December of 2017 when he stopped Ivan Redkach in 4 rounds. Unless Molina’s management is able to find him a fight in the next in the next three months, he’s going to be out of the ring for all of 2018. That’s not good if you’re Molina, who is trying to get himself in position for another world title fight. Molina fought only once in 2017, and it’s looking like he won’t fight at all in 2018. Beating Ortiz would have been a big win for Molina. If he could have added Ortiz’s scalp to his resume, it would have opened doors for bigger fights in the 140 and 147 pound divisions.

The unbeaten Figueroa (16-0, 11 KOs) now gets a prime shot at getting attention on his career with his main event fight against 34-year-old Escandon (25-4, 17 KOs). Beating Escandon will greatly help Figueroa’s career and put him on the map for some bigger matches. Figueroa is the brother of former WBC lightweight champion Omar Figueroa Jr. Escandon is a tough cookie, and he should give him a chance to show the boxing fans what he’s got. Escandon comes into the fight with recent losses to Tugstsogt Nyambayar and Gary Russell Jr. There’s no shame in losing to fighters in that class. If Figueroa can knockout Escandon, it would be a good win. Only talented guys have shown that they can stop Escandon.

The big 6’6” heavyweight Joe ‘Juggernaut’ Joyce (5-0, 5 KOs) will be fighting in the co-feature bout against Iago Kiladze (26-3, 18 KOs in a showcase fight scheduled for 10 rounds. The fight probably won’t go the full 10 rounds though, as the 2016 Olympic Silver medalist Joyce is a big puncher with an aggressive pressure style of fighting that makes it tough on his opponents. Kiladze, 33, has a pretty good chin, but he’s been recently knocked out by Adam Kownacki and Michael Hunter. Joyce might be an even better knockout puncher than those two guys. He’s certainly got more size than the two of them, which will make him a real problem for Kiladze on Sunday. Joyce has a chance to start building his fan base in the U.S with a quick knockout win over Kiladze. If Joyce looks real good, he’s going to open some eyes in the boxing world with the U.S fans. Joyce has knockout wins over Ivaca Bacurin, Lenroy Thomas, Donnie Palmer, Rudolf Jozic and Ian Lewison.

Joyce moved over from England to train with Abel Sanchez at his Big Bear training center in California. Joyce is with Al Haymon. It’ll be interesting to see how well Joyce has improved under the tutelage of Sanchez. This will be Joyce’s first fight with Sanchez as his trainer.

Joe Joyce to fight on Wilder-Fury card on December 1 »