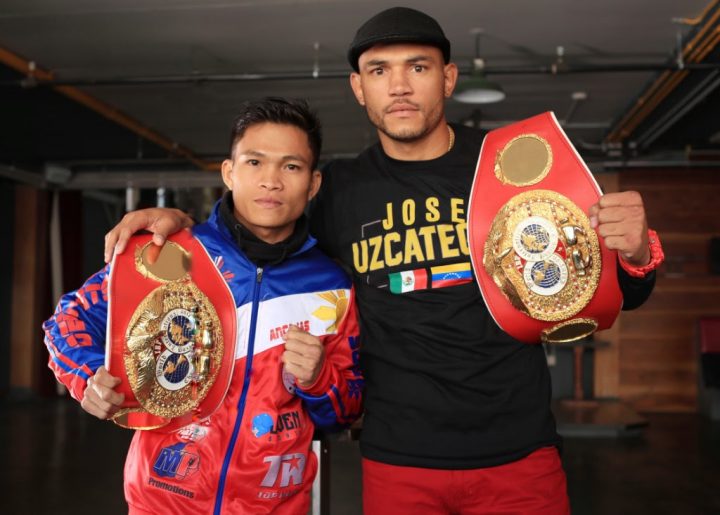 IBF junior bantamweight world champion Jerwin Ancajas and challenger Alejandro Santiago met briefly in the fight hotel on Tuesday and posed for a few photos. They were all smiles then, and they resumed the pleasantries Wednesday afternoon at the final press conference.

Ancajas (30-1-1, 20 KOs), the longest-reigning 115-pound world champion, will make the sixth defense of his title against Santiago (16-2-4, 7 KOs) on Friday at Oakland’s Oracle Arena (home of the Golden State Warriors) in the co-main event. In the main event, IBF super middleweight champion Jose Uzcategui (27-2, 23 KOs) will face Ezequiel Maderna (26-4, 16 KOs) in a 10-round non-title bout contested in the light heavyweight division.

Ancajas-Santiago and Uzcategui-Maderna will stream beginning at 10:30 p.m. ET on ESPN+ — the new multi-sport, direct-to-consumer subscription streaming service from The Walt Disney Company’s Direct-to-Consumer & International segment in conjunction with ESPN.

Here is what the fighters had to say.

“Since the beginning of my career, I have never underestimated anybody. I know that this is a great opportunity for Maderna. I know that he’s very hungry. He knows the opportunity that he has in front of him. I am going to try and put on a great performance for everybody.”

“I know that I’m in a tough division, but I believe I am the best in the division. I don’t see anybody coming and beating me.”

“I recognize that Jose Uzcategui is a great champion. I know his background, that he had a tremendous amateur career. That’s why he’s the champion. I can say that about myself, too. I also had a great amateur career. I fought in the 2008 Olympics {for Argentina). I’m going to try and do my best, especially since this is my first opportunity in the United States.”

On his last fought against Jonas Sultan

“The last fight, we weren’t that impressive. This time, we trained hard and long. We did things that we didn’t do before, and we’ll try our best to come up with a better performance this time.”

“This means a lot to me. I turned pro eight years ago. I’ve been training really hard for this fight. I am going to do my best to take this title with us.”

“I feel very comfortable. I don’t feel any pressure. If you look at my record, I’ve fought plenty of guys in their backyards. I prepare myself for 12 rounds. I won’t go in there looking for the knockout. I’m going to go in there and try and win the rounds.”

“Since the Valdez fight, I’ve improved a lot. Valdez is very good, and I want to put on a good fight again.”

“I had a very hard training camp in Japan, and I look forward to entertaining the fans. If I get a chance to fight Oscar Valdez again, I’d love to have that opportunity.”

“It means everything to be fighting here in this arena, especially with great players like Stephen Curry, Kevin Durant, Draymond Green…. all those great guys. And even for this to be the home of Andre Ward is also a blessing with him broadcasting the fights. It’s an honor and a privilege to be in the presence of this.”

On the custom pillows he brings in the ring

“I had a fight in Detroit {in March 2017}. I fought a guy named James Gordon Smith. He was very disrespectful. Him, his matchmakers, his whole team was very disrespectful to me. So I said I’m going to get under their skin. I brought the pillow to the weigh-in and everybody started laughing, so I knew I got in his head. Come fight night, I caught him with a good shot, knocked him out, and the whole city of Detroit was mad. They were like, ‘Oh, he’s so disrespectful,’ but at the end of the day, I started with that. It keeps me working hard because I want to keep bringing the pillow out, keep performing, and keep doing what I’m doing with great knockouts.”