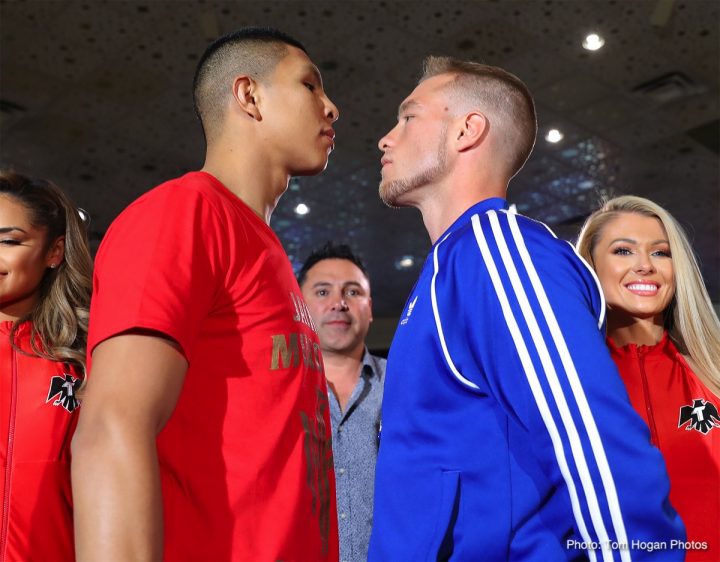 By Jim Dower: Jaime Munguia (30-0, 25 Kos) arrived in Las Vegas for grand arrival on Tuesday for his tile defense of his World Boxing Organization junior middleweight title against Brandon Cook (20-1, 13 KOs) for their fight this Saturday night on HBO PPV at the T-Mobile Arena.

Munguia vs. Cook will be fighting on the Saul Canelo Alvarez vs. Gennady Golovkin 2 card. This is a fight that could be the fight of the night.

Munguia is huge for the 154 pound weight class. He’s still running to get down to the limit.

Munguia, 21, will be making his second defense of his WBO title against Cook. The fight is scheduled for 12 rounds. It’s very important that Munguia put in an impressive performance against Cook. This is a highly visible card for Munguia to be fighting on. It’s a great opportunity that doesn’t come around too often. Munguia didn’t impress in his last fight in defeating former WBO junior middleweight champion Liam Smith by a 12 round unanimous decision on July 21. Although Munguia won the fight wide on the scorecards, he took a lot of shots from Smith and showed poor defense.

Munguia’s arrival today was well received by the boxing fans in attendance. For a fighter that has only recently been getting attention in the boxing world since earlier this year, Munguia’s popularity is moving at a meteorite pace. It was two fights ago that Munguia caught the attention of the boxing world when he stepped in as a replacement for ill Liam Smith to challenge Sadam Ali for his WBO 154 pound title on May 12, and the rest is history. Munguia destroyed Sadam in 4 rounds and looked incredible in winning the fight. However, Munguia didn’t look good against Liam Smith in his next fight.

“I’m very happy for the support that I’m getting from the fans,” Munguia said. ”I feel they are drawn to me because of my style of fighting and because they know I like to give a great show to the fans. Right now, it’s just about maintaining weight and preparing for the weigh-in. I know Cook is tough and difficult fighter, but you’re going to see a more relaxed and concentrated Jaime Munguia this Saturday.”

The boxing fans like what they see of Munguia so far, but he’s going to need to keep winning if he wants to continue to have fans showing interest in his fight. Munguia’s promoters at Golden Boy Promotions haven’t shown the desire to match him against the lion’s in the junior middleweight division like Jermell Charlo, Erislandy Lara, Julian Williams, Jarrett Hurd or Kell Brook.

There’s a good chance that Munguia would lose to all of those fighters. If Munguia can’t beat those type of fighters, then his soaring popularity will prove to be short lived. Munguia is going to need to fight Julian ‘J-Rock’ Williams sooner or later, as he’s ranked #2 by the World Boxing Organization.

Cook was scheduled to fight Kell Brook last July, but the fight was canceled after the British fighter suffered an ankle injury. The 32-year-old Cook hasn’t done anything to be given a world title shot. For some odd reason the WBO has Cook ranked #3. He was knocked out three fights ago by Kanat Islam. It’s a good thing for Munguia that Cook is ranked so highly because it gives him an easy mark for a showcase fight on Saturday. Munguia is going to need to improve in a hurry if he wants to beat the top fighters in the division like Williams, Brook and Lara.