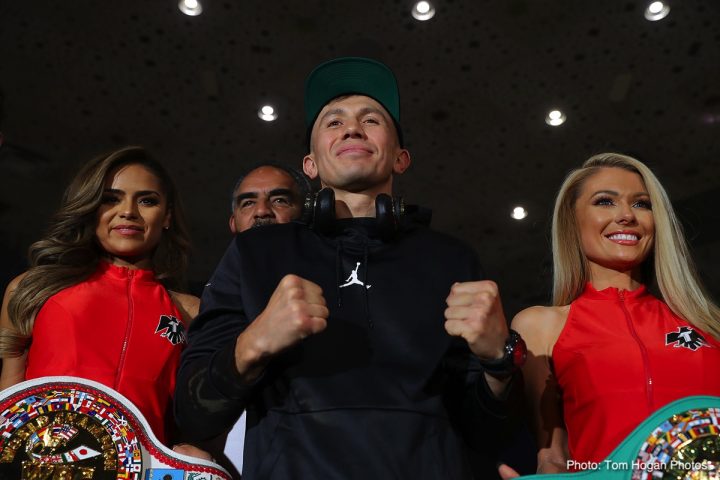 Canelo tested positive for clenbuterol last February, which deeply upset GGG, because it wiped out their May 5 rematch, and caused it to be pushed back to September 15. Canelo and GGG will be facing each other this Saturday night in a rematch that took a year to take place,

The criticism that Golovkin is receiving from boxing fans pertains to his reasons for wanting to fight Canelo again. If Golovkin truly believes Canelo was cheating with drugs, then why fight him again and put his health at risk? It’s a valid question that boxing fans have about Golovkin. If he believes that Canelo cheated with drugs, then he shouldn’t be fighting him again, should he? Is it greed on Golovkin’s part? There’s obviously loads more money for Golovkin to make fighting Canelo than there would be for him to risk his unbeaten record against the likes of Jermall Charlo, Billy Joe Saunders, Demetrius Andrade and the winner of the Daniel Jacobs vs. Sergiy Derevyanchenko fight. Those are tough fighters with a lot of talent, but there’s not going to be a lot of money for GGG to make fighting any of them.

It looks bad that Golovkin is restarting his trash talk about seeing injection marks on Canelo’s body. The timing of Golovkin mentioning this might be construed by some boxing fans as fear on his part. By saying stuff about injection marks, it gives the impression that Golovkin is coming up with an excuse to help explain away a potential loss on Saturday night. If boxing fans think Canelo was using clenbuterol or another unauthorized substance, then he won’t look as bad if he loses the fight. The excuse will have been implanted in the minds of impressionable boxing fans.

What Golovkin might be seeing on the arms and body of Canelo is mosquito bites and not injection marks. Canelo trained in Mexico for the first fight with Golovkin, and might have been bitten by hungry mosquitos while in the mountains training. Canelo didn’t test positive for drugs in the first fight with Golovkin. Canelo was clean, so there’s nothing that can be said. if Canelo had tested positive last time, then there would be an argument that could be made last September, but that’s not the case. Canelo was as clean as a whistle. It wasn’t until well after the fight with GGG that Canelo tested positive for clenbuterol. Canelo has a valid explanation for his two positive tests for clenbuterol due to having eaten contaminated meat in Mexico. This is a problem that is rampant in Mexico with cattle producers using clenbuterol to lean out the meat of their cattle.

”I eat it,” Estrada said to the latimes.com about eating beef in Mexico. ”I don’t inject it.”

Canelo might have eaten more of the beef that had a higher concentration of clenbuterol. The cattle producers likely put various amounts of clenbuterol in their feed. It’s unlikely that the same amounts of the substance is put in the feed of the animals, which might explain why Canelo tested positive while some of other fighters in Mexico haven’t tested positive.

“Here in Nevada, they seem to accept the stacking [of hand-wraps], which everybody in the boxing business know is an illegal way of wrapping hands,” Sanchez said. “Because Nevada allows it and the rules are kind of vague…There are rules in their bi-laws that say you are allowed to use a maximum of 12 feet of two inch tape. That in turn would be 24 [feet] of 1 inch tape. If you look at the incident where I protested, they used a whole roll on the first layer, which is 30 feet and then they used another roll, which is anther 30 feet. To me, that’s 50 to 60 feet. I’m questioning that, and Tom [Loeffler] and I have had discussions with Mr. Bennett. I want those rules followed. I want that talked about now. I don’t want to wait until the fight and we’re in the dressing room. I don’t want to disrupt their concentration. But what I want is to get it resolved now, because it is 24 feet,” Sanchez said.

Sanchez and K2 promoter Tom Loeffler need to talk to the Nevada Commission before this Saturday night rather than waiting the last second to start complaining about the way that Canelo has his hands wrapped. I don’t think it’s going to change anything though. If this is the way that fighters have their hands wrapped in Nevada, then Sanchez is going to have to accept that this is the way things are done there. Instead of complaining about, Sanchez can always have Golovkin’s hands wrapped in the same way so that it’s an even playing field in his mind. If Sanchez is only using 24 feet of 1 inch tape for Golovkin, then he needs to do what Canelo’s team is doing so that things are exactly the same way. It seems only obvious that Sanchez should follow what the customs are in Nevada. As the saying goes, ‘When in Rome, do what the Romans do.’ That should apply with the hand wraps for GGG. It boils down to whether the Nevada Commission accepts the way that Canelo and his team wraps his hands. Right now, it seems that they’re fine with the way that his hands are wrapped.

Golovkin didn’t look good against Canelo last September. This was the second opponent that Golovkin has looked bad against in the last two years. Golovkin had problems against Kell Brook and Daniel Jacobs. Canelo is just a continuation of the problems that GGG has been having.

This fight is all about Canelo reinventing his legacy with the boxing public. A win for Canelo over GGG will turn things around completely with the fans. A knockout win for Canelo would undo all the damage to his reputation that came from the clenbuterol scandal. Things will be like they were before the scandal.