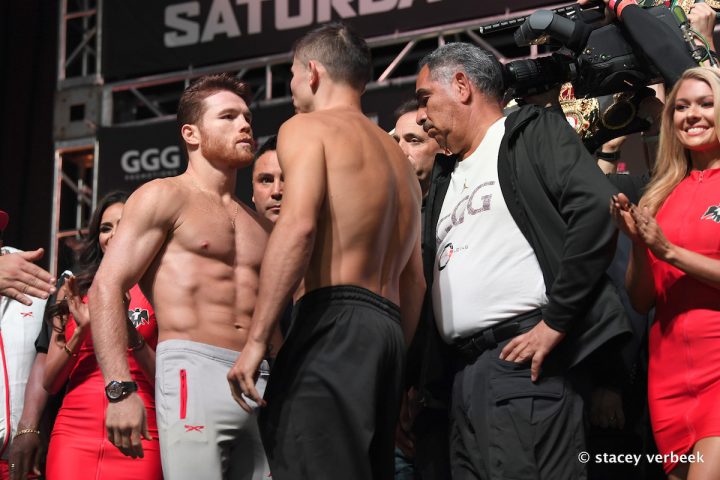 By Mike Smith: Saul Canelo Alvarez is getting a guaranteed purse of $5 million for his rematch with Gennady ‘GGG’ Golovkin tonight at the T-Mobile Arena in Las Vegas, Nevada. However, both fighters are expected to make much more from the gate and pay-per-view revenue from HBO.

GGG is expected to make over $20 million. The purse split is said to be 55-45 in Canelo’s favor. Golovkin received a 70-30 split in the first fight with Canelo on September 16 last year at the T-Mobile Arena. For their canceled May 5 rematch, GGG had agreed to a split of 65-35.

Canelo’s two positive tests for clenbuterol and his subsequent six month suspension handed down by the Nevada State Athletic Commission caused the May 5 rematch to be canceled. GGG ended up fighting Vanes Martirosyan instead, who his management at K2 Promotions had to find on three weeks’ notice. After that bad experience, Golovkin wanted a 50-50 split, but he eventually agreed to a 55-45 split just so that the fight could get made.

It’s almost a given that Canelo and Golovkin will wind up facing each other in a third fight in 2019 on Cinco de Mayo holiday weekend. If their fight tonight brings in huge PPV numbers, then it’s hard to imagine the two fighters not electing to face each other a third time. This is business and there’s no one else in the 160 pound weight class that GGG and Canelo can fight to make anywhere near the kind of money they can get facing each other. Unless someone like Floyd Mayweather Jr. wants to come out of retirement to face the Canelo-GGG2 winner, they’re better off continuing to fight each other until the boxing public stars losing interest.

It would help immensely if the Canelo vs. Gennady fight tonight doesn’t end in controversy again. It would hurt future rematches between them if the boxing public doesn’t trust the judging. The previous Canelo vs. Golovkin fight tainted the fight due to the scoring by the judges, who scored it a 12 round draw. It appeared to be a close but decisive win for Golovkin. The judges scoring it a draw made it seem like they were helping the more popular fighter Canelo. The two positive tests for clenbuterol by Canelo, which took place last February, made him look like a cheater. That’s also something that can’t continue if he wants to keep his popularity at a high level. The boxing fans are forgiving in receiving some bad news from superstars like Canelo, but if this becomes a chronic thing, they’re not going to believe the tainted meat excuses or whatever other excuses that he comes up with to explain away why he tested positive.

In other purses for tonight’s Canelo vs. Golovkin 2 card on HBO, World Boxing Organization junior middleweight champion Jaime Munguia (30-0, 25 KOs) is receiving a purse of $250,000 for his title defense against #3 WBO contender Brandon Cook (20-1, 13 KOs). Munguia, 21, is getting a nice payday for a fighter who is making just his third high visible fight during his five-year pro career. Munguia’s popularity is sky-rocketing in the boxing world since his 4th round destruction of former WBO 154lb champion Sadam Ali on May 12, and then his fun to watch 12 round unanimous decision win over former WBO junior middleweight champion Liam Smith on July 21. Munguia vs. Smith was a real war with both fighters unloading huge shots from start to finish. Neither guy was interested in defense. In the end, Munguia’s punching power and high work was the telling factor in the fight. Munguia never got tired. He’s seen as a future star in the same light as Saul Canelo Alvarez. Munguia is not as fast as Canelo, but his stamina is considerably better and he’s much bigger and arguably more suited to fighting at 160 one day at 6’0”. Munguia can still make 154, but he’s expected to eventually make the move up in weight to 160 sooner or later.

David Lemieux (39-4, 33 KOs) is getting a nice purse of $200,000 for his 12 round fight against Golden Boy Promotions banger Gary ‘Spike’ O’Sullivan (28-2, 20 KOs) in middleweight action. O’Sullivan, 34, is getting double at $400,000, which is obviously a lot of money for a non-world champion and for someone who may not ever be a world title holder. In scanning the 160 pound weight, there are no belt holders that O’Sullivan would have much of a chance to beat other than perhaps WBA ‘regular’ champion Ryota Murata. However, O’Sullivan is an underdog for tonight’s fight with Lemieux, so he’s going to need a lot of luck for him to win this fight and to continue to move forward to bigger paydays. O’Sullivan’s best chance for a world title shot is against Canelo. If the Mexican fighter beats Golovkin tonight to win his IBO, WBA and WBC 160 pound titles, then he’s expected to challenge him for his titles in December on HBO PPV. O’Sullivan will make a lot of money fighting Canelo on HBO PPV. It would be an interesting fight, as O’Sullivan is arguably undeserving of a world title given the poor quality of his opposition since his 7th round knockout loss to Chris Eubank Jr. in 2015. O’Sullivan has won his last six fights, but against obscure fighters. The only notable ones of the bunch are Nick Quigley and Antoine Douglas, both of which were fringe contenders. Golden Boy matched O’Sullivan against a welterweight named Berlin Abreu in his last fight on May 4 on the Ryan ‘Kingry’ Garcia vs. Jayson Velez card. As one would expect, O’Sullivan blew out the little known welterweight Abreu in a 3rd round knockout.

Former super flyweight belt holder Roman ‘Chocolatito’ Gonzalez (46-2, 38 KOs) is getting $200,000 for his 10 round fight against former WBO minimumweight champion Moises Fuentes (25-5-1, 14 KOs) at 115. Fuentes weighed in one pound over the super flyweight limit at 116 last Friday. Fuentes will be getting $35,000. Gonzalez is getting an excellent payday for a fighter who has lost his last two fights against Srisaket Sor Rungvisai. A lot of people in the sport of boxing see the 31-year-old Gonzalez as a shot fighter that needs to retire. Gonzalez admits that the thought of retirement crossed his mind, but he decided he wants to fight on in pursuit of a fifth division world title at 118. Gonzalez has won world titles in four weight classes at 105, 108, 112 and 115. It’s going to be a lot tougher for Gonzalez to move up to bantamweight to capture a 5th division world title against one of the champions in that weight class, especially given that the IBF, WBA and WBO bantamweight titles will soon be unified with one champion holding the belts. The current IBF, WBA and WBO champions Ryan Burnett, Naoya Inoue, Emmanuel Rodriguez and Zolani Tete are competing in the upcoming World Boxing Super Series bantamweight tournament in October. The eventual winner of the tournament is going to be very, very tough to beat for Roman Gonzalez. It would be wiser for Gonzalez to the World Boxing Council 118 pound title, which is currently vacant and expected to be fought over by Nordine Quabaali and Petch Sor Chipattana. Gonzalez would have a decent chance of beating the winner of that fight. However, he’s going to need to get to the winner before one of the tougher contenders get there first and wind up unseating the winner.


« Warrington vs Frampton on Dec. 22 in Manchester

Golovkin: I saw fear from Canelo, he “couldn’t look into my eyes” »