Golovkin: I saw fear from Canelo, he “couldn’t look into my eyes” 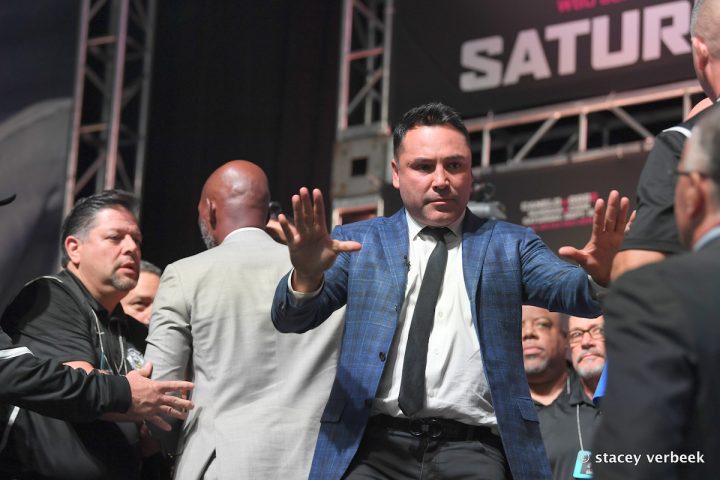 By Sean Jones: Gennady Golovkin thinks Saul Canelo Alvarez was afraid of him at Friday’s weigh-in, and that he purposefully avoided the face-off with him by acting like a “clown” and sabotaging the stare-down by bum rushing him. GGG saw Canelo’s decision to ruin the face-off as a move to avoid looking him in the eyes.

Whether it’s shame on Canelo’s part for having tested positive twice for clenbuterol last February or fear of looking at the intimidating Golovkin is the big question. Golovkin’s eyes are like the eyes of a Great White shark when he’s staring at his opponents. He’s sizing them up and ready to tear them apart. It’s unnerving for any of Golovkin’s opponents to look him in the eyes, because he’s not the happy go lucky person that he portrays when he’s staring at them during the face-offs

Since the promotion began for the September 15 rematch, Canelo has avoided having face-offs with Golovkin, saying he didn’t want to look at him because of the trash talking he’s done since their first fight last year. Canelo didn’t want to face-off with Golovkin until the final week of the fight. However, Canelo still chose not to have a face-off with GGG at the final press conference this week, which had a lot of boxing fans wondering if the Mexican star had changed his mind about having face offs this week with Golovkin. Last Friday’s weigh-in was the last chance for a face-off between the two fighters. Unfortunately, Canelo made a mess of things by running at GGG, pressing his head against him, looking like he was about to throw punches, and then being pulled away by his team.

The 28-year-old Alvarez wasn’t ready to admit that he had intentionally sabotaged the face-off with Gennady, even though that’s exactly what it looked like to some boxing fans. Canelo had the look of someone who was so petrified with fear that he wasn’t thinking clearly, and was going to do something he might be sorry for later. That’s how fear is unfortunately. It can work for you or against you, and in Canelo’s case, his actions were erratic without sense, like someone whose brain had gone haywire during the heat of battle. Some people can’t take high pressure situations and it looked like Canelo was no longer firing on all eight cylinders with his brain functioning when the moment came for him to face-off with GGG for the first time in 12 months since last September. Canelo’s fear appeared to get the better of him, causing him to act out in a way that suggested that he had gone berserk.

This was Canelo’s explanation he gave after the ruined face-off with GGG:

“I got excited and motivated by the fans. I defeated the weigh-in, and now it’s time to defeat him [Saturday] night. It’s going to be an exciting fight and big victory.”

The fans believe that Canelo was afraid to face-off with Golovkin, so he did the only thing he could to avoid the situation by bum rushing him, and causing his own team members to rush in and pull him away. If it’s a situation where Canelo feels hatred and anger towards Golovkin for him being critical of him after his two positive tests for clenbuterol last February, then he needs to try and put the shoe on the other foot. If Golovkin were the one that tested positive for clenbuterol twice after he’d been given what many boxing fans saw as a gift 12 round draw against him last September, then Alvarez would likely be upset and talking trash constantly. If Alvarez thought he was fighting a PED-using GGG last September, he probably wouldn’t have been too happy about it, would he? Canelo not looking Golovkin in the eyes gives the impression that he’s afraid of him. The thing is, Canelo will need to look Golovkin in the eyes constantly tonight, so it’s not as if he’s going to be able to avoid the situation. This fight isn’t going to end right away. Canelo lacks the size, endurance and punching power to knock Golovkin out. That means that Canelo’s only realistic hope of winning the fight is to go 12 rounds tonight. Golovkin is the one that has a chance of getting a knockout tonight.

GGG’s trainer Abel Sanchez was disappointed in what he saw from Canelo with him ruining the face-off. He thinks it’s going to end badly for the 5’8” Mexican star tonight.

”What you saw on the stage was Canelo’s world collapsing around him,” said Sanchez to ESPN.com. “Saturday night, there will be no escape.”

You can’t underestimate what a fighter is willing to do if they’re afraid of their opponents in the way that Canelo looks terrified of Golovkin. If Canelo can’t handle the heat that Golovkin puts on him due to his fear of him, he might unload with everything in rounds 1 or 2, hoping that he can get lucky and score a knockout. It would be a senseless way of fighting an experienced pro like Golovkin, but fear makes a fighter do funny things. I think we saw that with the way that Canelo acted during the brief face-off with the Kazakhstan knockout artist Gennady last Friday.

Canelo had a wild-eyed look on his face that suggested that he wasn’t in his right mind and needed someone to save him from himself. Luckily for Canelo, his training team yanked him away from GGG when they saw that he was imploding in close proximity. We saw a mental meltdown by Canelo at that moment, and his training team did the only thing they could in ushering him away from Golovkin at light speed before he did something really crazy. I think it’s reasonable to assume that we’re going to see more of the same from Canelo tonight when he get inside the ring with GGG at the T-Mobile Arena in Las Vegas, Nevada. For whatever reason, Canelo can’t seem to look Golovkin in the eyes. Call it guilt, shame or whatever, but it’s clear that Canelo can’t look Golovkin in the eyes any longer. With the way that Canelo is acting, I think there’s a good chance this is going to play out in a way in which he bum rushes Golovkin in an all-out battle charge in the 1st round, hoping that he can take him out immediately with a blistering attack. Unfortunately, history has shown us that it’s not wise to attack an overwhelming force when you’re under equipped physically. It doesn’t work in war most of the time, and it likely will end badly for Canelo tonight. But it shows what fear can do to a person when they substitute fear for reason. Canelo is going to find out his destiny tonight when he gets inside the ring with Golovkin. If Canelo’s training team can still reach him mentally, then they need to give him a quick pep talk in between rounds after round 1 to make sure he’s got his feet on the ground and not about to get himself knocked out. They were able to save Canelo from himself at the weigh-in, but they may not be able to help him tonight inside the ring other than to throw in the towel or wave the white flag of surrender to the referee when things get completely out of hand.

With the way that Canelo looked at the weigh-in, it’s not going to go well for him tonight in my estimation. I can’t see this fight going even six rounds. Canelo looks like he’s not mentally there for this fight, and he looks too slender.

Boxing » Canelo Alvarez » Golovkin: I saw fear from Canelo, he “couldn’t look into my eyes”