Golovkin: I want to punish Canelo 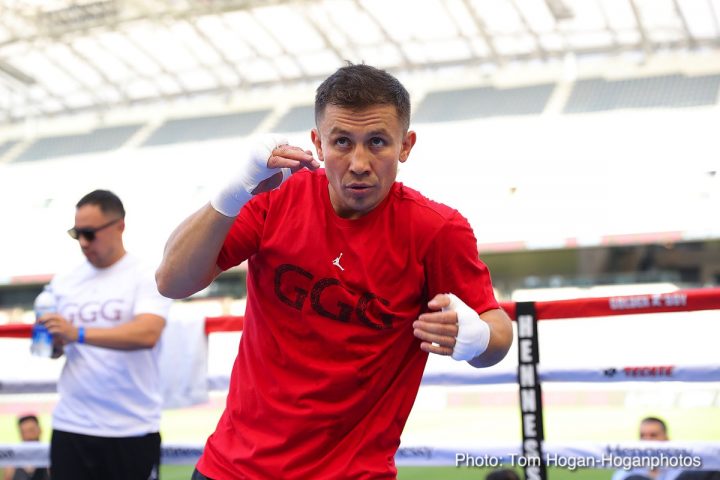 By Sean Jones: Gennady Golovkin says he wants to punish Saul Canelo Alvarez for all the bad things he and his team have done. Golovkin (38-0-1, 34 KOs) didn’t mention the specifics of what Canelo (49-1-2, 34 KOs) did in him wanting to knock him out in their rematch on September 15, but it seems obvious that his two positive tests for the banned substance clenbuterol is at the top of the list.

GGG says he wants to turn it into a big drama show to pay Canelo back for everything he’s done. Golovkin says Canelo as a dirty fighter and he plans on giving him s real thrashing when he gets a whole of him.

Canelo’s two positive tests, the hand-wrap stacking, his failure to be apologetic and show shame are all things that likely have GGG wanting to give Canelo a proper beating. There’s also Canelo’s attempt to use untested gloves for the rematch, and the controversial 12 round draw from the first fight last September in which the Las Vegas judges appeared to give the Mexican star preferential treatment in the eyes of a lot of fans.

Golovkin thinks he was robbed by the judges last time he fought Canelo. In recent weeks, Canelo surprised a lot of people by saying he thought he should have won the Golovkin fight by an eight rounds to four margin, which isn’t too far from the ten rounds to two score handed down by judge Adalaide Byrd.

”We are not dirty and we will defend our honor and defend our title,” Golovkin said. ”I want to punish him. I want to have a fight and punish him for all the bad things that he and his team have done, so basically to put them — to size him down and to put him and his team in their place.”

If Golovkin, 36, fights angry against Canelo in the same way he did in round two in his last contest against Vanes Martirosyan, the fight might not last more than a round or two. Martirosyan landed two hard shots at the end of round one against GGG in their fight on May 5 at the SubHub Center in Carson, California. Golovkin looked angry at having taken hard shots from Martirosyan in the previous round. We saw he same anger flash from Golovkin in the 7th round in his fight with Canelo last September after he’d been fouled by him in the 6th.

Canelo had been allowed by the referee Kenny Bayless to put Golovkin in a headlock and then reach around by his back and hit him in the face. It was a cheap shot done by Canelo to embarrass Golovkin, and he referee Bayless just stood and watched without lifting a finger to penalize the Golden Boy star. Golovkin came out looking for blood in the next round and proceeded to batter Canelo for the entire round. The judge that scored the fight 114-114 gave the 7th round for Canelo, which is another reason why a lot of boxing fans felt that Golovkin was robbed. Scoring that round for Canelo was incredibly odd.

”Canelo has done some things that Gennady feels he needs to pay for and he’ll do that in the ring,” trainer Abel Sanchez said. ”His mentality to this fight seems to be very, very focused on trying to punish Canelo — as he was when he fought Curtis Stevens.”

Five years ago, Curtis Stevens had done some trash talking towards Golovkin before their fight in 2013. This angered Golovkin deeply and made him want to punish him during the fight. When the two met up in Madison Square Garden in New York for their fight, Golovkin appeared to take his time in giving Stevens a methodical beat down before finally stopping him in the 8th. The 5’7” Stevens’ lack of height and reach made it impossible for him to reach the taller 5’10 ½” Golovkin with his power shots in the fight.

Canelo, 5’8”, is just an inch taller than Stevens, but he has a shorter reach by an inch. If Golovkin decides to stay on the outside and jab Canelo all night long, there’s not much he’s going to able to do about it, as we saw in their first fight. Canelo was helpless when Golovkin was jabbing from the outside. However, the judges were still giving Canelo rounds even when he was being dominated from the outside, so GGG is going to need to do more than control the fight from the outside to beat the popular Mexican fighter.

Sanchez and Golovkin are hoping that Canelo is willing to fight this time and not run around the ring trying to survive like he did in the last fight. Golovkin says that Canelo had fought like that in some of his past fights, but it still surprised him that he fought in such a timid manner against him because he thought he would show courage.

”He always has a way of running on the ring, but it was his style,” Golovkin said about Canelo. ”He was really avoiding fighting close to me. I think that’s exactly what happened, but what he’s trying to say right now, it just proves that he’s not keeping his word. He’s trying to deceive people again, and being dishonest,” Golovkin said.

I think it’s very likely that Canelo will fight Golovkin exactly how he fought him the last time. Canelo is a counter puncher by nature, and those types of fighters rarely take the lead when they fight good opposition that can hurt them. In the fights that Canelo was the aggressor in the past, he was facing guys that were out of his league due to them being old, small or not talented. Not surprisingly, Canelo was the aggressor against these fighters: Alfredo Angulo, Amir Khan, Josesito Lopez, Shane Mosley, Jose Miguel Cotto, Kermit Cintron, Matthew Hatton, Ryan Rhodes, Alfonso Gomez, Liam Smith, Erislandy Lara and Lovemore N’Dou.

Canelo wasn’t coming forward as much when he fought Austin Trout and Floyd Mayweather Jr. In the Golovkin fight last September, Canelo only came forward for brief periods in rounds 10, 11 and 12. It was always at the start of the rounds, and immediately after that, Canelo would go back to his retreating pattern in the final two minutes of the rounds. The three judges gave Canelo the final three rounds and the first two. It didn’t look like Canelo deserved the last three rounds. It appeared that he won the 11th, but lost the 10th and 12th, but obviously not in the eyes of the three judges that worked the fight.

“It doesn’t matter what they say. We’ll see what happens on September 15 because very often what they say doesn’t correspond to what they do. So let’s wait until September 15,” Golovkin said in response to a comment about Canelo saying that he’s going to be more aggressive in the rematch.

Golovkin doesn’t seem to believe that Canelo will be any more aggressive than he was in the first fight. It would be interesting if Canelo does come out looking to trade with GG this time around because it was boring much of the time in the first fight with all the movement and defensive tactics that Canelo was using. Canelo looked like he was trying to trying to copy Floyd Mayweather’s fighting style and not doing a good job of it. Mayweather doesn’t eat jabs and run out of gas in each round the way that Canelo was against GGG. Canelo will need to fight a lot harder this time if he wants to get the victory because it’s a bad look with him sitting against the ropes, looking red-faced and tired and not showing that he’s the younger fighter. The younger fighters are supposed to take the fight to the older guys. hat’s how it’s traditionally done. Canelo was 27-years-old last year when he fought the 36-year-old Golovkin, and yet he fought like he was the older guy. Canelo needs to do something about that for him to be viewed as the winner. 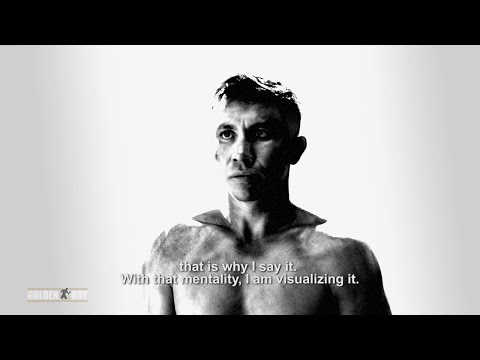 Garcia vs. Porter: Danny confident of victory against Shawn »