Garcia vs. Porter: Danny confident of victory against Shawn 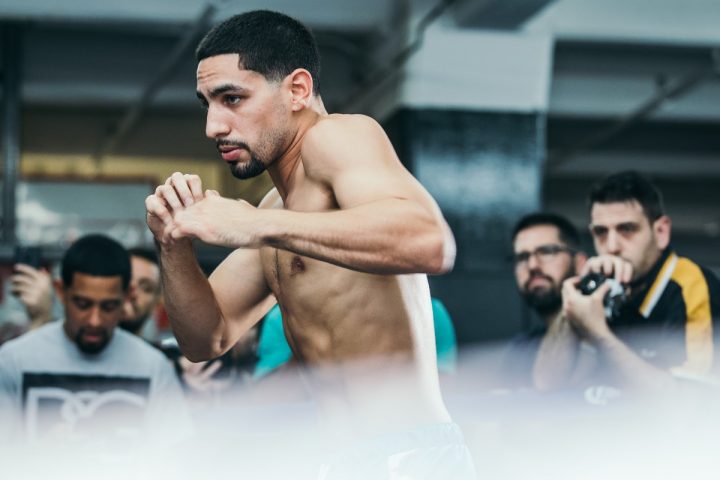 By Jeff Aranow: Danny Garcia says Shawn Porter’s fighting style is the exactly the type that he does well against, and he can’t wait to use his counter punching game to beat him this Saturday night in their clash for the vacant World Boxing Council welterweight title at the Barclays Center in Brooklyn, New York.

Garcia, 30, thinks he’ll be able to land his counter shots to get a victory like he did in his fight against Amir Khan. However Porter isn’t known for having a weak chin like Khan, so it’s going to be interesting to see if Garcia’s occasional big shots are going to have any impact on Porter.

“Shawn’s style is exactly what I like to go up against. I want him to come forward and walk into my counter punching. I have power in both hands and I’m going to make him feel it,” Garcia said.

The problem that Garcia has is he has never beaten anyone with the same talent and pressure style of fighting as Porter in his career. Garcia’s wins in the last six years have come against weaker fighters. It’s going to be a big step up in class for Garcia in fighting a guy with all the physical skills that the 31-year-old Porter brings to the table.

Garcia’s wins since 2013 have come against these fighters: Paulie Malignaggi, Amir Khan, Robert Guerrero, Samuel Vargas, Brandon Rios, Rod Salka, Lamont Peterson, Mauricio Herrera, Lucas Matthysse and Zab Judah. Garcia almost lost to Herrera, Peterson and Guerrero. Even Judah gave Garcia tremendous problems. Suffice it to say that Porter would run through Garcia’s entire resume and beat everyone but Keith Thurman, who he came close to beating in 2016. Porter fought a healthy Thurman and came very close to beating him. Garcia fought an injured Thurman and had major problems against him until the 2nd half of the fight when his injured left elbow began to trouble him. Thurman came into the Garcia fight with the injury.

“If he comes and opens up, I’m going to land a clean shot early. If he can’t recover, then I’m going to have a chance to finish him. I’m going to dictate the pace and fight my fight,” Garcia said.

It’s difficult to picture Porter getting knocked out by anyone in the welterweight division other than Errol Spence Jr. and perhaps Terence Crawford. I’m not sure that even Crawford could KO Porter, because he would likely keep the fight on the inside the entire fight and that’s a bad place for the long-armed Terence to be. He’s not made for inside fighting.

“I see Danny putting up a good fight, but Porter is going to make the fight rough and Garcia doesn’t’ like those type o fights,” said former three division world champion Robert ‘The Ghost’ Guerrero. “I’m going with Porter to win by a split decision.”

Guerrero came very close to beating Garcia in their fight in 2016. Guerrero was walking Garcia down and hitting him with shots the entire fight. Garcia did not do well with that pressure that Guerrero was putting him under. It was the same for Garcia’s fights against Lamont Peterson and Thurman. Porter is going to be a major problem for Garcia if he’s able to stay on top of him the entire fight.


« Golovkin: I want to punish Canelo

Charles Martin: I’m ready for everything Kownacki can bring »