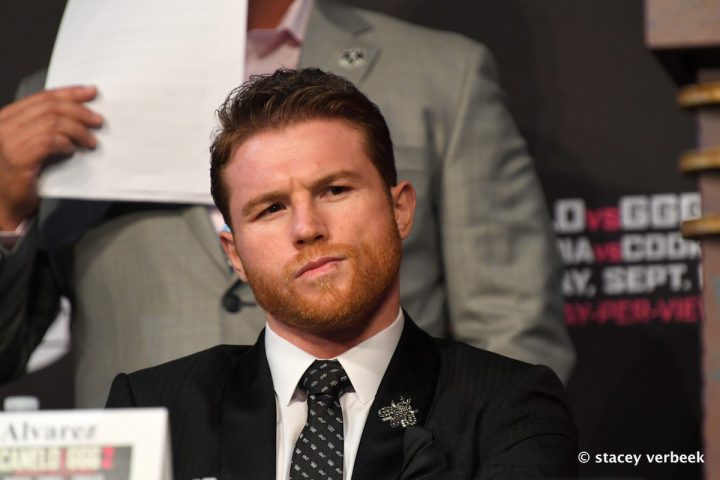 By Dan Ambrose: Saul Canelo Alvarez will be joining middleweight champion Gennady Golovkin with his contract expiring with network giant HBO this Saturday night in their rematch on pay-per-view at the T-Mobile Arena in Las Vegas, Nevada.

Golovkin’s contract reportedly expires as well with HBO, and it’s unknown if he’ll re-sign with them. If HBO loses both Canelo and Golovkin, then it will take away the network’s two biggest names. Canelo’s promoter Oscar De La Hoya of Golden Boy Promotions questions whether HBO is still interested in boxing.

Canelo fights Golovkin on HBO this Saturday on HBO PPV. The fight is expected to bring in a huge numbers and it may even eclipse the 1.4 million buys the first fight brought in last year on September 16, 2017. It’s hard to imagine HBO not attempting to re-sign Canelo and GGG given that the two of them could wind up making a rubber match to decide who the overall better fighter is. The money that a third Canelo-GGG can pull in for HBO would be huge if their second fight on Saturday is an exciting one. It would be in HBO’s best interest to re-sign both Canelo and GGG if they have the means to do so.

“ESPN, DAZN and the fact that Fox television has paid millions and Showtime’s doing many things, it’s going to be very interesting for us and Canelo to see what HBO can do to keep him,” De La Hoya said to the latimes.com. “I want to do what’s best for Canelo’s career, and right now particularly, boxing is big business on television, with more than 200 fights on a year.”

If Canelo signs with DAZN, he’d be taking a gamble of his fights not being seen by as many boxing fan due the streaming network being a new one. ESPN would give Canelo a chance to be seen by a lot of boxing fans on PPV. However, it’s likely that Canelo’s replays of his fights would be shown on ESPN+, a $5 per month subsripion service rather than on regular ESPN. There would arguably be fewer boxing fans seeing Canelo fight than if ESPN showed his replays on regular ESPN, which you can argue would be a better move for him if he wants to increase his popularity with the casual boxing fans. Of course, it will depend on who Canelo is facing. If he’s being matched against beatable guys like David Lemieux and Gary ‘Spike’ O’Sullivan, then it’s a good thing that his fights will be seen by a massive amount of people on ESPN. But if Canelo is fighting guys that can beat him like Golovkin, Jermall Charlo, Demetrius Andrade, Billy Joe Saunders and Sergiy Derevyanchenko, then it’s good that fewer boxing fans are seeing his fights.

Without Canelo and GGG, HBO will be more reliant on the SuperFly cards put on by K2/ While here is some interest from casual boxing fans in seeing 115 pound fighters, it’s not a weight class that will be able to create huge interest once Canelo and GGG are no longer with HBO. Former WBC super flyweight champion Roman ‘Chocolatio’ Gonzalez rose to popularity fighting on Golovkin’s undercards on HBO. Now that Gonzalez appears to be a shot fighter after making a disastrous decision to move up to the 115 pound weight class, the division has failed to fight a replacement for him in terms of popular. Gonzalez’s conqueror Srisaket Sor Rungvisai from Thailand isn’t a huge name for HBO, and Juan Francisco Estrada failed to distinguish himself in losing to Rungvisai in their recent fight last February. Estrada ran most of the fight against Rungvisai. In Estrada’s last fight on HBO, he beat a no name fighter in Felipe Orucuta by a one-sided 12 round decision that was dull to watch due to it being a mismatch.