Canelo to use same glove brand as first fight with GGG 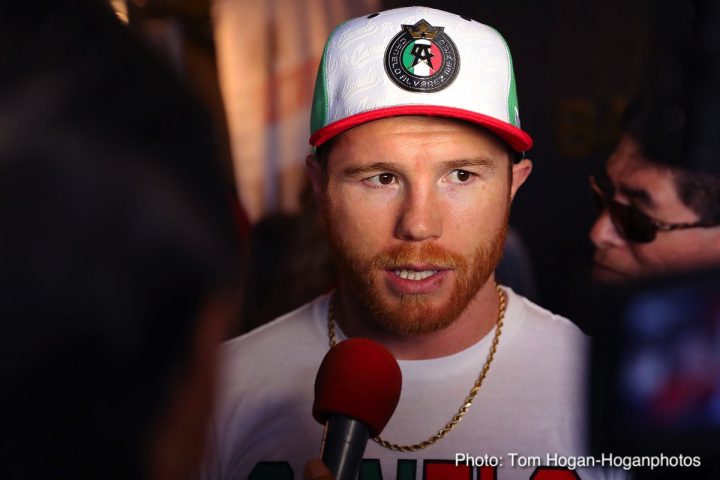 By Allan Fox: Saul Canelo Alvarez won’t be using the No Boxing No Life glove brand for the rematch with Gennady Golovkin. Those gloves were objected to by Golovkin’s trainer Abel Sanchez due to them never having been used in a world title fight.

Canelo will instead be using the ‘Winning’ gloves that he wore for his previous fight with GGG last September, according to ESPN Deportes. Canelo didn’t win the fight, so it didn’t matter. Sanchez was not on board with Canelo using the ‘No Boxing No Life’ gloves for the rematch with GGG. Sanchez also isn’t happy about Canelo’s trainer’s method of wrapping his gloves, which he calls, ‘stacking.’

Sanchez says this method of wrapping gloves, which involving placing tape over tape, is illegal in other states in the U.S, and that it creates a cast out of a fighter’s hands. Sanchez he won’t wrap Golovkin’s hands in this manner even though it’s legal in Nevada.

For his part, Golovkin will be wearing the same glove brand [Grant’ as he did for the first fight with Canelo. Golovkin, 36, felt that he won the fight by four rounds over Alvarez, so he doesn’t see any point in switching his gloves out. The gloves worked or GGG well last time he fought Canelo. There were no glove repairs during the time, and they held up well throughout the 12 round match.

The Canelo-GGG fight last year was ruled a draw, but Canelo did luck out in the respect that wasn’t given a loss because the boxing world saw him losing. However, the ‘winning’ gloves that Canelo wore for the fight had nothing to do with that. It was more of a case that two of judges that were assigned to the Canelo vs. GGG fight by the Nevada State Athletic Commission saw the match entirely different from the majority of the boxing world. In doing so, they made themselves look bad in the eyes of a lot of fans. That’s why it’s vitally important that the set of three judges assigned to the Canelo vs. Golovkin 2 rematch next Saturday get it right by scoring the fight in a way that the boxing public as a whole agree with rather than tiny minority of fans. Almost no fans saw the fight as a draw.

As it is, the venue will be the same as last time with the fight taking place at the T-Mobile Arena in Las Vegas, Nevada next Saturday night on September 15. The Nevada State Athletic Commission is aware of the ‘Winning’ gloves that the 28-year-old Canelo (49-1-2, 34 KOs) will be using on September 15 in his rematch against IBO/WBA/WBC middleweight champion Golovkin (38-0-1, 34 KOs) in Las Vegas, Nevada.