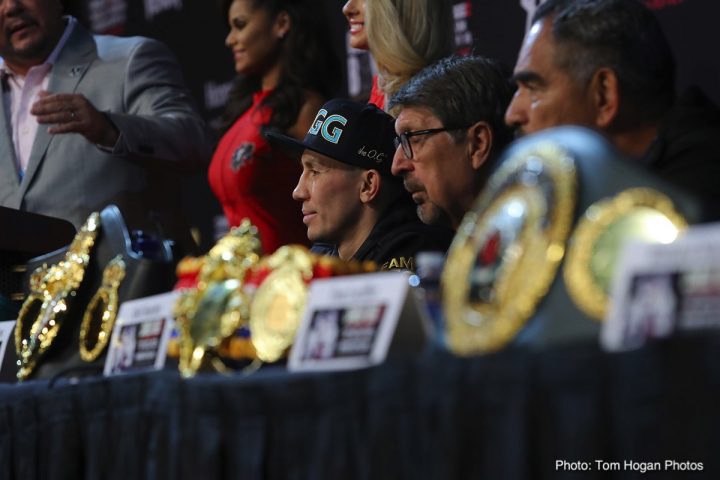 By Mike Smith: Teddy Atlas says he sees Gennady Golovkin as a fighter that has always been one dimensional and overrated in his mind, but he still thinks he deserved the victory over Saul Canelo Alvarez last September. Atlas says Golovkin should have done more to take the fight to Canelo (49-1-2, 34 KOs) last year by being aggressive and staying close to the Mexican fighter so that he could land shots.

Atlas views Golovkin’s decision not to go after Canelo to fight aggressively was a failure on both he and his trainer Abel Sanchez’s part. Atlas was disappointed by both of them.

“You got rid of the one judge that had it 118-110,” Teddy Atlas said to ESPN’s First Take about judge Adalaide Byrd, who scored the first Canelo-GGG fight 10 rounds to 2 in favor of Canelo. “That was horrendous. There’s no explaining that other than incompetence or corruption. They got rid of here, but you never know in boxing,” Atlas said.

Despite Golovkin playing it safe for most of the fight and failing to go after Canelo, he still did enough to deserve the win in the eyes of the boxing media and the fans. Canelo failed to do enough to deserve the victory. If not for the odd scoring by judges Adalaide Byrd and Don Trella, Golovkin would have won the fight despite not fighting aggressively in the way that Atlas felt that he should have.

Scoring the first Canelo-GGG fight 6-6 is giving Canelo arguably more credit than he deserves in the first three and last three rounds.

”I’d like to see if he scorecard was made out before the fight,” Atlas said about Byrd’ scorecard in favor of Canelo. ”GGG let him off the hook too many times when he had him against the ropes. He let off the gas. Earlier in the fight, Canelo was just trying to survive. It was the first time that Canelo stepped it up against that type of class. Canelo wasn’t sure he really belonged. It took him rounds to find out, rounds where he survived. He didn’t try to win. So early on, he wasn’t counter punching. There was no reason for Golovkin not to stay inside. Even if he [Canelo] countered, move your damn head. He should have realized that he wasn’t being countered early on. His corner should have realized that. That’s what corners are for. He should have said, ‘you get countered, you take a chance to get close so you can have the advantage of being the bigger guy against the smaller guy. You take the risk of getting in there.’ I’m going to say it right now. Golovkin is overrated. I think he’s an aggressive fighter that people love to watch. He’s fan friendly. He’s strong and all those things,” Atlas said.

You’ve got to blame Golovkin’s trainer Abel Sanchez for failing to put some heat under his backside to have him go after Canelo in the way that he needed to for him to win the fight. Sanchez was too content with what Golovkin was doing in the fight to instruct him to go after the Mexican fighter to shoot for a knockout. Sanchez failed to understand that Golovkin came into the fight as the B-side opponent against a superstar that was fighting in a city where he always fights and where he brings in huge money. Sanchez should have had Golovkin mentally prepared for what he was stepping into by facing Canelo at the T-Mobile Arena in Las Vegas, Nevada. Sanchez’s decision to let Golovkin fight on the outside throwing jabs all night long was a blunder of the highest order, because it cost him the fight. A good trainer would have told GGG that he needed a knockout in the fight for him to win, because he was in the wrong venue against a guy that isn’t beatable by a decision.

”Canelo held his own against a guy that was storming his way through the middleweight division,” Kellerman said.

”He fought Daniel Jacobs and a lot of people thought he lost,” Atlas said about Golovkin. ”He’s overrated. He’s one-dimensional.”

Golovkin beat Daniel Jacobs in 2017, but he made it a tougher fight than it should have been by giving him too much respect. Had Golovkin gone after Jacobs in the way that Dmitry Pirog did, he would have stopped him. Golovkin knocked Jacobs down in the 4th round, but then he backed off and fought passively for the remainder of the fight. That was a mistake on GGG’s part. Golovkin made the same mistake against Canelo by failing to fight aggressively.

“I think there’s more to lose for Canelo because he has to redeem himself to the great Mexican fans, because they smell out frauds. They demand that their heroes are real,” Kellerman said.

There is more to lose for Canelo in this fight. He’s a lot younger than Golovkin is at 28, and he already is perceived as he loser of the first fight. The boxing fans think Canelo was given a gift draw because of his popularity not because of what he did in the fight. What hurt Canelo’s career even more was his two positive tests for clenbuterol. A lot of the boxing fans feel that Canelo is not only a pampered fighter, but also a drug cheat. It’s on Canelo to show that he’s for real by beating Golovkin in the rematch. If Canelo can’t do that, then his career is going to take a nosedive. It only gets worse for Canelo after this, because he would be expected to face guys like Jermall Charlo, Billy Joe Saunders, Demetrius Andrade, Sergiy Derevyanchenko and Daniel Jacobs. Canelo is too young to avoid those fighters for long. If Golovkin gives Canelo a really bad beating, then his career is going to be really hurt and it’s going to be even worse for him.