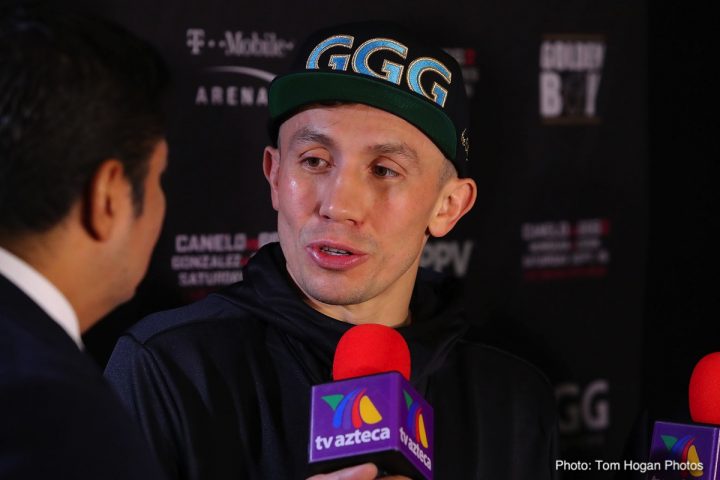 By Sean Jones: Trainer Freddie Roach believes that Gennady ‘GGG’ Golovkin can only win on Saturday if he can keep up with the younger, faster 28-year-old Saul Canelo Alvarez in their rematch at the T-Mobile Arena in Las Vegas, Nevada.

Roach observed from the first fight that Golovkin was unable to land his right hand power shots against the faster Canelo because of the speed of the Mexican fighter, both of hand and foot. Roach isn’t sure why Golovkin struggled so badly in the fight.

Roach thinks it could be a combination of age and the high altitude training from the 36-year-old GGG. Roach has an untested theory that fighters that train at high altitude aren’t helping themselves unless they come back down to sea level for the second part of each. Again, it’s just a theory of Roach’s, as Golovkin had always had great success training at high altitude at Big Bear, California until recently.

“If he’s capable of keeping up with him [Canelo], then that’s the key; he’s got to keep up with him,” Roach said to Fighthub in saying what the key ingredient is for Golovkin to beat Canelo. ”In the last fight, he was one step behind. That’s why he couldn’t land his right hand, because he was one step behind. He couldn’t keep up with the young man’s speed, and I feel that could be age or it could be the altitude training or it could be him slowing down and getting older. The thing is he needs to do that to win the fight,” Roach said.

Roach sounds like he didn’t watch the Canelo vs. GGG first fight from last year, because his memory of that fight is foggy at best. It isn’t Golovkin that needs to keep up with Canelo. It’s the other way around. Canelo is the one that gassed out in that fight. The whole idea of Canelo decreasing his muscle size was for him to fix his stamina problem that surfaced from the first GGG fight. The problem is Canelo was gassing out even when he was leaner earlier in his career, so it’s unlikely that he’s going to be able to fix his poor stamina. This is a problem that Canelo will always have.

In looking at the first fight, the obvious reason why Golovkin wasn’t able to land his power shots against Canelo is because he was standing on the outside far away from him. Any fighter would have great difficulty landing their power shots if they stood as far away from Canelo as GGG did last September. By staying on the outside instead of at close to medium distance, Golovkin allowed Canelo to move to his left the entire fight to escape his pressure.

Had Golovkin stayed close to Canelo, he would have been able to easily move to his right to keep the 28-year-old Mexican fighter in front of him the entire time. Canelo would have been forced to fight Golovkin for the full three minutes of each round instead of being able to pick and choose when he wanted to mix it up with him. Golovkin fought a poor fight by fighting Canelo at a distance. It was the same style that Golovkin used in his fights with Daniel Jacobs and David Lemieux. It worked for Golovkin to fight the 5’9’ David Lemieux on the outside in their fight in 2015, but I didn’t work for him against the 6’0” Jacobs and Canelo.

”If GGG can’t get there and land the right hand clean like he normally does, he does not knock him out. That’s his big knockout punch [the right hand],” Roach said.

Golovkin can keep Canelo in front of him the entire fight on Saturday, but it’ll come at a cost by needing to stay in close proximity. Canelo being a counter puncher with good power and excellent hand speed, Golovkin is going to get hit a lot of he fights Canelo at close range. Liam Smith had success against Canelo in the first four rounds of their fight in 2016. Smith was able to land a lot of shots on Canelo, and he had

him looking vulnerable. Where Smith’s game plan fell apart was when he faded in the 5th. If Golovkin can continue to fight hard and do well at close range, then he has a good chance of winning the match this time.

”I don’t think so,” Roach said when asked if he believes the Canelo vs. GGG2 fight goes 12 rounds.

Golovkin has a chance of scoring a knockout in this fight, but not Canelo. What will keep Canelo from scoring a knockout is it’ll take a lot of punches for him to hurt Golovkin and stop him, and he’s not shown the ability to throw a lot of consecutive punches in his career without gassing. Even against average fighters like Ryan Rhodes, Canelo really labored to throw enough punches to knock him out in the 12th round. Canelo was only 21-years-old in the 2011 when he fought Rhodes, but even then he was gassing out from throwing a handful of punches in the 12th round in the process of stopping him.

To knockout Golovkin, Canelo is going to need to throw nonstop punches for a prolonged period of time, and he’s not capable of doing that. It’s also a risky thing for Canelo to do because if he gasses out against GGG, he’s going to be at his mercy for the remainder of the round. Canelo doesn’t recover quickly after he gasses out. Golovkin and his trainer Abel Sanchez have had a lot of time to study the first fight with Canelo and they now realize how vulnerable the Golden Boy star is when being pressured. You can expect that Golovkin is going to be on the attack mode in a much more severe manner in the rematch on Saturday night because he knows that the Mexican fighter can’t take the pressure from him. Canelo has gassed out in every fight he’s had when facing pressure fighters. The only fights that Canelo doesn’t gas out is when he’s fighting guys that have no business being sinde the ring with him like Julio Cesar Chavez Jr., Alfredo Angulo, Josesito Lopez, Amir Khan, Kermit Cintron and Alfonso Gomez.