Fury vs. Wilder: Why the timing is perfect for both men to collide – The view from the Fury side 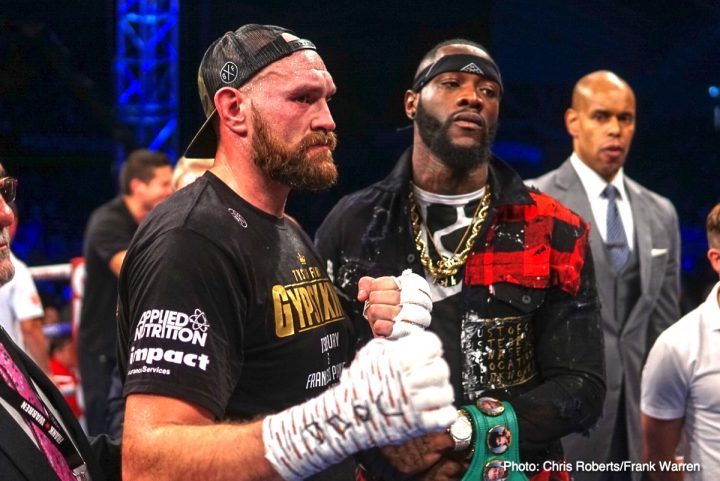 By Johnathan Rashman: The much anticipated fight all boxing fans want to feast their eyes on finally got announced last Saturday night. TYSON FURY vs. DEONTAY WILDER is on!

Tyson Fury (27 wins – 19 KO’s – 0 Losses) is one of boxing’s most colourful and enigmatic characters. The former (WBO, WBA, IBF, IBO & Ring Magazine Champion) really does divide opinion amongst boxing fans. I believe Tyson fury is one of boxing’s most underrated fighters. I have never seen a 6ft 9 – 18 stone human being glide around a boxing ring with effortless agility combined with such balance and equanimity. The only heavyweights I can think off with these attributes are Mike Tyson and the great Muhammad Ali, bearing in mind these boxing legends were a lot smaller and weighed 3 or 4 stone lighter.

The general consensus from the boxing world is that Fury needs another 12 to 16 months to sharpen his tools to have a realistic shot at dethroning WBC kingpin Deontay Wilder (40 wins – 39 KO’S- 0 losses). Although this may be correct, I still feel this could possibly be a perfect time for Fury to accept this challenge.

As I referenced in my first article on this fight, we all know the demons Tyson fury has had to conquer since defeating (WBO, WBA, IBF & IBO) long term heavyweight champion Wladamir Klitschko. The shape Fury has whipped himself into under the guidance of new head trainer Ben Davidson is nothing short of miraculous. Last weekend’s 10 rounder in Belfast was a massive improvement on the Fury comeback trail compared to the circus off his first fight back against the undersized Sefer Seferi (23 wins- 21 KO’S – 2 losses ). Fury dusted off some of the cobwebs, showed his timing, footwork and glimpses of his former self. Did he show enough to convince the boxing public he’s ready for an elite matchup? Probably not, however he is not fighting a technically gifted boxer in the form of Wilder. He is fighting a Champion with dynamite in his hands but lacks any high level boxing ability. Wilder throws his shots very erratically almost at times like a complete novice. This style is handmade for Tyson Fury, even at 60 % of his full capacity, he has the tools to frustrate and run rings around Wilder. This fight would mark the first occasion Wilder has faced an opponent with the ring general ship and boxing IQ Fury processes, yes he faced a highly skilled Luis Ortiz (29 wins- 25 KO’S – 1 loss) which he went life and death with, and was on the brink of being stopped. Although Ortiz is a master boxer, he is also very flat footed and does not have the agility and latterly movement Fury has.

Strike when the Iron is hot springs to my mind when this blockbuster of a fight was officially announced. How many times is a professional boxer likely to be offered millions of pounds and a shot at the prestigious WBC heavyweight belt? Fury could only have ever thought of this scenario in his wildest dreams when he was in the depths of dark depression. Boxing is a very unforgiving sport, the former world champion is only one cut, bad stoppage, injury & knockout away from being at the top of the sport to paling in to insignificance.

If Fury was to decline the Wilder fight and suffer a defeat to a far less superior fighter, which is a strong possibility in the heavyweight division .He can kiss goodbye to any lucrative fights and multi million pound fight offers. Much like Wilder should this gamble pay off for Fury it puts him in an almighty position at the negotiation table for a clash with (WBA, IBF & WBO) heavyweight leader Anthony Joshua, thus making the Fury vs Joshua clash not just the biggest heavyweight fight in recent history, but possible one of the biggest heavyweights fights of all time. After all should Fury take a loss to wilder (depending on the circumstances) he could always rebuild and possibly still take on Joshua as this fight will always be in the forefront of boxing fans minds especially in the United Kingdom.

Taking all this in to consideration I conclude that this may be a perfect time For Tyson Fury to take on Deontay Wilder. The positives far outweigh the negatives in my opinion. I believe the journey Tyson Fury has been on from the point of self destruction to climbing back in the Professional boxing ring is already an achievement that is far more mammoth than any belt can represent.

Boxing » Deontay Wilder » Fury vs. Wilder: Why the timing is perfect for both men to collide – The view from the Fury side