By Scott Gilfoid: Tyson Fury weighed in at 258 pounds on Friday at his weigh-in for his 2nd fight of his comeback on Saturday night against Francesco Pianeta at Windsor Park in Belfast, Northern Ireland. The 258 that Fury weighed in is approximately 100 pounds lighter than the 350 pounds that he was said to have been walking around at during his two and half years out of the ring. Granted, that was Fury at his heaviest.

It took Fury awhile to bloat up to 350lbs from too much rich food and drink. Fury weighed 247 pounds for his fight against Wladimir Klitschko in 2015. He’s now 11 pounds away from that weight. One more camp and Fury will be back at 247 pounds. That’s obviously the weight that Fury needs to be in for him to have a chance against the 210 pound Deontay Wilder. If Fury is still lugging around a lot of fat by the time he faces Wilder, he’s not going to last long against the talented 6’7” American knockout artist. Fury needs to be at least in the mid-240s for him to deal with the speed of Deontay. 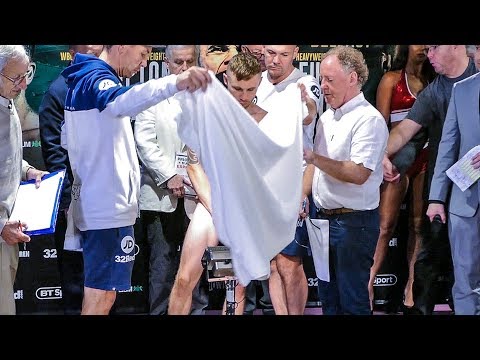 Fury has hogged all the attention from interim WBO featherweight champion Carl Frampton, who is defending his title against Luke Jackson in the main event on Saturday. Next to no one is talking about Frampton’s fight against Jackson. One reason for that, besides Fury having arguably so much more charisma than Frampton, is the Frampton-Jackson fighting being perceived as a terrible mismatch. Frampton didn’t help himself in choosing to face Jackson rather than a talented contender like Scott Quigg, Kid Galahad, Genesis Servania or Abner Mares. Frampton is totally unneeded for this card. If Frampton wasn’t fighting at all on the card, I don’t think he would be missed by the boxing fans, because they seem to be mainly interested in Fury, who in the past has said that he’s Irish. In this promotion, Frampton has been totally forgotten by the boxing fans. The focus has been on Tyson Fury and WBC heavyweight champion Deontay Wilder. The two of them are expected to fight in November.

The fans are already chomping at the bit looking forward to seeing that fight. Wilder showed at Friday’s weigh-in and created a big distraction by arguing with Fury’s father John Fury and shouting, “Bomb squad” to his many boxing fans. In hindsight, the creators of the card should have flipped things around and put Fury vs. Pianeta in the main event and Frampton vs. Jackson in the co-main event. That would have made a heck of a lot more sense. 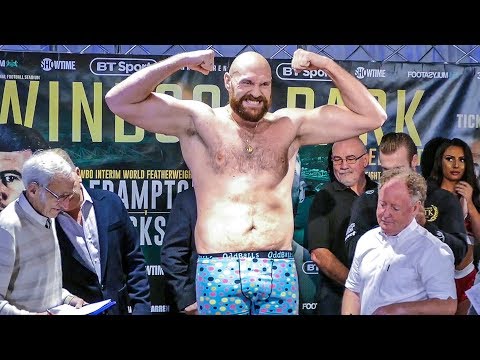