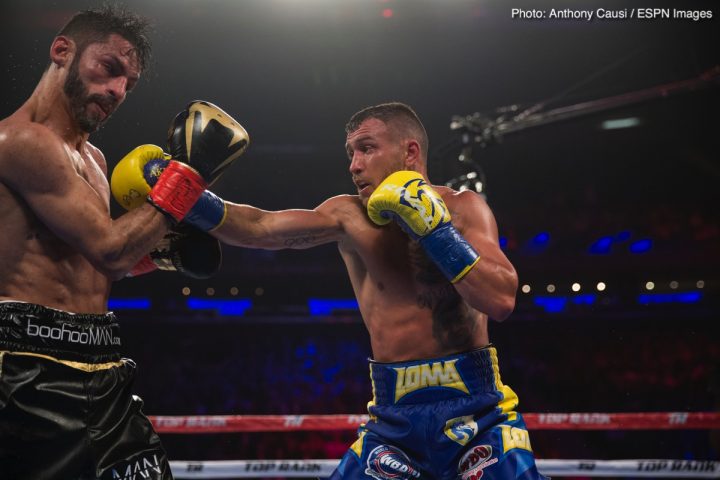 By Chris Williams: WBA lightweight champion Vasyl Lomachenko (11-1, 9 KOs) plans on returning to the ring on December 1 to face the winner of the August 25 fight between the Top Rank promoted WBO champion Raymundo Beltran (35-7-1, 21 KOs) and Jose Pedraza (24-1, 12 KOs). Lomachenkos fight against the winner of the Beltran vs. Petraza fight will be streamed on ESPN+ on Top Rank Boxing on December 1.

Lomachenko’s promoter Bob Arum of Top Rank is having him comeback from his shoulder injury against a fairly tough fight in facing the winner of Beltran vs. Pedraza. Those are not the type of fighters that one would think of facing in a tune-up, but Lomachenko is a special fighter. Pedraza was beaten easily by Gervonta Davis

Lomachenko, 30, is coming off of shoulder surgery on his right shoulder to repair an injury he suffered in his 10th round knockout victory over WBA lightweight champion Jorge Linares on May 12. Lomachenko tore his right labrum in his shoulder in victory after his shoulder popped out of the socket.

“As far as the future, I just hung up [the phone] with [Top Rank promoter] Bob Arum and the plan is [Raymundo] Beltran is fighting [Jose] Pedraza on Aug. 25 and the winner [is] gonna be unifying titles with Lomachenko on Dec. 1,” Lomachenko’s manager Eglis Klimas said to ESPN.com.

Lomachenko facing the winner of the Beltran vs. Pedraza fight isn’t going to interest boxing fans, especially if the fight is streamed on ESPN+, a $5 per month subscription service. It would be better for Top Rank to put that fight on regular ESPN because it would be too much of a low level fight due to Pedraza and Beltran not having a huge fan base. In order to keep building Lomachenko’s brand, Top Rank should have his fights shown on regular ESPN so that the masses can see his fights instead of just the hardcore boxing fans that are willing to shell out to see his fights.

The 37-year-old Beltran will be making his first defense of his World Boxing Organization lightweight title against former super featherweight champion Pedraza (24-1, 12 KOs) in a headliner on regular ESPN on August 25 at the Gila River Arena in Glendale, Arizona. The WBO made it easy for Beltran to capture their WBO title by sanctioning a fight between him and 39-year-old Paulus Moses for their vacant WBO lightweight title last February. Moses had done zero to be fighting for the vacant WBO title. Beltran facig Moses for the WBO made it easy for the aging fighter to win a world title. Had the WBO insisted on Beltran facing a good fighter like Ryan Martin, he likely would have lost and ended up back in the pack.

The fight that Beltran and Top Rank wants is a unification against IBF/WBC lightweight champion Mikey Garcia. However, with Mikey’s fights being televised on Showtime and Lomachenko’s on ESPN, it will be extremely difficult to make a fight between them. Moreover, Mikey used to be promoted by Top Rank, and that makes it even more difficult to put a fight together between him and Lomachenko. Mikey isn’t going to agree to the B-side in the negotiations with Lomachenko, which will ultimately keep the fight from being made while the two of them are still in their primes. More than likely the boxing public will need to wait until Lomachenko and Mikey are shot fighters before they face each other. We saw that with the Manny Pacquiao vs. Floyd Mayweather Jr. fight. Both were old by the time the fight was finally made.