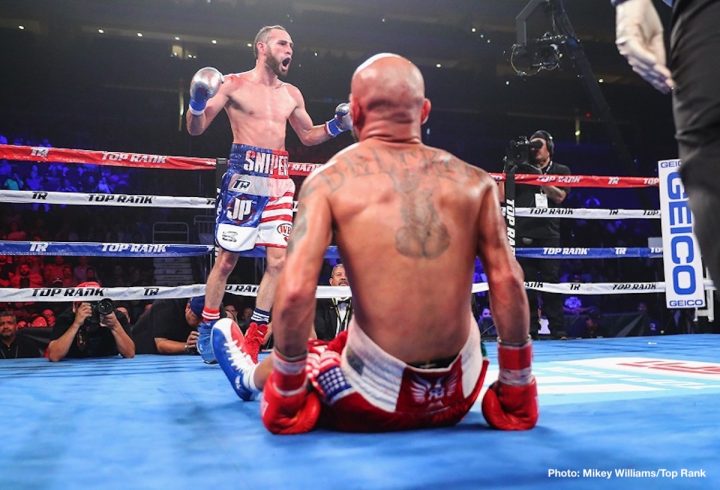 By Jim Dower: Jose Pedraza made WBO lightweight champion Raymundo Beltran look his age in defeating him by a one-sided 12 round unanimous decision on Saturday night to dethrone him in their fight at the Gila River Arena in Glendale, Arizona.

The younger 29-year-old Pedraza put on a boxing clinic in jabbing and picking off the older, slower 37-year-old Beltran. In the 11th, Pedraza dropped Beltran with a big left uppercut. Pedraza continued to belt Beltran around the ring in the final seconds of the 11th. It was lucky for Beltran that he wasn’t hurt earlier in the round because he likely wouldn’t have made it through the round. Beltran suffered a cut early on and he was never able to fight at a high level due to his cut and his slower hand speed.

The judges scored it in Pedraza’s favor by the scores 114-112, 117-110 and 117-110. Boxing News 24 scored it for Pedraza by a 117-110 score. Beltran didn’t do nearly enough to win the fight. Even the rounds Beltran did win were close ones that could have easily have gone the other way. Pedraza’s boxing skills was the difference in the fight, as he was just too slick and clever for Beltran.

With the win on Saturday night, Pedraza will be the one who will be facing World Boxing Association lightweight champion Vasyl Lomachenko later this year in December once the Ukrainian fighter comes back from his shoulder injury he suffered in his last fight against former WBA lightweight champion Jorge Linares. Pedraza will do a better job against Lomachenko than Beltran would have. That much is obvious. Beltran would have had a hard time making it out of the first round against Lomo due to his slow hand speed and movement.

Beltran was dominated in the first five rounds by Pedraza, but he did slightly belter in the second half of the fight. I don’t think you can say that Beltran did a lot better in the last six rounds, but he was slightly better. In the championship rounds, Pedraza poured it on in taking the fight to Beltran and battering him around the ring.

Coming into the fight, Beltran was the favorite to win. The odds-makers might not have been too familiar with Pedraza to understand what a good boxer he is. Pedraza had previously held the IBF super featherweight title. He lost his IBF super featherweight title belt in losing to Gervonta Davis by a 7th round knockout last year in July. There’s no shame in losing to a fighter as good as Gervonta.

The loss for Beltran ends his short title reign after just one fight. Beltran won his WBO title last February in defeating 40-year-old Paulus Moses by a 12 round unanimous decision. Beltran didn’t look good, but he had a beatable opponent for him to defeat.