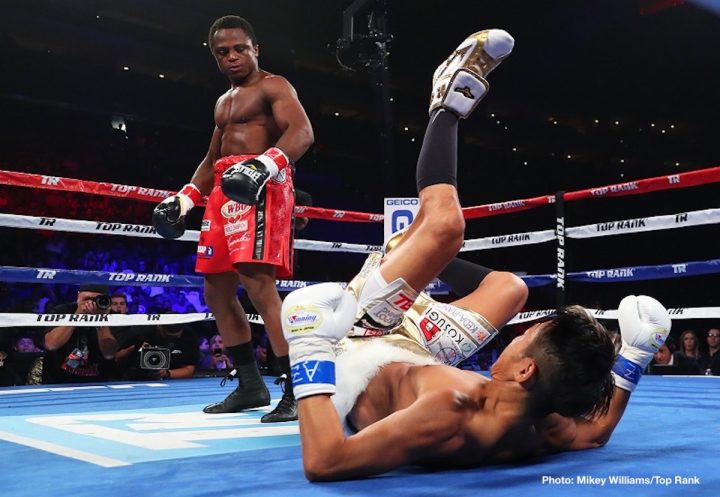 Dogboe knocked the aging Otake down twice, and then battered him until referee Patrick Morley was forced to intervene to stop the slaughter. Otake looked like a drunken sailor after he was knocked down for the second time. Dogboe, 23, was hitting Otake with huge shots, shaking him to his boots with each shot. The official time of the stoppage was at 2:18.

Otake made the mistake of standing in front of the younger, stronger and faster Dogboe. That was the first mistake. The second mistake Otake made was trying to slug with him, and that wasn’t going to happen. Dogboe teed off on Otake, knocking him down with a monstrous right hand to the head. Moments later, Dogboe hurt Otake with another big shot that caused him to put his glove down on the canvas to try and keep from going down. It didn’t matter.

The referee called it a knockdown anyway and gave him a count. The referee had to stop the contest seconds later because Dogboe had turned Otake into a human Pinada and he was teeing off on the hapless aging Japanese fighter. The guy didn’t belong inside the same ring with Dogboe, and that was clear the moment the contract was signed for the mismatch. It was bad to watch. Otake had been trounced by Scott Quigg by a one-sided 12 round unanimous decision four years ago in 2014. Since that fight, Otake had been padding his record against C-level opposition in beating fighters with atrocious records of 0-2, 2-4, 0-1, 9-8, and 5-0. For a highly ranked fighter like Otake to be facing fighters with records like that, it just looks bad like he was just padding his record.

Otake was going to get smashed anyway. Even if he hadn’t been so badly hurt by a big right hand early in the 1st, he was going to get knocked out quickly because he was standing stationary and just covering up. Otake’s trainers should have watched Dogboe’s previous fights and learned that he destroys fighters that stand in front of him.

In other boxing results on tonight’s card on ESPN: