Jim Gray: Golovkin will have to knockout Canelo to win

By Jim Dower: Showtime interviewer Jim Gray says Gennady Golovkin should have been given a victory in his first fight against Saul Canelo Alvarez last September, and he believes the only way he can beat the popular Golden Boy star is if he knocks him out in their rematch on September 15.

Gray is picking Canelo to win the fight because he doesn’t think GGG has any chance of knocking him out. Gray didn’t say whether he thinks Canelo is too big physically or too big of a cash cow money fighter for Nevada and the sport of boxing as a whole to be beaten by decision. If Canelo can’t be beaten by decision due to his popularity, then Golovkin is going to be in a tough spot on September 15.

What Gray isn’t factoring in for the rematch is Canelo’s lost size. He appears to have lost A LOT of size recently. It’s unclear why Canelo has lost the size, but definitely looks smaller. Without the bulk that Canelo had for his fight against Triple G last September, the rematch could be a much different story this time around.

Canelo won’t have the bodybuilder muscles and size that he had in the first fight, and that’s got to hurt him because he appeared to be punching harder than ever due to the extra weight he was carrying around from his muscles. Canelo’s physique now looks badly atrophied, and that’s bad news for him. Canelo’s upper body has the appearance of someone who had stopped lifting weights all of a sudden and cut back on the calories. The question is Canelo beat Golovkin without all the muscles that he had in the previous fight? He didn’t win the fight obviously. All the muscles Canelo put on for the first fight helped him get a draw against GGG, but it didn’t help him win the fight because he came up empty.

Gray doesn’t think Golovkin can knockout the hulking Canelo due to his size advantage over GGG. Since Canelo wasn’t weighed in for his previous fight with Gennady last September, we have no idea how much heavier he was. Canelo did look heavier than Golovkin during the fight, but that’s not surprising because the Kazakhstan fighter tends to rehydrate to the low 170s. Some boxing fans believe Canelo rehydrates into the 180s for his fights at middleweight. Amir Khan went even as far as saying he believes Canelo was in the 190s for their fight in 2016. Canelo knocked Khan clean out in the 6th round with a single right hand to the head.

“I guess Canelo,” Jim Gray said to ES News Reporting when asked who will win the Canelo vs. Golovkin II rematch on September 15. ”He’s such a bigger guy. Golovkin won the first fight. They didn’t give it to him.”

If the 36-year-old Golovkin got old since his fight last year, then it’s possible Canelo can win the fight. Canelo had the speed advantage over GGG, and he was out-boxing him at times during the fight when he was countering him. Golovkin looked like he won the first fight, but it was close. Canelo did a good job of coming on in the last three rounds to make things interesting, but he still failed do enough to win because of his stamina problems. Golovkin was the older guy, but it was the younger 27-year-old Canelo who gassed out after the 2nd round and let Golovkin take rounds 3, 4, 5, 6, 7, 8, 9, 10 and 12.

”Obviously, it’s going to be a circumstances where the judges,” Gray said about his belief that Golovkin won’t be able to win a decision against Canelo. ”Golovkin will have to knock him out, and I just don’t think he can do that. He’s too big.”

It’s going to be hard for Golovkin to knockout Canelo because he moves his head a lot, and he’s good at countering. Golovkin will need to use the Aaron Pryor style of fighting for him to wear Caneli down and knock him out.

Golovkin’s trainer Abel Sanchez thinks Canelo lacks the courage to stand and fight GGG. Sanchez says Canelo didn’t fight to the level that the boxing fans and Golovkin wanted in their last fight. Canelo had promised to fight in a certain way, and he failed to do so.

”I got a little frustrated by the 5th and 6th rounds. I didn’t feel like Canelo was making a fight of it,” trainer Abel Sanchez said to Fighthype. ”When he [Golovkin] fought Willie Monroe, he kept telling Willie Monroe, ‘Come on, let’s give the fans [a great fight,’ and he thought Canelo was going to give a fight that he promised, to give the fans the fight they promised them. He was more frustrated than anything. He wants a fight. If Canelo was going to beat him then beat him, but try and beat him. That’s just the kind of sportsman he is. He wants to give his utmost inside, and if he’s not being supported in that way, then it’s difficult for him,” Sanchez said.

Both fighters are guilty of failing to fight in the style that would entertain the boxing fans. Canelo had said before the fight that he was going to fight in the Mexican style to entertain the boxing fans, but instead of doing that, he moved a lot. Golovkin said the same thing, and he failed to do what he said. When Canelo would move forward looking to exchange, Golovkin would back away and give ground. Golovkin failed to understand that Canelo was interested in making it a boxing match, not a war. Since that was Canelo’s intention, Golovkin should have looked to force him to fight the style that he wanted him to.

”Golovkin is going to be aggressive. He’s been aggressive in every one of his fights. It all depends on Canelo,” Sanchez said. If Canelo is truthful to what he’s saying and is a man of character and does what he says. I’m not saying he stands toe-to-toe. Just come to win. Come to throw punches. Come to knock Golovkin out like you say you’re going to, and if you do, you’re going to be at range to be able to do the things. Whatever you’re doing, he’s going to be able to do also. So let’s see who has better technique, better defense and better power. Let him [Canelo] throw combinations and we’ll fight the same way and hopefully he doesn’t get tired the same way, he’s going to get knocked out. I think it’s going to be a difficult fight for both guys. I think it’s going to be a difficult fight for the first five or six rounds. I think they’re going to go at each other, and once they go at each other, I think the fight will be difficult for both until that point for both. After that, I think Golovkin will start to pull away and will win either by an 11th or 12th round knockout or a decision by 8-4, 9-3,” Sanchez said. 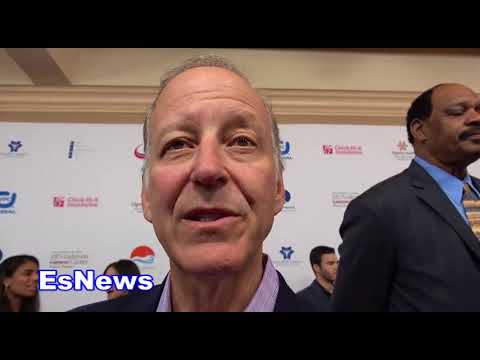 Oscar Valdez to be trained by Canelo’s coach Eddy Reynoso »