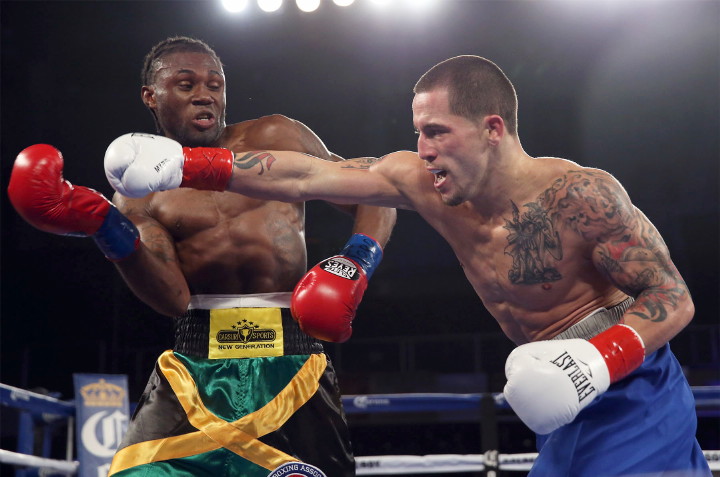 By Ian Aldous: This Saturday night, former WBA super-featherweight world champion, Jason Sosa (20-3-4) battles Reynaldo Blanco (14-4), in an eight-round bout as part of the undercard for Bryant Jennings vs. Alexander Dimitrenko, live on ESPN and ESPN Deportes (the undercard will stream live on ESPN+). Sosa is looking to bounce back from a bizarre points defeat to Yuriorkis Gamboa last November. As we enter fight week, the American of Puerto Rican descent took some time to talk with me over the phone about his career and future in the sport.

IA: Last November on HBO, we saw you battle Yuriorkis Gamboa in a bit of a ‘crossroads’ fight. Harold Lederman scored it 97-91 for you. Somehow, Gamboa walked away with a majority decision victory. What are your thoughts when you reflect back on the fight and how harshly treated did you feel after the scorecards were announced?

JS: You know what? It really didn’t bother me much. I mean, it did bother me because we know we did win, but at the end of the day – this is boxing. So much can happen in boxing when you leave it up to the judges. We always prepare ourselves for that. I was a little bit heartbroken just because we know that we dropped him, they took a point away from him and we pretty much did what we needed to do for the fight. (I’m) a little bit disappointed with my performance because I haven’t been focused for the past two years, so if he’d met the Jason Sosa of right now, then it would have been a whole different story.

IA: Was there any talk of a rematch?

JS: (I’m) Not sure about a rematch. My focus is to become world champion again and that’s what I’m looking for.

IA: On Saturday night, you’re facing Reynaldo Blanco. He’s obviously not expected to beat you, but what do you hope to take away from the fight?

JS: A good fight. At the end of the day, what we do is we fight for the fans. We’re preparing ourselves really well. I haven’t been as focused as this in two years. I’m very excited to get back in the ring. I’m just looking for a great performance.

IA: What’s it going to take going forward for you to get back into title contention?

JS: First and foremost we’ve got to focus on Saturday. I’m with Top Rank promotions and Russell Peltz promotions and I believe they can make something happen. It’s whatever they decide. It’s only been eight years for me in boxing (so far), so I’m just excited to be back, man.

IA: Your two best nights as a pro were outside of the U.S when you won the WBA 130lbs title in China against Javier Fortuna and then defended it in a slugfest against Stephen Smith in Monaco. Which of those do you feel was your very best performance?

JS: I believe they both were my best performances. I went all the way to China and I beat one of the top 130lb fighters. He’d just rated number one in the world at the time that I was fighting him and to go all the way to China to defeat a very highly-skilled Javier Fortuna and take his title away from him in China by TKO – that’s a beautiful story that I can tell for the rest of my life. Then to go France and fight a slugfest with Stephen Smith, I went there to defend my title and I think I did that very well. But, the Jason Sosa that is now – a lot of people are going to be excited.

IA: Following those fights, there was no shame in losing to Vasyl Lomachenko. What was it like facing one of the greatest boxers we’ve ever seen?

JS: It was an amazing experience. I was very excited that I got the opportunity to fight one of the big names that is eventually going to go down in history. To be in the same ring with him is great experience for me. I’m just happy for all the things that I’ve accomplished so far.

IA: Do you have any regrets in vacating your WBA title to take that fight with Lomachenko?

JS: No, I think us as a team we did the right decision. That’s not the only title, there’s so many more titles and so many more opportunities. We’re going to become world champion again – it’s just a matter of time. That was a ‘live and learn’ experience and I think if it comes down to another situation the same – we know how to handle it.

IA: I believe you only had three amateur fights? Do you think your career would have been much different if you’d had a longer education in the amateur game?

JS: You could say yes, you could say no. Who knows, maybe it was better off for me to only have three amateur fights and learn in the pros because they’re two different ball games. It might work for some people and I think it worked for me, in a way.

IA: I wanted to get your thoughts on Tevin Farmer going over to Australia and winning the IBF super-featherweight world championship. How proud were you of your close friend?

JS: He won the title – I won the title. He’s my brother and I’m so happy for him. He went through so much to have that opportunity and put himself in the history books. We all believe that he won it the first-time (against Kenichi Ogawa) and somehow, some way, it went to the other guy.

IA: That was even more of a disgrace than your fight with Gamboa.

JS: Right. For him to go all the way to Australia and take what was his in the first place is a beautiful story, man. I was very excited for him to come back with that title.

IA: Who works harder in the gym out of you two (laughs).

JS: (laughs) We’re a team. He pushes me, I push him. We just are really, really, really dedicated to this sport and we really show it every day in the gym.

IA: Possibly next for him will be Gervonta Davis. What do you predict if that fight happens?

JS: I like the hype for it. They’re building for a mega-fight, I believe. A lot of people do want to see it. I just want him to make the right decisions and the right moves in boxing. Boxing’s not how it used to be, the best fought the best, number one fought number two – it’s not like that anymore. Now it’s just like, moving the right way to make as much money as you can, so you can leave the sport. We’re not here to do this for the rest of our lives. We’re here to be smart with the money that we can make.

IA: Finally, what can we expect from Jason Sosa in the future?

JS: To be back up top, man. My mind says right now that I really want to just go out there and give everything I have left. I’m looking for another seven years in the sport, (due to) the way that I take care of my body and now at thirty, I’m living more of an athlete’s life than I used to before. I’m just very hungry and excited to be back.

Bryant Jennings vs. Alexander Dimitrenko and Jesse Hart vs. Mike Gavronski will be televised LIVE on ESPN and ESPN Deportes at 10 p.m. ET, and all undercard bouts will be streamed on ESPN+ beginning at 7 p.m. ET.