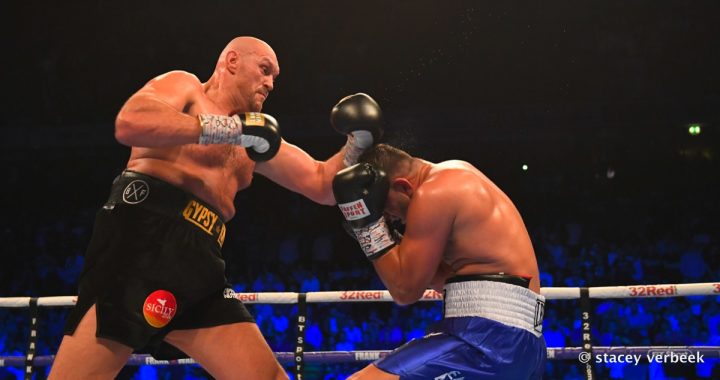 By Jeff Aranow: Tyson Fury says he’ll fight WBC heavyweight champion Deontay Wilder after he takes care of business against Francesco Pianeta on August 18. Fury states that Anthony Joshua has made the Brits look bad for turning down the fight against Wilder for September and looking like he’s running scared.

Fury, 29, wants to show that he’s not scared to go to America and fight the unbeaten Wilder (40-0, 39 KOs). Joshua turned down a $50 million offer from Wilder’s management to come to the U.S to face him. That move made Joshua (21-0, 20 KOs) look really bad in the eyes of the boxing public. Joshua’s promoter Eddie Hearn then turned around and made Wilder a flat fee offer of $15 million, which many fans feel was never meant to be a serious one.

Fury has an opportunity to make Joshua look incredibly bad if he takes the fight with Wilder in the U.S, and defeats him. It would be the second time in Fury’s career in which he traveled to another high level fighter’s home country to defeat them in front of their own fans. Three years ago, Fury beat former heavyweight champion Wladimir Klitschko by a 12 round unanimous decision in front of his German boxing fans. It was a career best win for Fury, who now wishes to do the same thing against the American Wilder.

“I’ll fight Deontay Wilder in America,” Fury said to BT Sport. ”I’ll fight Joshua in London. I’m not afraid to go abroad. I’ve been abroad before. I’ve been on the road. It is what it is. It takes someone like me to go over and beat someone, doesn’t it? At the minute the Americans are showing the Brits up rotten. The Brits are running away scared, and there’s only me.”

The only American fighter that seems to be getting avoided by a British fighter is Wilder. It’s unclear whether Joshua is afraid of Wilder or if it’s his promoter Eddie Hearn that is afraid to make the fight. It’s also possible that Hearn’s decision not to let Wilder fight Joshua in 2018 is motivated by a need to have a good fight between Joshua and Alexander Povetkin for the DAZN kickoff in September. Hearn has done precious little in terms of signing American fighters to place on his DAZN streaming service, which makes it necessary for him to use his most popular fighter in his stable Joshua as a tool to try and get U.S fans to subscribe to DAZN.

Fury (26-0, 19 KOs) needs to get the 6’5” Pianeta out of the way first before he can start talking about a fight with Wilder. Fury faces former two-time world title challenger Pianeta on August 18 on the undercard of Carl Frampton vs. Luke Jackson at the Windsor Park, in Belfast, Northern Ireland. The German based Pianeta lost to Klitschko and Ruslan Chagaev in two failed world title challenges in 2013 and 2015. Wladimir stopped Pianeta in the 6th round. Chagaev knocked Pianeta out I the 1st round in Germany. Pianeta was recently beaten by Kevin Johnson and Petar Milas.

”I can’t have him calling us over here [expletive],” Fury said. ”Everybody in American is saying, ‘Those British guys don’t really fight.’ I’ll go over to America and fight him and knock him the spark out. I can’t say any fairer than that,” Fury added.

It’s unclear what the overall reason is for Joshua’s reluctance to fight Wilder. It could be that he’s afraid of the 32-year-old American and is waiting for him to get old before he finally faces him. It also could be that Joshua and his promoter Hearn are so accustomed to getting their way in giving their opposition smaller money that they don’t feel they have to give Wilder what he feels he deserves, which is a 50-50 percentage deal. Fury doesn’t like the way that it makes Joshua look, and he wants to make sure he doesn’t make the same mistake by avoiding Wilder.

”When I get Francesco Pianeta out of the way, then I’ll come for Wilder, because Joshua is a s—t house,” Fury said. “I apologize for him, and Eddie Hearn, no balls. But I’m the man. I’ll fight you, no problem. You might have all the activity and all the motion, and you’re probably the favorite going in, but when I win again, what are they going to say?” Fury said.

It’s going to look bad if Fury follow up and take the fight with Wilder because he’s going to get a lot of fans’ hopes up by him saying that he wants to fight him next after Pianeta. Those same fans are going to think that Fury is afraid of the 6’7” Wilder just like Joshua is. If Fury isn’t serious about wanting to fight Wilder, he would be better off keeping quiet about it and letting the boxing public target Joshua with their anger for his avoidance of the Wilder fight. It’s probably too early for the 6’9” Fury to be taking a fight against Wilder, because he looked bad in his comeback fight against Sefer Seferi on June 9. Fury had problems with the shorter fighter, and he took some hard shots in the opening round. Although Fury did eventually stop Seferi in round 4, it wasn’t the type of performance that set the world on fire. Fury looked like a guy that lacks the talent to compete at the highest level of the heavyweight division.