Tony Bellew’s next fight down to three names: Fury, Stevenson or Ward 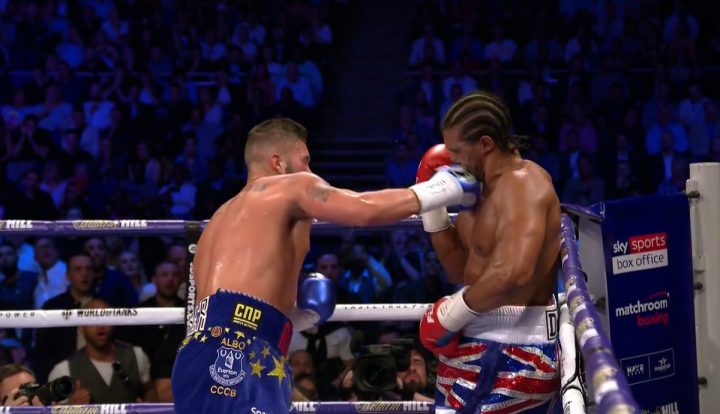 By Scott Gilfoid: Eddie Hearn has three names – Tyson Fury, Andre Ward or Adonis Stevenson – that he’ll be looking to select from for former WBC cruiserweight champion Tony Bellew’s next fight. Hearn doubts that the 35-year-old Bellew (30-2-1, 20 KOs) has much of a chance of getting a fight against former undisputed heavyweight champion Tyson Fury to face him anytime soon due to him still slowly working his way back after 2 ½ years of inactivity.

Bellew is going to need to make a decision soon if he wants to keep from having his boxing skills deteriorate further. Before his last fight against a badly depleted David Haye last May, Bellew had been out of the ring for 14 months, waiting for the Hayemaker to finish licking his wounds from their previous fight in March of 2017. Bellew has currently been sitting inactive since his victory over Haye last May, and he has nothing brewing for his next fight. Hearn has a three-fighter list that he’s interested in picking from for Bellew’s next fight, but the only guy with a realistic chance of taking the fight against him is Adonis Stevenson. Putting together a fight between Bellew and Ward could prove to be a useless waste of time.

Hearn wants Bellew to capitalize on the momentum he’s achieved with his recent two stoppage wins over former two division world champion David Haye. Bellew received a lot of attention in the UK after stopping the 37-year-old Haye (28-4, 26 KOs) in the 5th round in their rematch on May 5 at the O2 Arena in London, England. Bellew had previously stopped Haye in the 11th round in their first fight in March of 2017, but he didn’t receive full credit for the victory due to the Hayemaker suffering a ruptured Achilles in round 6. In the rematch 14 months later, Bellew was able to dominate a shot looking Haye in knocking him down twice in round three and once in round five.

Bellew would love the Fury fight, as it would give him a tremendous payday to feather his nest for his retirement years, but the fight isn’t happening yet. Hearn thinks that the retired Andre ‘SOG’ Ward can potentially be lured out of retirement to face Bellew if he receives a big enough offer. Adonis Stevenson, who easily knocked Bellew out in the 6th round in 2013, is perhaps the easiest fight for Hearn to make. The only thing that would need to be dealt with is the weight difference. Stevenson fights at light heavyweight. Bellew would need to drop down from heavyweight to face the 40-year-old Stevenson at a catch-weight.

Bellew has talked recently of wanting to fight the winner of this Saturday’s fight between cruiserweight champions Oleksandr Usyk and Murat Gassiev. Hearn doesn’t see that as a realistic option for Bellew, as Usyk and Gassiev aren’t big enough names for the fight to sell in the UK. Besides that, Bellew would have a hard time beating those two. Bellew would be a big underdog against Bellew and Usyk, and if he loses to one of them, he could forget about getting a big payday fight against Ward or Fury.

“I think there’s three fights for him,” Hearn said to skysports.com. “One is Tyson Fury, which isn’t going to happen any time soon. No 2 is Andre Ward, who is obviously retired, but I think would come back, and the other one who has reached out is Adonis Stevenson. Tony likes the idea of that, because he wants to do a job on him after being knocked out in Canada.”

It would be surprising if Bellew takes the fight with the southpaw Stevenson, because he was so badly dominated in their fight five years ago. That’s not a good match-up for Bellew, because he’s not fought any solid fighters since his loss to Stevenson. Bellew’s wins in the last five years have come against these fighters:

The one constant with Bellew’s opponents in the last 5 years is the fact that all of them were badly flawed in one way or another. Haye is easily the best of the bunch, but he was totally shot by the time Bellew fought him. It’s academic that Bellew would have stood no chance against Haye in his prime. Bellew did a good job of waiting for Haye to grow old before fighting him. At cruiserweight, Bellew never fought the top dogs in the division, and it’s pointless for him to go back down now and try and do what he should have done years ago. Bellew would likely be thrashed by Gassiev, Usyk, Yunier Dorticos, Mairis Briedis and Krzystof Glowacki.

Tyson Fury (26-0, 19 KKOs) is fighting next month on August 18 against former two-time heavyweight world title challenger Francesco Pianeta (35-4-1, 21 KOs) at Windsor Park in Belfast, Northern Ireland. Fury-Pianeta will be taking place on the Carl Frampton vs. Luke Jackson card. If Fury wins that fight, he’s expected to continue to fight softer heavyweights without a lot of punching power. Bellew will likely need to wait until 2019 or 2020 before he’ll get a chance of fighting Fury. It’s doubtful though that the fight will happen unless Bellew is willing to keep his career going fighting different guys while he waits for Fury to get the ring rust out. The problem with Bellew waiting on Fury is he’s going to be expected to stay active fighting the best opposition. There isn’t another shot David Haye for Bellew to fight to bring in a lot of pay-per-view buys on Sky Box Office in the UK. The British boxing fans are going to expect Bellew to fight good opposition for a change, and that’s where the problem is. If Bellew fights someone good like Usyk or Gassiev, he’ll likely lose badly to them. Gassiev might even hurt Bellew. That’s a bad fight for Bellew.

If Hearn is willing to give Andre Ward a huge money offer, he might decide to come out of retirement to face Bellew. I’m not sure that it would be a bigger fight than Bellew vs. the winner of the World Boxing Super Series cruiserweight tournament between Usyk and Gassiev. Ward has been out of the ring for a year now, and he’s likely been forgotten by a lot of fans in the UK. It would be better for Bellew to face Gassiev or Usyk. Even fighting the loser of that fight would be an appealing fight for the UK fans. At least if Bellew fights the Gassiev-Bellew winner, he can make an argument that he’s facing one of the best fighters in boxing.

It would be nice if Bellew was to try and fight a relevant guy from the cruiserweight or heavyweight divisions instead of pooling from retired, over-the-hill or ring rusty fighters. At this point, boxing fans would be more than pleased to see Bellew test himself against the likes of Yunier Dorticos, Adam Kownacki, Kubrat Pulev or Mairis Briedis. Of course, it would be great if Bellew were to fight Usyk or Gassiev, but Hearn obviously wants no part of matching him against those talents. Usyk and Gassiev are actually in their prime and aren’t shot fighters, which you can argue why he’s being ruled out by Hearn as a possible option for Bellew.