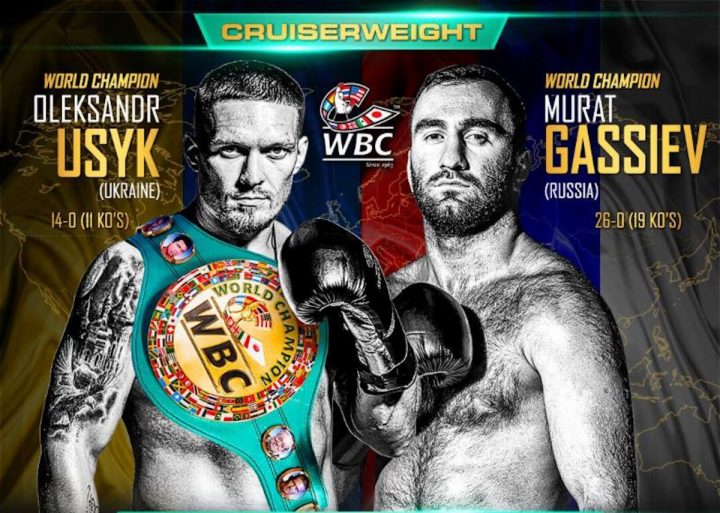 By Jeff Aranow: In a battle of unbeaten cruiserweight champions, IBF/WBA champ Murat Gassiev (26-0, 19 KOs) will be battling WBC/WBO champion Oleksandr Usyk (14-0, 11 KOs) this Saturday night in the World Boxing Super Series (WBSS) tournament at the Olimpiyskiy, in Moscow, Russia.

Gassiev’s trainer Abel Sanchez believes his fighter will stop the 31-year-old Usyk by the 9th round if he follows the game plan that he has for him in the fight. Sanchez saw some flaws in the 2012 Olympic gold medalist Usyk’s game from his last fight against former WBC champion Mairis Brieidis in the semifinals of the WBSS tournament earlier this year on January 27 in Riga, Latvia. Usyk struggled against the 33-year-old Briedis (23-1, 18 KOs) when he was being pressured. Although Usyk ultimately was able to win the fight by a 12 round majority decision, the only reason he won the fight was because Briedis gassed out. Had Briedis’ stamina held out, Usyk would have lost the fight. The flaws that Briedis exposed in Usyk’s game are the same ones that Artur Beterbiev and Joe Joyce both exposed in the past. Usyk doesn’t do well when he’s pressured consistently for three minutes of every round. Usyk wears down physically and loses his confidence. Usyk is a much better fighter when he’s the one dictating the pace and coming forward. 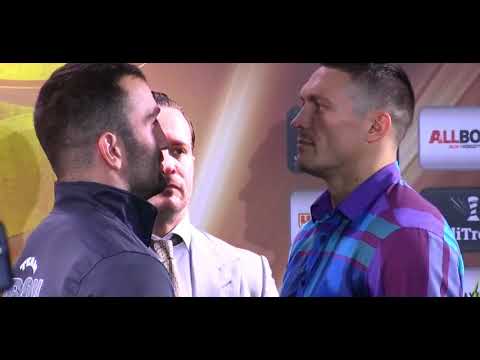 ”Usyk also allowed himself to be trapped and to be hit. If Usyk fights Murat the same way he fought Briedis he will be on his back before nine,” Sanchez said.

It’s going to take a lot of pressure from Gassiev to keep Usyk from being able to move around the ring, and jab his way to an ugly victory. Usyk is comfortable winning his fights by hitting and moving. That’s how he was able to win a gold medal in the 2012 Olympics despite not being a huge puncher. Usyk’s 17-13 win over Beterbiev in the competition was highly controversial. Beterbiev landed constantly on Usyk without the judges giving him points for his harder, cleaner landing shots.

The only two fights as a pro that Usyk struggled was against Michael Hunter in 2017 and Briedis. Both of hose fighters used a lot of pressure and high volume punching to give Usyk headaches. Hunter was getting the better of Usyk when he would stand and fight the American. Usyk finally gave up trying to punch with Hunter by the 6th round, and he spent the second half of the contest on the move, keeping out of range as much as possible. The boxing fans at ringside booed Usyk’s performance, as they wanted him to stand and fight Hunter. The fight took place at Oxon Hill in Maryland. The fans wanted to see action, but Usyk was thinking safety first, so he stayed on the move and disappointed the boxing fans at ringside and likely at home. There’s a very good chance that Usyk will fight in an identical fashion on Saturday night when he gets inside the ring with the big punching 24-year-old Gassiev, because he’s not going to be able to trade shots with the Russian fighter over the course of the 12 round fight without getting hurt and possibly stopped by him. Usyk is considered the best boxer in the cruiserweight division by many boxing fans, but he’s far from invincible. Usyk can be beat, especially now that he’s starting to age and slow down. He’s not the same guy that turned pro in 2013. Usyk is getting older, and like a lot of fighters that depend on their speed to win, he’s not as effective now that he’s beginning to slow. Unlike Gassiev, Usyk doesn’t have huge punching power to fall back on to dominate his opponents. Usyk is an average puncher. He’s nothing special in the power department. Usyk wins his fights with his legs and speed, not with his power. 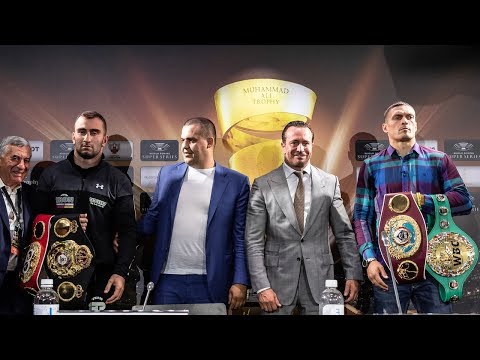 “Usyk got skills, he is a very good fighter,” said Sanchez in complimenting him. “(Yunier) Dorticos, Usyk, Briedis, any of those guys, they are all very physical themselves so we have to be more physical. And I feel that our exercises and system make us a little stronger, a little better, a little faster than most guys,” said Sanchez.

Sanchez is a great coach when it comes to training pressure fighters. Besides Gassiev, Sanchez also had middleweight champion Gennady Golovkin in his stable of fighters at Big Bear, California. Sanchez will likely have Gassiev putting a lot of pressure on Usyk from the 1st round rather than having him wait until the last four rounds of the fight to start putting him under duress. Gassiev let his last opponent Yunior Dorticos do the pressuring in the first nine rounds of their semifinals March in the World Boxing Super Series tournament on February 3 in Adler, Russia. Gassiev was trailing the fight going into the championship rounds. He was then able to come on in the last three rounds hurt Dorticos in the 11th and then stop him in the 12th. Gassiev will need to fight in an opposite manner against Usyk for him to win the fight. He can’t let Usyk amass a big deal in the first three fourths of the fight and then hope to knock him out in the last quarter of the fight. Usyk will run out the clock with his feet if he’s able to get ahead of Gassiev in the first eight rounds. Usyk is fine with making the fight boring as long as he wins.

“You can’t allow a fighter to be the one he wants to be and I believe Murat will be able to break Usyk down,” Sanchez said. ”Briedis allowed Usyk to move, allowed him to be first and when Briedis came close he was not effective.”

Briedis was more effective than Sanchez says. Usyk had a great deal of problems with Briedis in the middle rounds of the contest. Briedis’ problem was he let Usyk be first and dominate the rounds in the first and last quarter of the fight. Usyk used his feet to control rounds 1 through 4 and 9 through 12. Briedis got the better of Usyk in the middle of the fight, but then he faded and lost control in the crucial championship rounds.

The winner of the Usyk vs. Gassiev fight will possess all four of the cruiserweight titles in holding the IBF/WBA/WBC/ WBO belts. They’ll also hold the Ring Magazine cruiserweight title. If they stick around and defend the belts against all comers like Dorticos, Tony Bellew and Briedis, it would be great for the boxing fans. That’s not what Usyk and Gassiev plan on doing. They want to move up to heavyweight to go after the bigger money fights. Despite Usyk being viewed as the best fighter at cruiserweight, Gassiev figures to have a better chance of success at the heavyweight level due to his superior size and punching power. Gassiev has the power to hurt the top heavyweights. Usyk will need to try and out-box the top fighters in the heavyweight division, which won’t be easy for him to do because he’s going to be giving away a lot of size to the taller fighters like the 6’7” WBC champion Deontay Wilder and the 6’6” IBF/WBA/WBO champion Anthony Joshua.

”How Usyk fought Briedis doesn’t mean he will fight Murat the same way,” Sanchez said. ”What you look for though is tendencies of what he likes to do and what he does after certain combinations. We have prepared Murat to be Murat and now Usyk will have to deal with him.”

Gassiev will need to make sure he lands his shots with authority for him to win this fight. Usyk might try and throw a lot of shots the same way that Denis Lebedev did in his fight against Gassiev in December 2016. Gassiev didn’t let his hands go enough in that to knockout Lebedev. What was interesting about that fight was how Gassiev was able to hurt Lebedev when he would go to the body. After Gassiev knocked Lebedev with a body shot in the 5th round, he failed to continue to land to the body in the remainder of the fight. Sanchez should have been pushing Gassiev to throw more body shots, as those were the type of shots that was giving Lebedev the most trouble, but for some reason he chose not to go downstairs after the 5th.

Usyk will win this fight by staying at range, jabbing and using movement to keep Gassiev bottled up. Gassiev is a decent pressure fighter, but he’s slow on his feet, and not great at cutting off the ring. For Gassiev to beat a mover like Usyk, he would need to be quick at cutting off the ring, and much more aggressive than what he showed in his last fight against Dorticos. Gassiev was way too passive against Dorticos in the first eight rounds for him to be successful using the same approach against a fighter like Usyk. Gassiev tends to fight in the same way when he faces good fighters. He did the same thing in his fight against Lebedev, which is why the fight was so close at the end. Gassiev will likely fight the same on Saturday night against Usyk and he’ll fall behind and end up losing by a 12 round decision in what could be a dull fight.

Tony Bellew’s next fight down to three names: Fury, Stevenson or Ward »