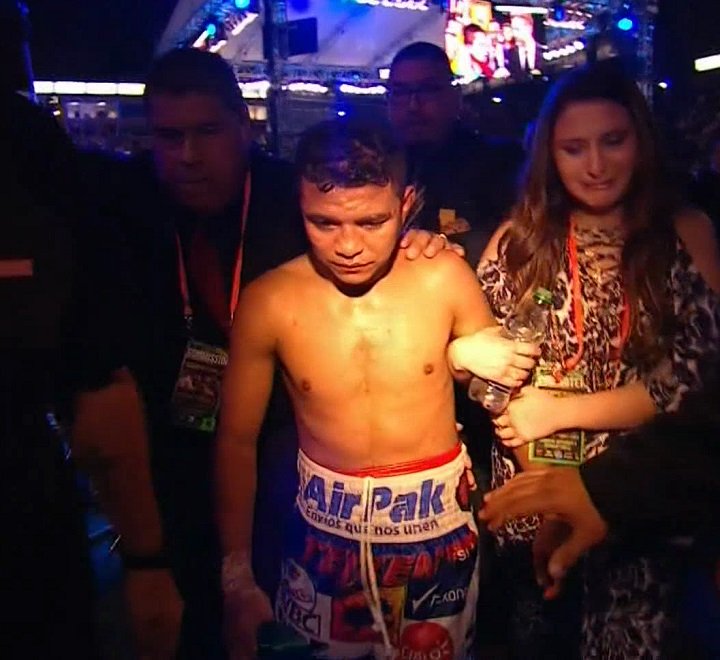 By Dan Ambrose: Roman ‘Chocolatito’ Gonzalez is a possibility to fight on the undercard of Saul Canelo Alvarez vs. Gennady ‘GGG’ Golovkin II on September 15 against potential opponents Pedro Guevara and Moises Fuentes, according to ElNuevoDiario.

Whichever of those two face Gonzalez, this is a crossroads fight for him. He cannot afford to lose the match if he wants to keep his career alive. To be considered a top fighter at 112 and 115, Gonzalez needs to be able to beat fighters in the caliber of Guevara and Fuentes. Those aren’t world championship level guys at 115. Gonzalez should be able to defeat them without going to the edge to get the victories,

Having Chocolatito on the Canelo vs. Golovkin II undercard might help increase interest in the card with the hardcore boxing fans, but probably not to any great extent. The fans will quickly catch on that this is a tune-up level fight for Gonzalez and not a tough one in which his opponent has a real chance of winning. Guevara and Fuentes are guys that Gonzalez should be able to beat with ease if he has anything left. That’s the big question. Gonzalez still has the power and the work rate to dominate Fuentes and Guevara. As long as Chocolatito’s punch resistance and confidence hasn’t been shattered from his recent fights, we can expect for him to get back to his winning ways on September 15.

The 30-rear-old Gonzalez (46-2, 38 KOs) has lost his last two fights and it’s absolutely crucial at this point that he gets a victory under his belt, as there’s a great deal of boxing fans calling for the Nicaraguan to retire from the sport. Chocolatito is still young, but he’s really taken a hammering in his last three fights against Srisaket Sor Rungvisai and Carlos Cuadras. Chocolatito would do better if he moved back down to 112, but he’s made no indication that he plans on doing that. For better or worse, Chocolatito appears to be staying at 115 for the time being. If anything, it wouldn’t be surprising if he moves up in weight to bantamweight in the future than it would be for him to go back down to flyweight where he had been dominating his opposition.

Former WBC light flyweight champion Pedro Guevara (31-3-1, 18 KOs) might be the tougher option for Gonzalez to potentially deal with on the Canelo-GGG II card on HBO PPV on September 15, because he’s only lost two fights in the last three years of his career. Those defeats came against Ken Shiro and Yu Kimura. Both losses were close ones. Guevara is a tough fighter with an excellent work. By now means is Guevara a faded fighter. He’s still very much in his prime at 29-years-old. Guevara won the vacant WBC 108 title in December 2014, beating Akira Yaegashi by a 7th round knockout. Guevara defended it successfully twice beating Richard Claveras and Ganigan Lopez before losing it to Yu Kirua by a 12 round split decision in November 2015. Since that loss, Guevara has won five out of his last six fights. Guevara defeated Angel Guevara by a 6th round knockout last May. Chocolaito might have a lot of problems beating Guevara if he’s not the same fighter he once was.

Former WBO minimum weight champion Moises Fuentes (25-5-1, 14 KOs) has struggled recently in lost three out of his last four fights to Ulises Lara, Kosei Tanaka and Daigo Higa since 2017. Fuentes avenged the loss to Lara in stopping him in the 1st round last October. However, in Fuentes’ last fight, he was shockingly halted in round one by Diago Higa last February in Naha, Okinawa.

As bad as Fuentes is looking now, Chocolatito should be able to beat him without too much trouble if he has anything left in the tank. That’s what we don’t know. Gonzalez has been a pro for 13 years, and he might not have much left in the tank to beat the best fighters in boxing. Obviously, Chocolatito could increase his chances for success if he were able to move back down to 108 or 112, but it appears that he has no desire to do so. It’s likely that Chocolatito can no longer make those weight classes comfortably enough for him to still be successful. Further, there’s more money for Chocolatito to make by staying at 115 and competing with Rungvisai, Khalid Yafai, Juan Francisco Estrada, Donnie Nietes, McWilliams Arroyo and Jerwin Ancajas.

It’s unclear whether Chocolaito has the natural size and punching power to beat those guys at super flyweight. We saw in Gonzalez’s last two fights against Rungvisai and Cuadras that his punching power isn’t adequate enough for him to dominate like he used to do when he was winning world titles at minimumweight, light flyweight, and flyweight.

Although Gonzalez did capture the WBC super flyweight title two years ago in beating Cuadras by a 12 round unanimous decision in September 2016, it was a grueling fight for him in which he took a ton of hard punishment to the head. That was a fight that was decided in the last four rounds after Cuadras gassed out. By no means did Chocolatito impress with that performance. After the fight, his face looked badly swollen up to the point where he was barely recognizable. It would have been a good idea for Gonzalez to take a long break after the Cuadras fight to recover. Instead of doing that, Chocolatito came back just six months later to face the big punching Rungvisai in March 2017. Gonzalez gave Rungvisai a really hard fight after being knocked down in the 1st round. Some boxing fans believed that Gonzalez deserved the win. However, the judges had the final say and they felt that Rungvisai had done enough to rate the victory.

Having Chocolatito on the Canelo-GGG II undercard is a good thing in terms of attracting boxing fans to purchase it on HBO PPV. A lot of fans aren’t too thrilled at paying to see the rematch between Canelo and Golovkin after the controversy surrounding their previous fight last September in Las Vegas, Nevada. Golovkin appeared to win the fight, but the judges scored it a 12 round draw. Five months later, Canelo tested positive twice for the banned performance enhancing substance clenbuterol while training for the May 5th rematch in Las Vegas. The fight was then canceled on three weeks’ notice, forcing GGG to find a replacement opponent. Canelo was given a six-month suspension by the Nevada Commission due to the positive tests for clenbuterol. The suspension expires next month in mid-August. Chocolatito being added to the Canelo vs. Golovkin II card should motivate some boxing fans that are undecided whether to order the fight on HBO PPV. Obviously, Chocolatito’s career isn’t at high enough point any longer to get a massive amount of boxing fans to order the fight, but he should be able to help bring in some undecided fans.

If Chocolatito loses on September 15, then he needs to think about retiring because he’s not going to go anywhere if he can’t beat the likes of Guevara or Fuentes. These are fighters that the top guys at 115 (Rungvisai, Yafai, Estrada and Ancajas) would easily beat if they were matched up against them. Chocolatito needs to prove that he still can compete at the highest levels of the super flyweight division. I’m not sure that beating Guevara or Fuentes will prove that, however. They’re not good enough fighters to prove that Chocolatito is still belongs among the best. What they will show is whether Chocolatito needs to hang up his gloves and retire from boxing. He’s got to be able to beat Guevara or Fuentes with ease for him to be still viewed as one of the top guys at 115.