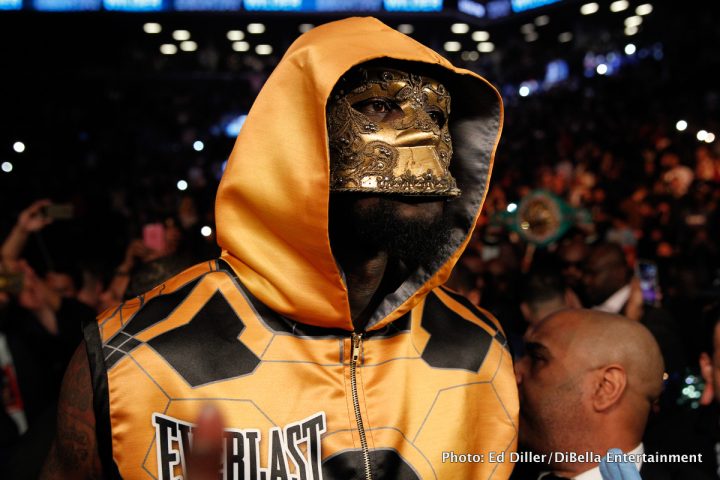 By Scott Gilfoid: Not only is Matchroom promoter Eddie Hearn not willing to increase the $15 million flat fee offer that he previously made to WBC heavyweight champion Deontay ‘Bronze Bomber’ Wilder to face Anthony Joshua (21-0, 20 KOs) on April 13, but he’s now saying that he thinks the American fighter should receive a smaller flat fee offer.

Hearn is really pushing hard to try and get Wilder to sign for the Joshua fight BEFORE AJ faces Alexander Povetkin on September 22. The likely reason for that is that the Joshua vs. Povetkin fight will likely bring in more money if the boxing public knows that Joshua’s next fight will be a huge unification match against WBC champion Wilder (40-0, 39 KOs). It’s the same thing with how Floyd Mayweather Jr. and Manny Pacquiao were able to bring in huge PPV numbers in their fights before they faced each other in 2015, because the fans believed that they would soon be facing each other. Hearn trying to get Wilder to sign for the April 13 Joshua fight now appears to be a way for him to drive up the PPV buys for Joshua-Povetkin.

It would work fine for Hearn if he were willing to give Wilder a fair percentage deal instead of giving him a lowball flat fee offer of $15 million for a fight that could potentially bring in $100 million. Hearn could likely get Wilder to sign quickly if he increased the offer to $50 million, but that would be risky for him to do because he doesn’t know how much money the fight will bring in. A percentage deal for Wilder would remove the risk on Hearn’s part, but that would mean that he would be giving Wilder a better deal, and it doesn’t look like he wants to do that. Giving Wilder only a flat fee offer means the revenue for the fight is heavily tilted in Joshua’s favor.

The reason for Hearn saying that Wilder should receive less than the $15 million flat fee is Joshua is defending against his World Boxing Association mandatory challenger Alexander Povetkin (34-1, 24 KOs) on September 22 on Sky Box Office at Wembley Stadium in London, England. Hearn thinks the fight will make Joshua an even bigger star than he is now. Hearn doubts that Wilder’s next fight, which could be against former heavyweight world title challenger Dominic Breazeale, will increase his popularity in the same manner.

“He was never on a percentage. He was on a flat fee, which he accepted,” Hearn said to skysports.com. “I think the fee should go down, because Joshua is going to fight Povetkin, and if he wins, his value will increase significantly, and I don’t believe that Wilder will be in a fight that will increase his value.”

Hearn seems to be doing everything for show at this point with the Joshua-Wilder negotiations, and not looking like he’s interested in making a true deal. Hearn says that some boxing fans don’t believe that Joshua is truly interested in facing Wilder. But by him having Joshua sign the contract and sending it to Wilder to sign, Hearn hopes to convince the boxing public that his fighter AJ REALLY wants the fight with Deontay. What Hearn isn’t telling the fans is the offer if a flat fee of $15 million instead of a percentage deal, which would allow Wilder to have a better chance of sharing the revenue for the fight. Since there’s no way of knowing how much money the Joshua vs. Wilder fight will ultimately make, it would be better for Hearn to offer Deontay a percentage deal instead of a flat fee. The flat fee offer of $15 million would be fair if the fight only pulls in $30 million to $35 million. But if it brings in a lot more than that, then Joshua’s purse would wind up dwarfing Wilder’s to the extent where it would be downright embarrassing, particularly if it reaches the $100 million category. Joshua would walk home with $85

million compared to Wilder’s $15 million. That’s an 85-15 split in Joshua’s favor if the fight brings in that kind of revenue.

NEWS:   Whyte Vs. Povetkin, Taylor Vs. Persoon II To Stream Live On DAZN ON Aug. 22

Despite saying that Wilder should be making less than the $15 million flat fee offer to face Joshua, the wily Hearn maintains that the offer is still on the table for him to take on April 13. Hearn plans on having the 28-year-old Joshua sign the contract for April 13, and then he’s going to send it to Wilder to try and tempt him to sign it. Hearn thinks that having the blank contract sent to Wilder will tempt him to sign it. I’m not sure that it will, but that’s Hearn’s belief. The way that Hearn is talking about Wilder, it would take a ton of desperation on his part to lower himself to accept the $15 million flat fee. The fight could pull in $100 million, so Wilder would need to undervalue himself to agree to a flat fee.

Well, it doesn’t sound like Hearn wants to make the Joshua vs. Wilder fight on April 13. The way that Hearn is talking, it seems like his intention is not to make the Wilder fight for next April. By telling the boxing public that Wilder doesn’t even rate the $15 million flat fee offer, which is clearly well below what the fight will bring in, Hearn is sending a negative message to the boxing fans and to Deontay that he doesn’t rate.

It’s doubtful that Joshua’s value will increase if he beats the 38-year-old Povetkin, as the Russian fighter has suddenly started to look like a faded fighter in his last three fights against David Price, Christian Hammer and Andriy Rudenko. The way that Povetkin looked in those fights, it’s doubtful that he’d beaten contenders like Dillian Whyte, Jarrell Miller, Joseph Parker, Tyson Fury, Adam Kownacki, Dominic Breazeale or Luis Ortiz, let alone Joshua or Deontay Wilder. Povetkin is suddenly performing like a 40-year-old rather than the fight that he’d been through most of his boxing career. If the casual fans are impressed with Joshua adding Povetkin’s scalp to his resume, then it might increase his value.

“The argument that he should get more money, when Joshua’s profile continues to rise doesn’t make sense. But the good news for them is – the offer is still on the table,” Hearn said.

Hearn says he’ll be sending the new contract to Wilder with a date (April 13) along with Joshua’s signature. Hearn would love for Wilder to sign the contract, as it would give Joshua a huge lion’s share of the revenue. It’s a great contract if you’re Joshua and Matchroom Boxing. It’s not a great contract for Wilder though, as he’s not being recognized for the value that he brings to the fight. Hearn is offering Wilder the type of flat fee that he would give to Joshua’s average opponents like Eric Molina, Carlos Takam, Povetkin and Dillian Whyte.

“We’re going to send them this week a new contract with a new date, and Joshua is going to sign the contract, so it’s even more black and white,” Hearn said.

Wilder’s manager Shelly Finkel feels that his fighter has looked better recently than Joshua with his wins over Luis Oriz and Bermane Stiverne. Joshua struggled in his last three fights against Carlos Takam, Wladimir Klitschko and Joseph Parker. Wilder has shown the kind of talent that suggests that he deserves a 50-50 deal for a fight against Joshua.