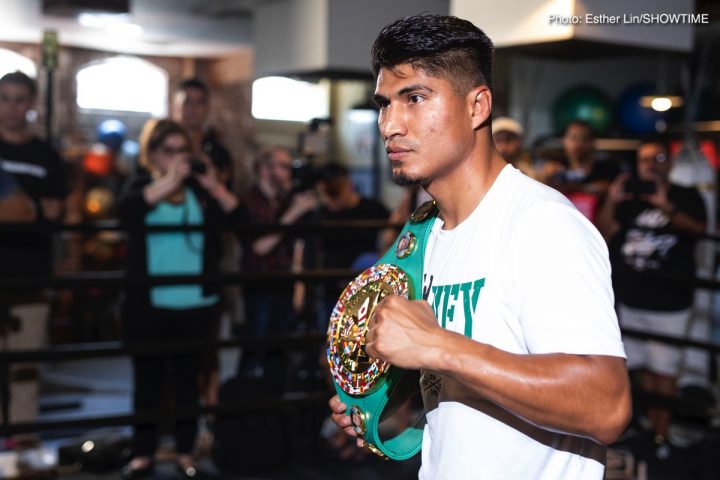 Mikey created a lot of attention last year when he moved up to light welterweight and defeated IBF 140 lb. champion Sergey Lipinets by a 12 round unanimous decision last March in San Antonio, Texas. Mikey made believers out of a lot of boxing fans with the way he defeated Lipinets. However, Lipinets is not considered to be in the same class talent-wise as the likes of Regis Prograis. What Mikey did against Lipinets might not be possible if he fought the best fighters in the light welterweight division like Prograis. Spence is considered a step above Prograis in talent, and it’ll be next to impossible for Mikey to deal with his power, size and talent.

Mikey says he likes the idea of the challenge of having to fight someone like Spence, because everyone thinks he can’t do it. Mikey, 30, wants to show them that he can. If nothing else, Mikey will prove the boxing fans wrong hat think he’s just talking about the Spence fight without any serious intent on actually facing him. Right now, it looks like Mikey is just name dropping Spence’s name to get attention to himself and his fight against Easter Jr. the easy way. Mikey won’t take as bad of a career hit in losing to Spence as he would if he were to face WBA World lightweight champion Vasyl Lomachenko and lose badly to him. It wouldn’t be nearly as bad of a career hit for Mikey to get beaten by Spence as it will if he loses to Lomachenko or some of the other fighters light Prograis, Danny Garcia, Shawn Porter and Keith Thurman.

“I can feel the size difference [fighting guys at 140],” Mikey said to Fighthub. “[I’ve had] Two fights at 140, against Adrien Broner and Sergey Lipinets — those fights, although we were at 140 on weigh-in, fight night they were a lot heavier. I was probably about ‘47, ‘48 on fight night, they were probably 155 or close to 160, ‘cause I could just feel the size, I could see it. But I still have the ability to fight and overcome that size disadvantage, that strength. So Errol Spence, a little different, ‘cause he’s also very talented. Technically he’s very, very talented, great fighter. And he still has that size and weight advantage, but that’s what excites me because everybody says no, you guys think it’s a joke and I’ma do it!”

Mikey needs to keep his attention on Easter Jr. right now, because that’s not the type of opponent that he can afford to overlook. He has too much talent for Mikey to look past him. Mikey hasn’t had to fight guys that are taller than hi during his career. Against the 5’11” Easter, Mikey will be giving away five inches in height and eight inches in reach.

“The other fight that excites me would be an Errol Spence fight and the challenges he presents are so great that that’s what motivates me the most,” Mikey said to RingTV.com.